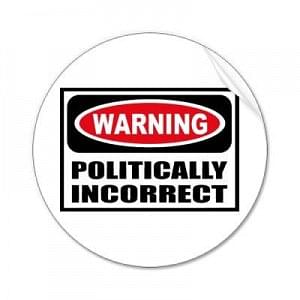 Political correctness and the consequences of such a stance.

In the right order of this series, this post should have come nearly towards the end. But then, given the recent event this is as relevant as it ever can be. The post is on Political Correctness. What does being politically correct really do to information transmission between two individuals? Does it really have any effect?

We can have our arguments and counterarguments for the same and that is where a bit of game theory comes in handy. Very often, not always, game theory gives you not only some insights about where the action is in strategic situations but also it points out the strength of forces that are responsible for the action.

I wish to talk about a paper written by one of the finest game theorists of the current times, an economist I admire, a great thinker, Stephen Morris from Princeton University. The paper is called Political Correctness.

Let’s build a story. There’s a decision maker called Narendra. There’s an expert on security matters called Ajit. Ajit is going to advise Narendra on what action to take regarding a certain policy. Ajit has a better idea about the underlying situation. The key thing is, both Ajit and Narendra want to take the same action depending on what the situation is. Let’s be a bit clearer on this.

Moreover, Narendra thinks that there’s a chance that Ajit may be biased. The biased Ajit wants to send Bangladeshis home irrespective of how their conduct is and wants to bomb Naxal areas irrespective of whether there may be a more peaceful solution to the problem or not.

Ajit has a better idea about what sort of activities Bangladeshis are involved in or what is a better way to handle Naxals. In a good world, where Narendra fully trusts Ajit, he would ask Ajit to recommend an action and would go ahead with it. But the world is not good!

There’s a problem! The problem is Narendra thinks that Ajit may be a biased man who hates Bangladeshis. Suppose he is sure that as biased as Ajit is, the current advice isn’t coming out of his bias, then he would still go ahead with Ajit’s recommendation. But the problem is, he can never be sure of such a thing. So when he hears Ajit telling him to send Bangladeshis back, he thinks in his head that this could be because of two reasons –

1.Bangladeshis are involved in illegal activities and hence it’s prudent to do so.

Depending on how he views these two factors, he will make a decision. This is where game theory comes in.  Ajit and Narendra both care about the decisions on both the matters. Narendra wants to make sure that Ajit is an unbiased person. Good Ajit knows this and so is concerned about setting his reputation right. The bad Ajit knows this and so is willing to lie a bit so that he ensures a fake reputation on which he can exploit later.

Why does reputation matter? It matters precisely because Narendra and Ajit are interacting repeatedly on various issues. Suppose Narendra thinks in his head the following –

1.In the first period, if Ajit recommends not to send Bangladeshis home then I know that he is a good guy so I will not send them home and tomorrow I will do whatever he asks me.

2.In the first period if Ajit recommends me to send back Bangladeshis he may be honest or maybe a biased guy. But this recommendation doesn’t help me learn anything about him. So I will ignore his today’s advice and tomorrow’s advice too. I will just flip a coin each day and decide what to do.

Now, the biased Ajit thinks in his head the following –

1.There’s no way I am getting what I want in both the periods. Since if I announce “Send them home” today then he’ll toss a coin and also ignore me tomorrow.

2.How about I say, “Don’t send them back home” today? Sure, I lose today but tomorrow I get to bomb the whole tribal belt! Ah, the joy!

So the bad Ajit decides to tell Narendra to not send them back home today.

But then, what does good Ajit do? He thinks the following –

1.If my research shows sending them back home is the best thing, I don’t know if I should say that. Because then Narendra will ignore my message today and tomorrow as well. So, let me lie today and ask them to be not sent home. That way, at least tomorrow I can get a better policy implemented.

2.If my research shows not sending them back home is a better thing, then I will announce that because then, today Narendra will believe me and do that and will also think that I am a good guy and so, will accept my recommendation.

But then, Narendra will go back and reason, if what he announced in the first place is a good strategy or not. In particular, if he hears Ajit saying, “Don’t send them home”, he has no clue whether it’s true or not. Because the bad guy has decided to announce to be perceived as a good guy.

The full-fledged analysis of the entire situation is way beyond the scope of a blog post. The key insight from the paper is the phenomenon described with the kind of reasoning between Narendra, the good Ajit and the bad Ajit. The good Ajit wants to say something, so that he can establish his credentials. But the bad Ajit can always mimic him, so that he possibly loses out once but then, after establishing his reputation can ride on it.

Narendra knows this and so he will be wary of any message and take it with a pinch of salt. When does this force become strong? Especially when the actions in latter periods are far more valuable to everyone, the force is acute. Because then Narendra is a lot interested in finding whether Ajit is a good guy or a biased guy.

The biased Ajit also cares about the actions in latter periods and hence can bear the cost of getting an action that he doesn’t like today just to be perceived as a good guy. The whole reasoning, in equilibrium, takes us to only one possible situation in a certain class of games when the payoff in the second period matters more than the first. It is that, in the first period Narendra always ignores what Ajit says!

This is the cost of political correctness. In order to not be perceived as biased the good Ajit is forced to lie and say something that he doesn’t believe in and the bad Ajit exploits this. Eventually, from Narendra’s perspective, this race between good Ajit and bad Ajit cannot be settled in the first period.

As Morris says in the conclusion:

“In the model of this paper, a speaker (advisor) communicates with the objective of conveying information, but the listener (decision maker) is initially unsure if the speaker is biased. There were three main insights from that model. First, in any informative equilibrium, certain statements will lower the reputation of the speaker, independent of whether they turn out to be true. Second, if reputational concerns are sufficiently important, no information is conveyed in equilibrium. Third, while instrumental reputational concerns might arise for many reasons, a sufficient reason is that speakers wish to be listened to”

What do we learn from this? Not just that political correctness has a considerable cost to the society but that there’s something inherently wrong about how people think of reputations when they hear certain things. Well-intentioned, informed people are lying not because they explicitly care about what others think of them but because they have to lie in order to be heard.

The whole assumption of rationality and common knowledge (something that will be elaborated upon in another post) in game theory or economics is not because economists think that people can compute probabilities of extremely complex events and situations in their head or have a utility function that they maximize. But it is that we want to see whether our institutions perform well when the smartest of the people participate as players. The cost, as always, is borne not just by Narendra and Ajit but also by those who are affected by their actions.

That, more than anything, is why we need to fight political correctness before it’s too late.

A miserable engineer turned into a PhD student in economics. He enjoys decision theory, matching, game theory. Other interests include maths and cricket.
Get Swarajya in your inbox everyday. Subscribe here.
Tags: