Why Sanskrit Imprints Easily On Your Mind 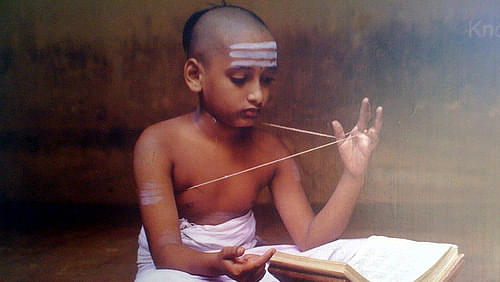 …because rhythm is a beautiful thing and Sanskrit gets its right!

An arrow shot by an archer, a poem made by a poet; Should cut through your heart, jolting the head. If it doesn’t— it’s no arrow, it’s no poem.

What is the jolting poetry our poet is talking about?

But before that — what exactly is poetry? This is a very hard matter to pin down. Modern poetry has blurred the line between prose and poetry. However, we can all agree upon this: literature can be of only two types —musical and non-musical. Sadly, preponderance of the printed word has brought the former to its knees.

Rhythm in words is a beautiful thing; the very sound of a syllable army marching in cadence to the poet’s beat adds a certain exuberance to the work and inspires enthusiasm in the reader. Good poets write with their ears, not their brains. Shakespeare knew this well, and it is one of the secrets behind the deep imprints he left on the English idiom. But India has been the undisputed master of the art for over 4000 years. Frenchman Jean Le Mée has this hair-raising observation about the roots of India’s adoration of the spoken word:

“Precious stones or durable materials— gold, silver, bronze, marble, onyx or granite — have been used by ancient people in an attempt to immortalise themselves. Not so however the ancient Vedic Aryans. They turned to what may seem the most volatile and insubstantial material of all— the spoken word. The pyramids have been eroded by the desert wind, the marble broken by earthquakes, and the gold stolen by robbers, while the Veda is recited daily by an unbroken chain of generations, traveling like a great wave through the living substance of mind.”

4000 years! Even the proverbial Dhruva tāra (the pole star) wobbles on such time scales! The Veda stands frozen in time, not conceding an inch to the waves of language change that pound again and again. In fact, the Indian belief in the mantic power of the vigorously spoken word persists to this day — the day opens with Suprabhatam, communities do mass pārāyaṇa (recitation) of texts, rituals revolve around chants and the average Indian (unconsciously) commits more poetry to memory than most other cultures do.

This intimate connection of the Indian with his language, I suspect, is the shield behind which India has preserved her ancient culture, withstanding centuries of invasion. Rhythm imprints easier on the mind than meaning. As language copies itself from parent to child, all the cultural memes too duplicate. Language acquisition, being a very intimate family-child interaction, is difficult to tamper with by imposition. Thus, culture propagates through the vehicle of language, sometimes growing, sometimes hibernating, but preserved nonetheless.

At the foundation of this great oral tradition of India lies the wonderful prosody of its languages. Most Indians would have experienced the magic of verse at some point, as it takes life from the lips of a seasoned reciter and manages to arouse emotion through the sheer power of sound alone. But enough of this dry sermonising; let us now listen to some verse from Sanskrit, Latin and English.

Remember that the musicality is due to the syllables, there are no musical notes here!

Here is the booming, ringing sragdharā “garland-bearer”. A verse from vishnu-sahasranāma in the voice of M.S. Subbulakshmi:

Here is śikhariṇī “the peaked”. A verse from śankara’s saundaryalaharī in the voice of śatāvadhānī R. Ganesh. (Note how the meter inspires the feeling of climbing higher and higher, like a metrical analogue of the Shepard tone.)

Now take a look at Latin— the famed opening lines of Aeneid in Dactylic Hexameter.

The sonorous ring and bouncy vigour of Sanskrit is completely missing! The monotone of Latin ektāra pales in front of the reverberant Sanskrit vīṇa

This is more pallid still! More elocution than rhythm!

Well crafted sound, when combined with meaning, develops the ability to evoke visceral reactions in the reader. After all, speech is the most natural form of language. Spoken language is hardwired into our brains at the deepest levels. The written word is artificial — an invented convenience. Once we realise this, the conclusion is inescapable— good poetry must unite both sound and meaning for it to “cut through the heart and jolt the head”. All greats poets have recognised this— T.S. Eliot had his “auditory imagination”, Robert Frost had his “Sound of Sense”.

Unfortunately, their own language was too inflexible to allow experimentation with sound. In this sense, though ‘dead’, Sanskrit has more spring in its step than any other language.

All this talk about sound is to impress upon you that verse must be appreciated through the mediums of both sound and meaning. Else, the experience remains incomplete. As Stephen Fry says:

Poetry is not made to be sucked up like a child’s milkshake, it is much better sipped like a precious malt whisky.

And I hope that’s what you will begin to do.

Now, a little tidbit before we close:

Not just India, the whole of humanity has an age old belief in mantic power of language (Yes, even now—think of tattoos). In the 15th century, the word “grammar” had connotations of magic, enchantment and the occult. When the word was borrowed by the Scots, R changed to L and the word become “glamour”. After evolution on different tracks, they acquired their usual meanings. Now, who would have imagined that grammar is glamour!

(The translation of the mentioned verse is by Shulman and Narayana Rao. They have translated a translation by a Telugu Poet, Nannecoḍuḍu. I have presented the Sanskrit original.)