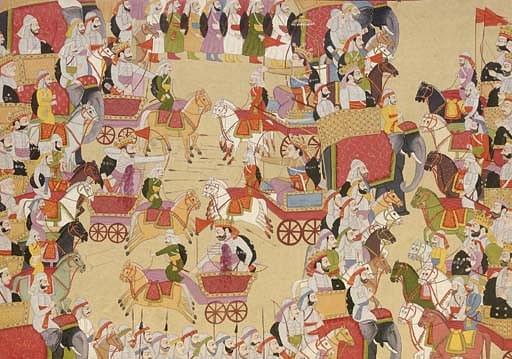 Reflections on the overlooked facets of Yudhisthira’s multilayered character.

Yudhishthira is revered as dharmaraj, the man who never uttered a lie (except for one very prominent occasion during the war and at least one other occasion when he knowingly chose to remain silent lest he be proven a liar). Yudhishthira saved his brother Bhima when he had been trapped in a python’s coils – Nahusha in a cursed form.

Yudhishthira’s wisdom was what revived his brothers during the famous Yaksha prashna samvad in the Aranyaka Parva. His insistence on the truth was noble, indubitably, but at times it grated. His brothers – Bhima mostly, but Arjuna too – chafed under the yoke of what they considered as an unreasonable burden of dharma.

But it was Yudhishthira who gambled away his kingdom, his brothers, himself, and even his wife – writing himself into the history books, in a manner of speaking. When, in the forest, Droupadi asked him why he was not filled with anger and sought revenge against his cousins for having behaved in so despicable a manner, he repeatedly counselled forgiveness. That may well have been prompted by a pragmatic realization that the Pandavas were militarily weak and no match for the mighty Kouravas. It was thus that we get to Indralokabhigaman Parva, where Arjuna travels to Indraloka in a quest for celestial weapons.

When the war began, on that fateful thirteenth day, it was Yudhishthira who was outright supportive of sending Abhimanyu into Drona’s Chakra vyuha. After his young nephew was killed, Yudhishthira was utterly remorseful. “He was a child. He was young. He was not skilled in battle. What good could come from placing him in danger?” He worried about Arjuna’s and Subhadra’s reaction – “How will I cast my eyes on Kounteya Arjuna? How will I glance at the immensely fortunate Sbhadra, without her beloved son?” [7.49, Vol VI]

Can you blame Yudhishthira, and blame him alone, for sending Abhimanyu into battle? Could you not hold Arjuna at least partially responsible, for having accepted the Samshaptaka’s challenge and allowing them to lure him away far, far away from the heart of the battlefield? Yes, in a manner of speaking. But it is useful to take a look at the text and see what Yudhishthira’s role was on the morning of the thirteenth day:

“Having formed the view that Drona was incapable of being resisted by anyone else, Yudhishthira imposed that heavy and unbearable burden on Subhadra’s son.” [7.34, Vol VI]

Having made up his mind, Yudhishthira went up to Abhimanyu and exhorted him thus:

“With the exception of you, Arjuna, Krishna and Pradyumna, there is no fifth person who can penetrate the chakra vyuha. O Abhimanyu! O son! I am asking this boon and you should grant it to me.” [7.34, Vol VI]

Abhimanyu was well aware that, while he could get in, he didn’t know the way out of the vyuha – “But if I confront a calamity there, I do not know how to emerge.” [7.34, Vol VI]

Yudhishthira reassured Abhimanyu saying, “On seeing you enter, we will follow and protect you from all the directions.” [7.34, Vol VI]

Amidst this crescendo of bravado, only Abhimanyu’s charioteer seemed to have kept his head about him. He sagely cautioned Abhimanyu, “An extremely heavy burden has been placed on you by the Pandavas. You should advance to the fight only after you have thought over whether you have the capacity to bear this. … You have been reared in extreme happiness and are not skilled in fighting.”  [7.35, Vol VI]

We know how that battle turned out. But I digress somewhat. Let’s move ahead to the end of the war. On the last day of the war, Kripa, even at this late stage, continued to counsel Duryodhana, “If you are able to obtain the kingdom by bowing down before the king (Yudhishthira), that would be superior to heading towards the folly of defeat.” [9.3, Vol VII]

Duryodhana was characteristically unyielding, though, now somewhat subdued, “I have enjoyed the earth, right up to the frontiers on the ocean. How can I be satisfied with the pleasures of a small kingdom, obtained through the favours of the Pandavas?” [9.4, Vol VII]

From insisting that he would not yield to the Pandavas even as much land as could be measured by the tip of a needle, he was now staring at the prospect of being gifted a “small kingdom”, and that too through the mercies of the Pandavas. Such had been the reversal of fortunes.

But even this was to give way to an almost plaintive plea for mercy when Yuddhishthira and the Pandavas found him, hiding in a lake. This is what the Kourava had to say – “I will clad myself in deerskin and leave for the forest. … I have no desire for the kingdom,” [9.30, Vol VII]

How did Yudhishthira respond?

“O Suyodhana! You may be capable of giving it to me, but I do not wish to rule over something that has been given by you. … You are not the lord of this earth that you can give it away.” [9.30, Vol VII]

And then come the most chilling words that Yudhishthira utters in the entire epic (his acquiescing to gamble Droupadi would qualify as shameful words, not chilling):

“If, between the two of us, both of us remain alive, all beings will be uncertain about who emerged victorious.” [9.30, Vol VII]

Yudhishthira had made this a fight to the death. No quarters were to be given. For one side to be the undisputed winner, the other side had to die. Gone was the talk of forgiveness. This was Yudhishthira demanding a duel to the death. A facet of Yudhishthira that’s often overlooked. What do you make of it?

By the way, do you know that Sanjaya had taken part in the war? He returned to the Hastinapura towards the end of the eighteenth day of war. He was captured by Dhrishtadyumna, who “laughed” even as he uttered these words to Satyaki with terrifying nonchalance, “What is the point of capturing this one? Nothing will be gained by keeping him alive.” [9.28, Vol VII]

Note: I have used Dr Bibek Debroy’s Mahabharata, Volumes 6 and 7, an unabridged English language translation of the Critical Edition of the Mahabharata, published by Penguin India in 2012 and 2013, respectively, as my reference.