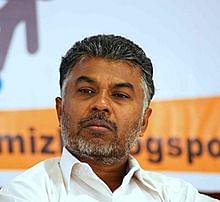 Outlook and People’s Democracy recycle The Hindu’s false report that these organisations demanded a ban on Perumal Murugan’s book. The track record of communist parties is not clean, but these media houses never point a finger at them while choosing to defame a local community with fiction masquerading as history.

When in 2014 the community outfits of Tiruchengode, a small town famous for its temple of Ardhanarishwara (the form of Shiva as half male and half female), woke up to the controversial portrayal of their history in a Tamil novel, it had already been four years.

The controversy centred around the depiction of what came to be referred to in the English press as “traditional, free, consensual sex rituals held once in a year during the car festival of the temple in the past”. There was expected ruckus and hurt feelings. And then the charade began.

On 27 December 2014, The Hindu reported prominently, “BJP, RSS seek ban on Tamil novel, arrest of author.” Given the fact that both the RSS and BJP are national organisations, if they were to demand the ban of a book, would they not convene a press meet and, only if a demand is made in such a press meet by a competent authority, then alone would the heading be truthful. Otherwise it was merely unethical journalism aiming to tar the party and its parent organisation as enemies of freedom of expression.

True, some cadre belonging to these organisations have participated in protests along with other community groups, as reported in local newspapers, but the national newspaper isolated and projected these two organisations as enemies of liberty.

Again on 12 January, the newspaper reported clear denial by the RSS and BJP. RSS spokesperson N Sadagopan had stated categorically that his organisation does not indulge in such activities. The most amazing thing is the way the fabricated news of RSS-BJP and ‘Hindutva’ outfits demanding a ban on the novel was taken up by a section of the national media.

Here is the comparison of the report manufactured by The Hindu and The Outlook:

Alleging that Tamil writer Perumal Murugan’s novel, Madhorubhagan, has portrayed the Kailasanathar temple in Tiruchengode and women devotees in bad light, the BJP, RSS and other Hindu outfits have demanded its ban and the arrest of the author. They burnt copies of the book on Friday at Tiruchengode. … Madhorubagan… revolves around childless couple Kali and his wife, Ponna. Their predicament is discussed in the backdrop of the “traditional free, consensual sex rituals” held once in a year during the car festival of the temple in the past.

The BJP, RSS and other Hindu outfits have reportedly demanded a ban on Tamil writer Perumal Murugan’s novel, Madhorubhagan, alleging that it portrays the Kailasanathar temple in Tiruchengode and women devotees in “bad light”… Madhorubagan tells the tale of a childless couple, Kali and Ponna. Their predicament is discussed in the backdrop of the “traditional free, consensual sex rituals” held once in a year during the car festival of the temple in the past.

Now the thread is taken up by the official organ of the CPI(M), People’s Democracy dated 11 January and the write-up is by comrade SP Rajendran:

… Alleging that Perumal Murugan’s novel, Madhorubagan, has portrayed the Kailasanathar temple in Tiruchengode and women devotees in bad light, the BJP, RSS and other Hindu outfits have demanded its ban and the arrest of the author. They burnt copies of the book on December 26 at Tiruchengode in Namakkal district. … In the novel, Ardhanareeswara, the presiding deity of Tiruchengodu temple, revolves around childless couple Kali and his wife, Ponna. Their predicament is discussed in the backdrop of the “traditional free, consensual sex rituals” held once in a year during the car festival of the temple in the past. Kali resists attempts to make his wife participate in the ritual, but in the end he is shattered when he finds her missing from home.

So here we have fabricated news of RSS and BJP demanding a ban of a book and then the report is rehashed and recycled. Cartoons are drawn; editorials fume and ‘Hindutva’ is demonised.

Both the RSS and BJP have been very reluctant about banning books. When demands were made to ban Jeffrey Kripal’s book on Sri Ramakrishna, LK Advani rejected that demand.

RSS had earlier stood for the publication of the Riddles of Hinduism, written by BR Ambedkar, even when the Shiv Sena demanded that the government drop it from the collected works of Ambedkar, which was to be published by the government. (The present writer made a factual mistake by saying that the Riddles… controversy erupted after the ban of Salman Rushdie novel. Actually it preceded the ban on The Satanic Verses.)

Now let us also look at the track record of those who are so vocal in protecting the freedom of the expression.

As we were about to board a car to go the railway station, the key was snatched from the driver and we were surrounded by about five muscular young men. Handsome, well-dressed and normal-looking guys. But their faces revealed a madness that only sectarian, dictatorial, fanatic politics can breed.

No, the above is not about Murugan surrounded by the community protesters; in fact, he was never manhandled. That was Paul Zachariah, the Malayalam writer writing in The New Indian Express, and he was manhandled by the storm-troopers of the DYFI, the youth wing of CPI(M), because Zachariah had protested moral policing done by the communist organisation in collusion with an Islamic fundamentalist group, the PDP.

The columnist had pointed out that the early leaders of Marxist movement in Kerala lived “lavishly, indulging in sex”. The CPI(M) was the ruling party in Kerala. Three days earlier in the DYFI state conference Marxist leader and Politburo member Pinarayi Vijayan had justified the attack, drawing a very interesting parallel:

“What would happen if a speaker tried to cast aspersions on Christ at a meeting attended by Christians only?”

Unlike the DYFI storm-troopers, the community activists had no ideological training. They have no idea about deconstruction of post-modernism or the power of narrative that is being built about them in academic citadels of power to which they have no access. Yet despite their crude and rude way of protests, it is to their credit that they eschewed the path of violence.

While the leftists and a section of the media see this as an opportunity to attack the party ruling at the Centre and the main school of thought it draws its people from in a blatantly fabricated campaign, the real issue transcends the problem of freedom of expression and raises some far serious issues.

Murugan’s ‘novel’ was actually a project work undertaken under a grant from India Foundation for the Arts (IFA). The NGO, according to its website, is “a national, not-for-profit, grant-making organisation that supports practice, research and education in the arts in India”. In their 2005-06 report, the grant given to Murugan is mentioned thus:

For research towards the writing of a novelised history of Tiruchengode in Namakkal district, Tamil Nadu. A town with an ancient history, Tiruchengode is today marked by its hill temple dedicated to Murugan and Ardhanareeswara but is also known for its vibrant modern industry.

In the course of writing a historical account of Tiruchengode, the author will document references to the town in literature, folklore and mythology, analyse the town’s design and study its ritual and religious life.

In other words, the ‘novel’ itself is not exactly a work of fiction and creative imagination. It is not a novel set in a historic milieu. It attempts to document social history of the region in the form of a novel. And the author is also duty-bound to “document references to the town in literature, folklore and mythology, analyse the town’s design and study its ritual and religious life”, as per the IFA website.

In his review of the novel, historian Theodore Baskaran calls the ‘novel’ a repository of documentation. The reviewer specifically points to the alleged consensual extra-marital indulgence of sex by married woman on a particular day of the festival. The reviewer states that he had “known” (not seen) that such customs did exist in the local festivals of two places where he had worked.

Then the reviewer points out that Murugan has asserted that the traditional phrases prevalent in Tamil society like ‘the God-given child’ actually refers to the child being born out of such consensual ritual sex.

The novel has been promptly translated into English and published by Penguin. Now, in the universities both in India and around the world, this novel has turned into a document of the existence of ‘traditional free consensual sex rituals’ in Tiruchengode!

The claim of the residents of the temple town that even a nonagenarian community leader has never heard of such a tradition in the area would never reach the ivory towers of such academic institutions.

When such an asymmetry in the power of narrative exists in our academic institutions — both within India and abroad — it becomes important for a healthy democracy and a vibrant academic discourse that the community targeted is given a chance to challenge the narrative through absolutely legal and democratic means. And in such a situation, the writer should and does have a moral right to prove the factual nature of what he had written.

If the writer can come up with proper documentary and properly recorded oral traditions, the community should look inwards and make an unqualified apology to the writer. Freedom of expression is sacrosanct in any civil society and more so in Indian society, which has traditionally nurtured diversity and has considered loving irreverence and even blasphemy as a rightful form of adoration of the divine.

On the other hand, if the writer cannot substantiate what he had written, he must tender an unqualified apology, not for hurting anyone’s sentiments, but for libel against the people living in the town.

After all, the grant says clearly that he is not writing a historical novel, but novelising history, and that “in the course of writing a historical account of Tiruchengode, the author will document references to the town in literature, folklore and mythology, analyse the town’s design and study its ritual and religious life.”

In the present Tamil literary milieu, this is of immense import. Let it be known that one of the left wing publishing houses that has published Murugan’s work has also published the translation of another fiction masquerading as history in the ongoing Chennai book exhibition: The protocols of the learned elders of Zion, translated into Tamil by Aroor Salim.