‘Oh, Doctor!’ Wendy Doniger On The Couch (A Tantric-Psychoanalysis) 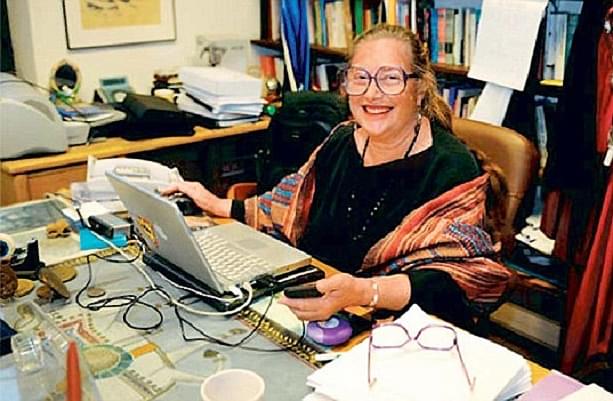 Rajiv Malhotra interviews Stuart Sovatsky an American scholar and practitioner of Psychology and Hindu traditions on the Wendy Doniger syndrome.

Note: Stuart Sovatsky is an American scholar and practitioner of Psychology and Hindu traditions for the past 40 years. We have known each other for 15 years and worked on many projects together. In fact, he supported my critiques of Wendy Doniger since the early days of that debate and hence he is cited in the book Invading the Sacred as well as my early blogs on the subject. Recently, I interviewed him on the scholarship of Doniger. As a professionally trained Freudian Psychoanalyst among other disciplines, he brings expertise to this debate which it has lacked.

Rajiv: You are a brahmacari-tantrika for a few decades. What is your favorite tantric shloka?

She [kundalini] cleans the skin down to the skeleton (233)

…[then] the yogi is known as Khecar [tumescent tongued]

Can Resort to Pariyanga [tantric “sex”]

Rajiv: Do you see a way in which this tantra perspective from centuries ago can help resolve the turmoil surrounding Wendy Doniger’s usage of psychoanalysis to interpret texts?

Stuart: Yes, the central topic of my own forty years of sadhana, clinical and scholarly research is the absolute misfit of using psychoanalytic-sexology to shed any useful light on tantra-vidya. The fact is that tantra-vidya is so saturated in devotional bhakti and stages of body-psyche maturity like khecari and kundalini. These are far beyond Freud’s so-very-limited, “final stage” of maturity which he quite pointedly named, “the genital personality.”

Rajiv: So, what I call an “invasion of the sacred” is consistent with what you regard asdistortions caused by scholars such as Doniger when they try to psychoanalyze these ancient texts used in sadhana.

Stuart: Yes, India’s culture is so rich in the Krishna-lila imagery of endless charming flirtations and mystical dalliance inclusive of a spiritual-eros state of conscioiusness far beyond the fathoming capabilities of modern man. Sringara Rasa of myriad enjoyments is already present in the collective Hindu-Indian imagination: then what need at all does dharma-vidya have for a psychoanalytic “invigoration” of its traditions? In my opinion: almost none.

Rajiv: Do you have some examples of how psychoanalytic distortions make more problems than they solve?

Stuart: Freudian ideas would make a travesty of khecari mudra, a word which I very, very carefully translate as “lingual-pineal puberty of the Soul identity,” that transforms the entire endocrine chemistry. This transformation results in ecstatic, reverential feelings and electrifying “tumescences” that infuse the inner and outer life. These experiences go way beyond Freud’s reductive psychology of “desire” and its “genital primacy ego.” Nearly a century ago, Freud called yoga “a killing of the instincts.” Later, he pathologized all spiritual experiences by calling these “oceanic feelings” a fearful “regression to the womb.” So the core problem is a clash between Freud and yoga, because Freud sees the yogic higher states as serious mental disorders.

Rajiv: Have there been any significant consequences to this pathologization of meditative states by these psychoanalysts?

Stuart: Unfortunately, yes. I worked with psychologist and psychiatrist colleagues for twenty years to change the American Psychiatric Association diagnostic code book, the DSM-IV. My effort was to differentiate those who seek the “oceanic feeling” via meditation or bhakti longings for union, from those persons with psychiatric disorders. From Freud on, these psychiatrists had lumped meditative states with the severe “Depersonalization – Dissociation Disorders.” Doniger’s decades of Sanskrit scholarship shows that she does not understand how psychoanalysis has a long history of distorting Indian dharma, not shedding light on it.

Rajiv: You are broadening the scope of the Doniger havoc beyond the ivory tower and public drama into the ripple effects on people’s lives.

Stuart: Yes, this is real stuff! This distorting of tantric texts by these psychoanalyzing scholars gives more legitimacy to the errors perpetuated by psychiatry in this area; it harms ordinary people hoping to uplift their lives. The West has Adam and Eve with their “enmity between man and woman” as a core background myth to contend with.

Moreover, Freud’s odd choice of the Oedipus Myth of child-parent sex and hatred, has ruled my profession for a good fifty years. Radhe Krishna on the other hand, is a beautiful idealization of romantic love. I begin many of my marriage therapy sessions by showing couples headed towards divorce, the sandalwood carving of Radhe Krishna lovingly gazing at one another that I have had in my office since 1987. It turns their heads completely around! And this includes Hindu and mixed-marriages in the US.

Rajiv: What about Indian marriages today? Doniger stirred a hornet’s nest with her psychoanalyzing of Indian culture.

Stuart: Your question reminds me of a couples’ workshop I led after one of our conferences in India, which focused on improving communication skills in almost all marriages, Indian and others. But, instead of using the Freudian-shaped psychodynamic “let it rip” idea of marriage counseling that too often breaks couples up, I shared tantricdristhi of opportune moments of gazing at one another (during a moment of admiration, sorrow or gratitude) or nyasa sacred touch to deepen the love between these long-married spouses.

But, once again, the core values of lifelong marriage and family life and any aspirations for a “sacred sexuality” need not and should not get supplanted with Freudian genital-centric preoccupations. A best-selling pop-sexuality author wrote Life is Too Short for Tantric Sex in which he assumes that tantra has no place in today’s fast paced world because it requires maturity. This same erotic-impatience creates the too-hip cultural mood that leads to many unnecessary divorces and broken homes of the so-called, “liberated” modern world. Indian marriages can and indeed should instead turn to the lifelong-developing paths of tantra. (See this 1982 study for more on “psychotherapy in India” )

Rajiv: So, contemporary Indian therapists, rather than blindly aping Western therapy models, can draw from tantra, grihastha and bhakti teachings.

Rajiv: So, even the eroticism of so-called “modern sex” falls short of tantra? And what about the yogi’s path?

Stuart: Yes, when we add in the inner marriage, the saintly-ecstatic manifestations of brahmacarya of the yogis and the Buddha’s bliss (that is completely distorted when translated with the baggage-laden term, “celibacy,”), there can be only one conclusion: Psychoanalysis is obviously helpful to its true-believers, but is incapable of non-reductively dealing with tantra-vidya. In this regard, Invading the Sacred should be required reading for all scholars of tantric texts. My own book, Advanced Spiritual Intimacy is a 300-page discussion and protection of this holy of holies to uplift lives, families and marriages beyond the psychoanalytic “liberation,” worldwide.

Rajiv: We aren’t alone in critiquing the limitations of psychoanalysis. Who else did you find that has published such warnings?

Stuart: As early as 1955, Herbert Marcuse warned in Eros and Civilization of the de-spiritualizing effects of this exclusively “bio-sensate” psychoanalytic theory and called for a “re-spiritualization of the instincts.” Jung, of course, was excommunicated from the Freudian fold for asserting that the life energy (prana) should be seen as spiritual in nature. And earlier still in 1932, Aldous Huxley’s Brave New World envisioned a futuristic and coldly mechanistic “sex-centric” world that has become only too real, such that even its more liberal proponents now speak out that aspects of “modern sex” may have gone too far.” [1]

Rajiv: Jung and Huxley were, of course very much basing their ideas on what they learned from Hinduism. Foucault is legendary in today’s academia. What did he say about protecting ars erotica wisdom from this “psychoanalytic gaze?”

Rajiv: In other words, this Freudian project is violent when applied to non-Westerners who do not suffer from the Adam-Eve original sin complex to begin with. What about the psychoanalytically-trained, early anthropologists who studied the non-Western “other?”

Stuart: The early anthropologists (Mead, Benedict, Malinowski) who gazed upon “other” cultures through the psychoanalytic lens, as if from superior heights, came to similar conclusions: this lens is not a “clear, illuminating magnifying glass,” but a funhouse mirror of Oedipal distortion and “hyper-repressive desublimation” (Marcuse’s term) more likely to distort than to reveal its “object” of study.

Rajiv: Sudhir Kakar, who delivered the keynote address at the World Spirituality Congress of which you and I were co-conveners in Delhi in 2008, made an interesting comment defending Wendy Doniger. He said, “Psychoanalysis could very well have been Indian, and Freud a tantrikguru”[2]

What do you make of that?

Stuart: A freeing-up of people from their anxieties and facilitating their longings for love and pleasure is a wonderful thing. Had Freud actually been a highly devotional and mature tantricguru, learned in the ars erotica of India instead of only devising his “scientia sexualis” altogether entangled with Judeo-Christian teachings on “sin” and “fallenness,” Doniger could have used this ars erotica lens in her Indological studies.

With this very different and respectful lens, she could have helped to reveal these tantric depths, for the good of all. Indeed, in this fantasied, ars erotica “tantric Freud,” The Hindus: An Alternative History would now itself have an “alternate history.” Such a (hypothetical) book would be appreciated by all concerned.

Rajiv: Should Indian Psychology seek to free up certain sectors of the Indian populace—as Doniger and Kakar also point to?

Stuart: Here I strongly warn against imitating the Western “sexual liberation.” But I enthusiastically encourage a reinvigoration of India’s indigenous ars erotica energies, its love of the lifelong intact marriage and family lineages and, not the least, its reverential eroticism such as Thirumular notes in my opening quote to this article. Jnaneshvar echoes this further:

Attaining this [tantric khecari] state is a miracle (296)

Shakti and Shiva become one

and in their union, everything…gets dissolved (306)

Further, there is nothing more to experience beyond [this]

Hence, let me stop speaking of it

Selected readings and references in next page.