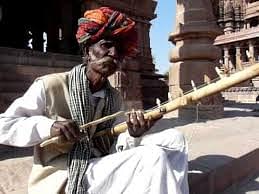 If you have ever set out on an impossible mission dictated by your spirit, you will find a lot to smile about when you read Finding the Demon’s Fiddle: On the Trail of the Ravanhattha.

Finding the Demon’s Fiddle – On the Trail of the Ravanhattha, Patrick Jered, Tranquebar

In one of our communications, author Patrick Jered had expressed his concerns about how his book would be received in the market, considering it didn’t quite fit in any neat genre. It is not an academic work, nor is it a novel, neither is it entirely a travelogue. But then, when has the call of passion been bound by convention? Jered also worried about the volume of his work and wondered if its six hundred plus pages would turn off a reader. Having just finished his book, I can tell him that his fears are quite unfounded.

Ravanhattha literally means ‘Ravana’s arm’ and there’s a popular mythological story about its origin. The demon king, Dasagriva, once decided that the Mount Kailasa had to be moved and lifted it with his mighty arms. The shaking mountain disturbed the sweet slumber of Shiva and Parvati. Enraged, Shiva pressed down upon the mountain with his big toe trapping Dasagriva underneath. The demon king howled in pain and was thereby given the name, Ravana – the one who screams. On Brahma’s advice, Ravana started praying to Shiva seeking respite. He sang praises of the god for thousands of years, in accompaniment with an instrument. This instrument, he fashioned out of his own arm, having wrenched it out and using the veins as strings. Finally, Shiva was pleased and he let off Ravana with blessings and a token. The token was a powerful lingam infused with Shiva’s very essence. This myth that occurs in the Uttara Kanda of the Ramayana, forms the starting point of the author’s many adventures.

Because the Ravanhattha is primarily found in use in Rajasthan, Jered bases most of his research in that state, beginning with the clan of Bhopa priests. These priests belong to the cult that venerates Pabuji, a local folk hero. These priests worship the ascetic warrior god in the form of sacred paintings called pars, before which The Epic of Pabuji is sung in night-long sessions. This long epic, which takes up to 36 hours to recite fully, has been passed down to generations through the oral tradition. To his great surprise, the author finds a Ravana connection in the epic, although it is a much later composition than the Ramayana.

Another fact that intrigues him is that an instrument supposedly invented by the demon king should be used to sing the praises of his nemesis and hero, Pabuji. He sets out to find answers to these glaring oddities in tradition and the journey takes him from heritage hotels to remote villages, from tourist tracks to shrines in the wilderness, from academic bookstores to homes of the Bhopa priests. He starts by going to geographical locations mentioned in the epic and local tales to establish the historicity of Pabuji and possibly even Ravana. He learns about the rituals and traditions of the Bhopas in some detail, as also of some other the parallel cults in the area, like the cult of Rupnath. His research trail leads him from Bisrakh – the birthplace of Ravana to an obscure village called Ravan in MP where the demon king is worshiped as the guardian deity; from the graves of academics like Tessitori in Bikaner, all the way to the war-torn area of Trincomalee in Sri Lanka.

But more than the historic and cultural gleanings, it is Jered’s takeaways from the people of India that make this book such an endearing read. Unpretentious and accepting, the author makes friends easily along the way. A rickshaw-pulling street kid, an expat yogi, a famous Bhopa priest, a mystical seer, a driver, an academic and some others form quite the melee in his narrative. He forms special bonds with each of these people who appear serendipitously, helping him in his quest. People and places fall in line as if guided by a higher power. The author’s portrayal of these people is honest and intimate. He is meticulous, even obsessive, in recording the details of not just his research findings but also human behaviour. There are incisive and humorous observations about people and stereotypes. He does not even spare himself and often resorts to self-depreciating humour. His frustrations and exultations are very real and one cannot help but nod in agreement ever so often. Despite the length of the book, Jered manages to hold the attention of the reader with his lucid style. His research is in- depth, but he never tries to emulate the scholars he references. His voice is fresh and casual.

But the reading experience is often marred by some phrases that the author uses over and over again. It seems like he kept running out of vocabulary when describing certain characters or felt strangely compelled to use a stock phrase each time the character was mentioned. For example, each time Surpanakha’s character in mentioned, Jered compulsively precedes the noun with ‘Ravana’s shockingly ugly sister’. From a publisher like Tranquebar/Westland, one would expect a little tighter editing.

However, one can ignore some stylistic fallacies because the book is highly informative. It throws in many surprising facts pertaining to Ravana mythology. Apart from the Pabuji angle, of great interest is the Buddhist view of Ravana as Jered discovers in Sri Lanka. Further, he educates the reader on the interesting connecting between the demon king, Zen and the Shaolin monks! And not to forget his vivid and beautiful descriptions of the desert landscape and the Indian life. In his maiden book, Jered thus blends beautifully several travel anecdotes, historical findings, cultural insights and human connections. The book is not just about finding an instrument but following the music of one’s heart.

The author is a psychologist by training, a journalist by profession, and an Indologist in the making
Get Swarajya in your inbox everyday. Subscribe here.
Tags: