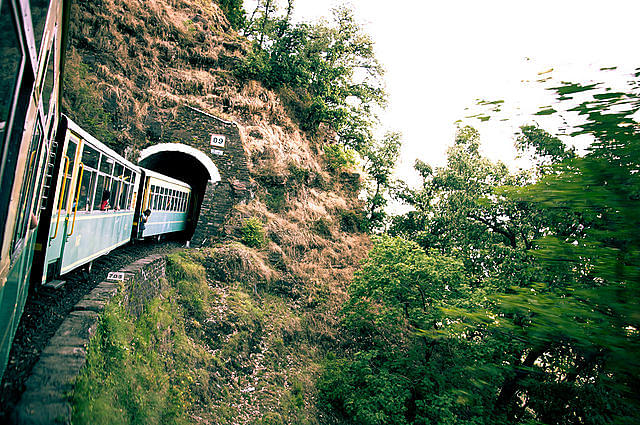 Building a railway network  on the northern and eastern borders

It is characteristic of rail budget speeches to underscore the need to ensure rail connectivity to the Indian Himalayan borders. Nonetheless, superfluity of plans notwithstanding, ground work remains patchy. While India is engaged in ritualistic statements, China introduced and expanded the reach of high speed trains; Tibet came on rail map and is a matter of time before their railways touches Indian borders. We pale in comparison. Most of our trains still hover around at speeds of around 50 kmph.

Strategically, given Chinese railway expansion in Tibet, it is imperative to counteract the same with railway lines in regions like Ladakh, Himachal Pradesh (HP), Uttarakhand and North Eastern States. Yet, given the current rhythm, it may be decades before these locations glimpse a locomotive rolling out in their midst. As we seek to integrate the railway system with the Himalayan geography, it raises numerous questions.

The Himalayan landscape offers challenge to current BG based rail network. Unlike Tibet which is high plateau, the terrain on the Indian side of Himalayas is uneven with number of curves and bends making comparisons inappropriate. Further, the region is ecologically susceptible. Given our engineering expertise still unable to crack Pir Panjal terrain to link Katra with Banihal, it signals a sense of enormity involved in creation of railway lines linking Ladakh, hills of Himachal, or tourist spots of Uttarakhand or the hinterland of Arunachal Pradesh.  Experience does not exclude the odds of railways being limited to few symbolic towns in these regions. Regardless of these challenges, the contemporary Indian railway judgment is entrenched in the mindset of Project Unigauge. While that made sound logic in large parts of the country, it cannot develop into a dogma.

Strategic reflections dictate the early introduction of railway systems along the Chinese border. Existing railway conviction point to BG based railway network. Geography encumbers soft steering of BG in the quickest possible time. Therefore reconciliation amongst these aspects has to come about. Given the overriding nature of strategic role the railways will play in these regions and the need to do so speedily, it might be sound judgment for adopting narrower gauges of railway like meter gauge in these areas.

Apart from perhaps HP and parts of J&K where orchard economy potentially offers outbound traffic, freight traffic in all probability, is significantly inbound. Road transportation faces uncertainties and high costs on account of bad road conditions, recurrent landslides, snowbound during winters, ban on night traffic owing to safety concerns, add lot of pressure on the existing road freight traffic.  Introduction of railways and implementation of models like Ro-Ro currently operating on Konkan Railway might alleviate demands on the roads while shifting traffic to more prolific railway network. All weather railway tracks promote round the year inflow of goods into these states, above all in the interior.  An outcome could be better integration linking the producers, consumers and the market.

The raison d’être of rail connectivity is facilitating brisk military movement during crisis. In normal times it guarantees military supplies are moved fast and make sure noticeable fall in travel times for military personnel from the plains to hills. Further, with respect to movement of military equipment, it is exceedingly improbable given the terrain; the military will go for tank warfare or other heavy equipment. Therefore most material can be moved successfully through smaller rail lengths also. Further all weather railroads assist easier collaboration and harmonization between command centres and the troops on the border.

Unigauge intended to overcome transshipment issues, freight in particular while shifting from one gauge to another. Beyond doubt, seamless operations help avoid escalation of costs and time. Yet, diffusion into hitherto unreached countryside demands detaching some rudiments that drove thinking in the plains and plateau. Given the prevalence of tourist traffic, it is unlikely there will be too many travelers travelling to their end destinations without break. A tourist visiting Char Dham in Uttarakhand is highly unlikely to directly travel without visiting Haridwar or Rishikesh on the way. Instead of rail to road shift at Rishikesh, it will be shift from one railway system to another

Manufacturing rolling stock for different types of rail lengths present certain difficulties. Yet it would not be farfetched to call it self inflicted. Locomotive factories at Chittranajan, Varanasi or coach factories at Kapurthala, Perambur or new ones at Rae Bareilly are simply not driven by demand side pressures. Instead they build onto the supply side constraints. The very reality that they function as a unit within Indian railways and not a separate corporate entity add to the despair. The private sector by and large remains out of purview. The stance has to change. The production has to be demand driven. Private sector participation potentially stimulates the production as also maintenance of the rolling stock. Track infrastructure too calls for a shift from limitations in supply to driven by reaction to change in demand. Moreover, many metro rail systems operate on globally adopted standard gauge to suit the requirements of the neighborhood metropolitan topography. There is no reason why it cannot be replicated in the hills.

Perception has it that broad gauge means faster travel. Undeniably there is a point.  Meter gauge or narrow gauge route time tables show average speeds of 20 kmph in some sections and around 30-35 kmph in various sections. In contrast, broad gauge trains operate at average speeds of around 50 kmph. Ostensibly, the hitch is lack of investment in maintenance and improvements to track infrastructure and not rail length. The 50 odd kilometer BG ghat section of Hassan Mangalore railway line is traversed by a passenger train in about two and half hours. Replicating in the Himalayan regions imply similar or even lower speeds.  Current technology globally and involvement of private sector in infrastructure development can make possible decent speeds in these regions even with adoption of narrower gauge. Modest average speeds of even 45-50 kmph may psychologically bridge the distance gap between hilly interiors and the plains.

To a good extent, terrain and not land acquisition act as bigger constraint. Narrower width of railways might ensure railways reach areas currently reckoned inaccessible. In HP, why stop at Manali-Leh line and why not a progress towards bringing railways to inner reaches of districts like Lahul and Spiti, Mandi, Kinnaur etc. In Ladakh, a railway line to Siachen base camp or onto the Ladakh-Tibet border can work wonders. Reaching Badrinath or Kedarnath or even further to Indo Tibet boder can be thought of.  Similarly in Arunachal Pradesh, Sikkim or Meghalaya too, the reach can be quite deep not only facilitating faster passenger, freight and military movement but generating larger quantum of spillovers.

Mission Himalayan Railways will be a product of resolution of the dilemma between the connectivity to borders, choice of gauge, and environmental impact. Since less space is required for meter/narrow gauges, the resultant environment impact will also be less. High gradient curves and bends makes the current BG based system challenging. Konkan railway passed through lot of tunnels but high gradients were absent.  Construction was child’s play compared to task confronting the rail builders of Himalayas. Therefore alternative thinking is critical. Building connectivity in shortest possible time thereby necessitates thinking narrow or meter gauge in these regions. A way forward could be formation of corporation on lines of Konkan Railway Corporation Limited to construct and maintain the railway lines. The proposed corporation could control railway lines in the region and may even be divided into special zones a la railway zones in the rest of India. It might be entrusted with construction of railway lines, rail operations and even have own workshops etc.

If rail connectivity were not to remain a mirage, a distinct possibility given historical precedent, current expertise do not allow luxury of experimenting with conformist opinion.