A Member Of A Vatican Body Was Nalanda’s Chancellor, Its ‘Mentor’ For Many Years, And Was Given Padma Bhushan By UPA—Meet George Yeo 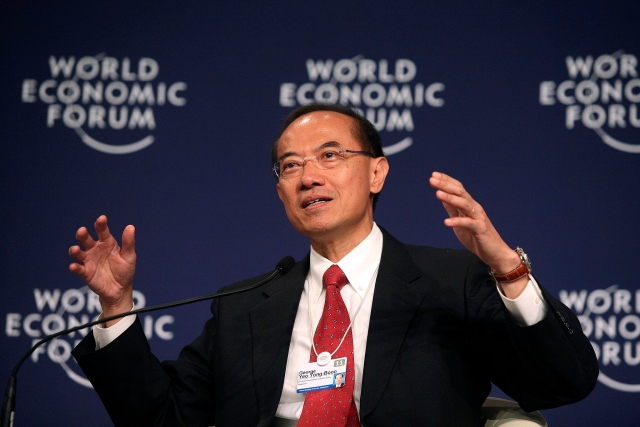 God’s Bankers is an extraordinary book that came out in 2015.

Written by attorney-turned-author Gerald Posner, it is an exhaustive yet interesting account of the way the Vatican runs its finances.

This article is not a review of that book. But Hindus who are struggling to get control of their assets shall do well reading it.

The way the Catholic Church manages its own wealth, much of it created through colonialism, will alert Hindus to what they are up against. It will also serve as another reminder for why recovering temple wealth and resources and using them for a Dharmic renaissance is a must and an urgent task.

After 42 chapters, 502 pages and at least two hundred years of manipulations, strategies and scandals, the reader comes to chapter 43 of the book, where Posner speaks of the 'newfound enthusiasm’ of Pope Francis, ‘in tackling reform at the IOR.' ‘IOR’ stands for 'the Institute for the Works of Religion' or simply, the Vatican Bank.

So, in the summer of 2011, the Pope summoned six top Catholic financiers from around the globe, to Rome.

The names of these financiers are given in the endnotes to the chapters. If one takes the trouble of getting to the endnote 14 of chapter 43, one finds the name of George Yeo, Singapore’s former Foreign Minister, to be one among the six.

In 2012, the Sonia Gandhi-Manmohan Singh-led United Progressive Alliance (UPA) government awarded George Yeo the Padma Bhushan. Contemporary press reports spoke of how he was ‘helping set up an international university in Bihar's Nalanda.'

It was Dr Abdul Kalam who had pushed the idea of reviving the Nalanda University. In 2007, when the panel for the institution was formed, it had Amartya Sen as the leader of the panel.

George Yeo was a part of the group as a ‘mentor’.

By 2010, after three years and five meetings, of which three were held in Singapore, Tokyo and New York and a bill of Rs 1.71 crore, the due report of the panel was nowhere near submission. ('Mentor group sits on Nalanda varsity plan', 'India Today', 16 July 2010)

In 2016, when the Union government did not proffer a second term to Amartya Sen as the head of the Nalanda University panel, Professor Sen wrote a letter to all the members of the body and announced that he was quitting.

The panel members promptly elected George Yeo as the head. When the Government of India reconstituted the panel, Yeo resigned accusing the government of interference.

Singapore had already had its encounters with typical manipulations of the Church in the post-colonial world. In 1987, Singapore authorities arrested 22 Roman Catholic activists whom the government accused of being involved in a conspiracy to overthrow the government.

This was a typical Catholic Church manoeuvre, as seen in post-colonial countries.

At the beginning of the Cold War, the Popes were anti-Soviet. But with respect to Israel, they were on the opposite side of the U.S.

Pope John Paul II had closely cooperated with the U.S. in liberating Poland from Marxist clutches. But the social problems in the Catholic-dominated South America gave the Vatican a clear understanding of how to use Marxism as an effective weapon in the third world countries and post-colonial world.

The strategy was to use the social issues of the developing countries to foment trouble such that the Church could ultimately emerge as a chief moderator or negotiator. So ‘Liberation Theology’ was a heady mixture of Marxist theory and Catholic theology.

Clearly, the Singapore attempt was a miscalculation of the strength of Prime Minister Lee Kuan Yew.

A year after the arrests, George Yeo was cautiously ambiguous in public statements regarding them.

As an aspiring politician who could move into an influential position of power, he might not have wanted to jeopardise his chances. So, he stated that although the arrest was clearly not a case of the government taking on the Church, which he stated was, also a fact recognised by the Vatican itself, 'many people in the church he attended' perceived it as the Singapore government taking on the Church. ('George Yeo on Bonsai, Banyan and The Tao', World Scientific, 2015, p.646)

If that was how he felt about the arrest of Catholic activists then, he is even more explicit about his loyalties now.

In 2018, Cardinal Pell became the highest Vatican authority to be convicted of child sexual abuse. Though Pell was acquitted one and a half years later, the royal commission findings clearly indicate that he knew about the child sex abuse going on in the Catholic Church almost a decade before police started its investigation.

In 2018, following the conviction, George Yeo shocked many by stating that he was praying for the acquittal of the Cardinal.

He revealed that in February 2014, he had become a member of the Vatican Council for the Economy which meets four-five times year. Cardinal Pell was the Secretary for the Economy.

In 2016, George Yeo resigned from the Nalanda University panel when the government reconstituted it. He said he was not informed.

The new head of Nalanda University panel is Dr Vijay Bhatkar – a computer scientist and one the chief architects of the PARAM super computer. An institution builder, he, in 1988, as the first director of C-DAC, made the prototype for the supercomputer that was denied to India and within two years, by 1991, PARAM 8000, became a reality.

Yet, when he was made the Chancellor, he was questioned by a section of the media regarding his association with Vigyan Bharathi (VIBHA), the science movement associated with the Rashtriya Swayamsevak Sangh (RSS).

The Hindu ran a ‘report’ titled ‘'Vijay Bhatkar to remain in RSS body'.

The earlier report filed by Nistula Hebbar in the same newspaper had been factual. But this one was biased and disrespectful.

He was introduced to the readers as ‘a computer scientist’. And then the report went on to do a hatchet job on VIBHA. The report ended with this sentence:

In the past, the Nalanda University’s eminent heads, Singapore’s former Foreign Minister George Yeo and Nobel Laureate, Amartya Sen, stepped down after complaining of government interference.

That this piece published as a news report is written by Jacob Koshy should be read only as a coincidence.

But the important point is this.

No journalist in India asked George Yeo about his associations with Catholic organisations.

To repeat, Yeo is a Catholic global financier. He was also holding a powerful office in a financial body of the Vatican. Such a person being the Chancellor, or even a ‘mentor’, for a Buddhist-Hindu University in India smacks of conflict of interest.

Given these facts, another explanation of Yeo’s appointment at Nalanda would have to include Sonia Gandhi’s alleged and notorious aversion for all things Hindu.

Yet, it would be Dr Bhatkar who would be ridiculed for his association with an organisation that shares its core values with the original Nalanda, while Yeo’s Padma Bhushan would be celebrated and justified.