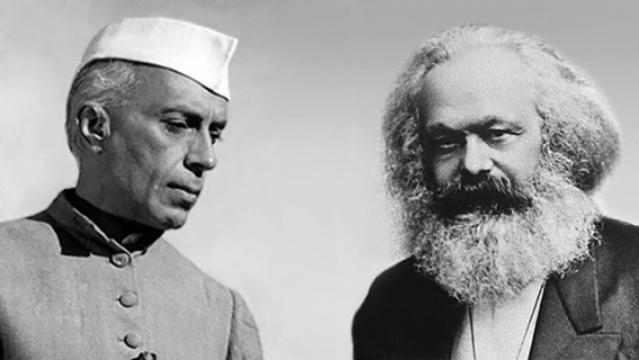 One of the biggest turning points in modern Indian history was the close ideological alignment of the Nehruvians and the Marxists. Former prime minister Jawaharlal Nehru was concerned about what form the Indian state would take post-independence. For the Indian state to have longevity and legitimacy, it had to be closely aligned with the historical ideals of the Indian nation. Therefore, not only the knowledge but also the understanding of Indian history was essential. Nehru did find his understanding of Indian history in the theory of Marxism, and he wrote about it in a breathless tone,

The theory and philosophy of Marxism lightened up many a dark corner of my mind. History came to have a new meaning for me. The Marxist interpretation (of history) threw a flood of light on it, and it became an unfolding drama with some order and purpose, however unconscious, behind it….The great world crisis and slump seemed to justify the Marxist analysis. While other systems and theories were groping in the dark, Marxism alone explained it more or less satisfactorily and offered a real solution. As this conviction grew upon me, I was filled with new excitement…Was not the world marching towards the desired consummation?

What is the Marxist interpretation of history and the desired consummation that Nehru got so excited about? He himself provides a part of the answer. “If there is one thing that history shows it is this: that economic interests shape the political views of groups and classes. Neither reason nor moral considerations override those interests.”

Nehru is basically rephrasing the doctrine of dialectical materialism of Marx, which states that “all history was the history of class struggles...the history of all past society has consisted in the development of class antagonisms…these warring classes of society are always the products of the conditions of production and exchange, in a word, of the economic condition of the time.” The desired consummation is the collapse of the capitalist society, the revolution of the proletariat, the counter-revolution of the bourgeoisie and the final end in the establishment of the perfectly equal and classless society. Nehru subscribed to the Marxist ideology, but not to its violent political methods.

Notice that this theory is exclusively based on perpetual conflict, hostility, and hatred between the classes. It reduces the entire working of history to just the economic cause. In this worldview, religion, philosophy and ethics have no place in the evolution of society – everything is basically an effect of an economic cause.

The contours of the new Indian state were becoming clear to Nehru. If the history of India was an arena of class wars, then the central aim of the state was social justice. To provide social justice, the state must appropriate the means of production, reorganise the system of economic production, and redistribute the wealth. Therefore, the central aim of the Indian state is socialism. The final of the triumvirate is secularism, which the state, though religion-neutral, would take special measures to provide specific safeguards to ‘minorities’.

In this socialist scheme of things, Nehru was against making the “right to property” a fundamental right of the Indian citizen. It meant that the state would have unlimited power to appropriate the private property of citizens without fair compensation. Nehru acquiesced only when John Mathai, the then finance minister, threatened to resign if this fundamental pact was not added to the Constitution.

To give legitimacy to this materialistic conception of India’s past, the Nehruvians appropriated three personages from Indian history – Buddha, Ashoka, and Akbar. In probably the greatest intellectual chicanery of modern times, Buddha was made some sort of class warrior and a champion of the social justice cause. There is nothing, absolutely nothing, in his life as chronicled in the Pali Canon from which we can draw the conclusion that Buddha was a social reformer in the modern sense of the term. He upheld the Varna system with the slight modification that now Kshatriyas were at the top of the Varna hierarchy.

Ashoka was the symbol of socialism in ancient India. The Lion Capital of Ashoka is the official emblem of India. As the Arthashastra tells us, the Mauryan empire ran a highly centralised state that controlled the people, production and economic resources under its domain, something aligned to the economic policies of the Nehruvian state. Moreover, Nehru wanted to establish a nation based on ahimsa in his famous phrase, “Scrap the army, police is enough.” Who better than an Indian king eschewing violence and adopting Buddhism. It was a match made in heaven!

Akbar was the great torchbearer of Indian secularism. He was an antidote to the destructive legacy of the Turkish, Afghan and Mongol invasions of India. Akbar was used by the Indian state to whitewash the toxic legacy of hundreds of years of “jizya” tax, the institutionalisation of slavery, the wanton destruction of temples and ancient universities. This was a way for the Nehruvians to buttress that religious tolerance was not only the legacy of Indic faiths, but even of Islamic rulers.

Marxism and Nehruvianism in action

With the ideological underpinnings of the new state ready, Nehru unleashed the full might of the Indian state to achieve the objective of socialism, social justice, and secularism. Nehru was “eager and anxious to change her (India) outlook and appearance and give her the garb of modernity.” Hinduism with its Varna system, elaborate rituals and its philosophical speculation on the nature of reality, was the biggest hindrance to this objective. The idea of building the modern state based on Indian civilisational heritage and from the wisdom of her ancestors was dismissed as the fancy of upper-class Hindus. The scholars described such phenomenon as “product of intellectuals from backward societies…retreating into history to claim descent from a once great civilization.”

Therefore, to create this radically new society, built on the corpse of a four-thousand-year-old civilisation, a new generation of Indians had to be trained to imbibe this ‘materialistic spirit’ of the age, often called the ‘scientific spirit’. One of the remarkable features of a modern state is not only the monopoly over violence but also monopoly over education. The Marxists, with the help of Nehruvians, would control and dominate every social science and cultural institute of importance, and indoctrinate the next generation of Indians to this materialistic conception of India’s past. It was no coincidence that a card-carrying Islamist, Maulana Abdul Kalam Azad, and a card-carrying Marxist, Saiyid Nurul Hasan, were made the education minister during the reign of Nehru and Indra Gandhi respectively.

In this remaking of India, the political and legislative work would be done by the Nehruvians, while the ideological work was outsourced to the Marxists. The idea was to create citizens who are cut off from their civilisational roots, a cultural automaton who could be retrained in the ‘scientific spirit’ of the age. This sense of rootlessness, often called anomic cosmopolitanism, a condition in which society cannot provide moral guidance to the individual, was a fertile ground on which the seeds of Marxist thought could be planted.

Steadily, the pillars of Indian civilisation were being knocked out and this is what happens when Marxist theory is applied to the Indian context – the whole history of India becomes an arena of class and caste struggle. Buddha appeared in Indian social life to preach equality of different classes, the entire devotional outpouring of Bhakti movement in vernacular literature was a revolt of lower classes against the Sanskritised upper class. The elaborate rituals of Hinduism are a Brahminical ploy to dominate the lower classes. The Islamic invasion of India led to the ‘liberation’ of lower classes from caste hierarchy. In fact, the entire tradition of Hinduism is nothing but difference of caste.

The nationalist fight back that never happened

What was the nationalist reaction to this reductionist conception of India? Why did they let Nehru get away with the cultural effacement of Indian society? Historically, the Congress party had a very strong nationalist faction led by Sardar Patel, Rajendra Prasad, Syama Prasad Mukherjee, Purushottam Das Tandon, and K M Munshi. They kept a check on both Nehru’s political power and his intellectual flights. But after the death of Patel in 1949, Nehru eventually cut all of them to size. Such was the bitterness of Nehru towards the nationalist faction of congress that he even barred Congress ministers and secretaries from attending Patel’s funeral.

He was vehemently against Rajendra Prasad becoming the president of India, and when Prasad did become the president, due to an overwhelming majority of Congressmen voting in his favour, Nehru did everything to stomp his authority. From appointing an army general without his consent to disregarding any presidential advice on important matters such as Hindu Civil Code, the Tibet issue, the Zamindari Act. Prasad wanted to write a book on his presidential years called “The Years of Agony”. The only reason he allowed Nehru to have his way was, in his words, “I do not want to create a crisis in the early years of the Republic.”

Syama Prasad Mukherjee’s ideological differences with Nehru were too vast for them to work together. He resigned from the Congress party in 1950 and founded the Bharatiya Jana Sangh in 1951. In 1953, he died under mysterious circumstances in a custodial jail in Kashmir. Purushottam Das Tandon was elected as the president of the Congress party, but had to resign due to vehement opposition by Nehru. Nehru replaced him as the president of Congress in 1951, further cementing his hold over the party organisation. Meanwhile, K M Munshi was sidelined from the Congress. He, along with Rajagopalachari, eventually founded the Swatantra Party – a nationalist, pro-free-market political party. This was his assessment of Nehru:

Jawaharlal Nehru was a dictator by temperament but had an intellectual aversion to dictators….He swore by the constitution but was ever ready to defy or ignore it. Entrenched as he was in unlimited power, he could never realize the harm that he was doing to the country by twisting constitution to his liking…Other leaders had to submit to his wishes because sweeping electoral victories could not be won by his support. Built up as an heir to Gandhiji, and spoiled by interested international adulation, he was intolerant of criticism and impatient of opposition.

So, after a few years of independence, the whole nationalist faction of the Congress party was neutralised. Nehru became the sole ‘bhagya vidhata’ of the country. In the annals of modern Indian state, this was the most ruthless display of political power, topped only by his daughter.

In Part III, we trace the ‘idea of India’ from the most authentic sources of Indian history.

P S: In this historical evaluation of Nehru, we have relied on Nehru’s actions rather than his grossly verbose books. In his writings, we neither find the moral conviction of Gandhi, the erudition of Ambedkar or the logic of Bankim Chandra. While reading Nehru’s work, one common theme is the inherent contradiction in his positions. For example, he wrote about the “unity of India”, “five thousand years of civilisation”, Sanskrit as India’s “finest heritage”, but then talked about a radically modern India based on socialism. Therefore, rather than judging the man by his written word, we have judged him by his actions.

Also Read: Indian Nationalism: The Memories Of History – Part I