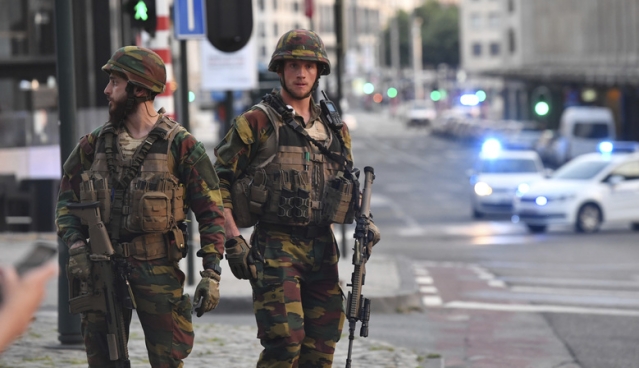 Belgian Army soldiers approach a man outside Central Station after an explosion.

Belgian soldiers shot a terror suspect after an explosion rocked the central train station in Brussels, the capital of Belgium, at 8:30 pm local time on Tuesday, in the latest attack to hit Europe. No civilians were killed or injured in the attack.

Witnesses said the suspect shouted "Allahu Akbar" before setting off the blast. Initial reports suggested that the explosion came from an explosive vest.

Nicolas Van Herreweghen, who works for Belgium’s national rail company, confirmed that the male suspect was very agitated and yelled “Allahu akbar” before blowing up. The man appeared to be 30 to 35 years of age, he added.

"There was an accident at Central Station. There was an explosion around a person. That person was neutralised by the soldiers that were on the scene,” the police spokesman said, adding that the incident is being treated as a terror attack.

The station is one of the busiest in the country. Although the incident happened well after rush hour, hundreds of passengers were still inside the station.

The blast in Belgium comes a day after a radical Islamist on a terror watch-list rammed a car laden with weapons into a police vehicle in Paris.

Brussels has been on high alert for 18 months since Islamic State militants based in the city carried out attacks in Paris that killed 130 people there in November 2015 and later bombed Brussels airport and the city's metro in March last year.