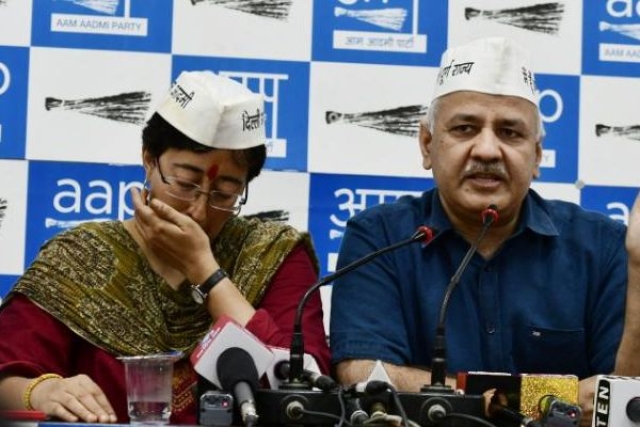 Almost all popular women leaders of India have at some point in time faced harassment of the sort AAP alleges Atishi Marlena is being subjected to.

All of them invoked sympathy in the electorate but none of them made the assumption that sympathy naturally translates into political support.

On 9 May, Aam Aadmi Party (AAP) levelled accusations against Bharatiya Janata Party (BJP) candidate Gautam Gambhir that he circulated an abusive pamphlet against its candidate from Delhi (East) Atishi Marlena.

The pamphlet, beyond doubt, is outrageous and no matter who wrote it, whether Gambhir, AAP itself, or any private citizen, shows the immoral and disgusting side of our political culture.

Gautam Gambhir’s response has been swift and unequivocal. He said that if AAP could prove that the pamphlet was written by him, he would quit politics. He further challenged Arvind Kejriwal that if unable to prove so, Kejriwal should quit politics. AAP hasn’t yet responded to his challenge. Gambhir also filed a defamation case over the matter. Later AAP also sent a legal notice to BJP and Gambhir, asking for apology and threatening “legal proceedings”.

As soon as it was released, Twitterati were quick to point out several red flags with the pamphlet, a major one being how such a document being distributed to public remained outside the reach of social media. Keeping in mind the pamphlet’s target audience, it is unusual that it is written in English with some words which are rarely used in common parlance: compelling circumstances, flared up, blob on society.

The style and language also seem forced. Consider this statement: He is a handsome man..but a... can’t be handsome. People aware of how casteist, sexist politics operates on ground would know that the target audience of this letter would not care about ‘handsomeness’. A ground report by India Today, covering 50 different people in 3 random areas found that not a single resident had received the pamphlet.

It must be clarified at this point that no assumptions should be made of guilt. It may very well be that Marlena is a victim of a slanderous campaign by Gambhir or even her own party. During the press conference, she was visibly upset. She broke into tears mid-speech, with Sisodia consoling her.

If AAP’s allegations are true, this wouldn’t be the first time that a woman politician is subjected to such harassment. Almost all powerful women leaders of our times have suffered from fellow politicians trying to outrage their modesty. Sonia Gandhi, Mayawati, Jayalalithaa, Mamata Banerjea, Smriti Irani all had to face such incidents. However, their response was different from Marlena’s.

India was surprised when a woman referred as ‘goongi gudiya’ successfully led the country in the 1971 war and imposed Emergency. Recently, after a Congress ally said that Smriti Irani’s bindi gets bigger as she changes husbands, Irani retorted back, “The more you will insult me, the more you will attack me, the harder I will work against Congress in Amethi”.

Jayalalithaa and Mamata Banerjee are both known for their authoritarian style of functioning and aggressive speeches. And those like Sonia Gandhi and Mayawati remarkably overcame any lack of natural leadership skills (both only read written speeches in public addresses) with strong command of their parties. In fact, a deliberate attempt is seen on the part of these politicians to undermine the instances where they were victimised as a woman. Mayawati recently forged an alliance with Akhilesh Yadav, forgetting the 1995 guest-house horror when Samajwadi Party workers assaulted her and she had to be rescued by a BJP politician, Brahm Dutt Dwivedi.

Anna A Suvorova, in her book, Widows and Daughters: Gender, Kinship, and Power in South Asia, investigates how male dominated societies of South Asian countries chose to be led by several women leaders, and even imbued them with charisma. While many inherited a role their father or husband played, they quickly developed a following of their own. The loss of husband or father earned them public sympathy at the start, but the transformation of that sympathy into political success wasn’t automatic.

Suvorova's diagnosis is that since the male majority assumed women to be “inherently apolitical, passive, easily swayed, eager for compromise, incompetent, subject to the influence of their male entourage, and in a word, marionettes controlled by puppeteers present among advisers in the party hierarchy or cabinet,” women politicians had to act tough to defy such notions. They had to be the ‘man in the situation’.

Another reason for female politicians donning a strong face might be the simple supply-demand logic. Indians are not threatened by, and instead admire a strong female figure, due to cultural prevalence of Devi-worship, particularly in warrior-forms like Kali. Many women leaders of our times are often praised in popular media by likening them to the goddesses, viz. Congress posters with “Maa Durga’s Avtaar Priyanka Gandhi”, Karan Thapar calling Indira Gandhi “Durga with delicate hands”. Many like Jayalalithaa achieved a cult like status with ministers publicly prostrating before them.

In contrast to Western countries, where female politicians are incentivised to look more ‘feminine’- beautiful, sweet, calm, devoted to kids and family, Indians don’t seem to enforce Victorian standards of femininity on their women leaders. Sonia Gandhi, Menaka Gandhi both are widows, Mayawati and Mamata chose to stay unmarried and childless, and so did Jayalalithaa. Several women from entertainment industry have also been successful politicians. Leaving behind their image of “dream-girl”, “the most beautiful face on the Indian screen", “TV’s favourite bahu”, these women sparked strength and vigour in politics.

To sum up, Indian electorate doesn’t have a lot of time for the kind of sympathy AAP presumably hopes its candidate from Delhi (East) would get. The entire pamphlet controversy may win Marlena sympathy on social media, but it will be hard to convert into political capital.