The Women Behind The Tiranga: Inside India’s Only National Flag Manufacturing Unit 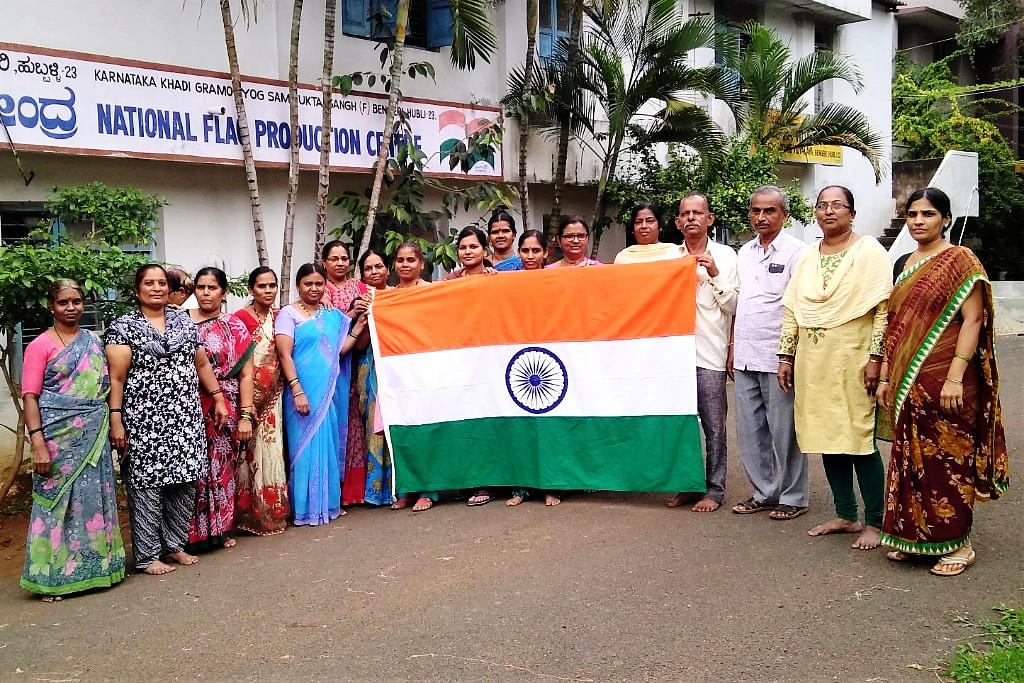 Annapoorna Kote’s eyes glisten as she says, “We may never leave this town, but our Tricolour is fluttering high around the world.”

Kote is supervisor at the all-women’s unit at the Karnataka Khadi Gramodyoga Samyukta Sangha (KKGSS) in Hubli, which is India’s only official flag making unit. This bunch of rural women are the ones who painstakingly turn yards of kora (plain) cloth into the Indian National flag.

The KKGSS is the only unit that manufactures the Tricolour as prescribed and sanctioned by the Bureau of Indian Standards (BIS). It is entirely handwoven and every thread hand-spun.

Be it in the tiny government school in a village, in the hinterlands, or at embassies across the world, or the tiny flag that flutters on government vehicles to the flag that embraces the bodies of our slain soldiers - the Tricolour is made here.

Theirs is the job of creating with utmost care and undivided attention the Tricolour. It is no easy task. From the smallest defect in the flag, to the fastness of its colour, the strength of yarn or to the thread count, all amount to a serious punishable offence. Any error in its creation is liable for a fine or imprisonment or both as per the provisions of the Flag Code of India 2002.

“Which is why it is an all-women team, as the eye for detail and patience and dedication that is needed is not what many men can boast of,” adds Kote, who has been at the flag-making unit since it began in 2005. “There were men who joined, but then, at times, the entire stitching has to be undone. Since the thread used is thicker than the ones used normally, every single stitch has to be undone one stitch at a time. You cannot rip it apart,” she explains during our tour of KKGSS Bangera in Hubballi.

The women at the unit spend over seven hours each day cutting, screen printing, curing, stitching and toggling the Tiranga.

The Birth Of A Flag: Stages Of Production

The fabric for the cloth is manufactured as per BIS specifications at the unit in Bagalkot. The cotton is hand-spun and later woven into two different types of cloth - the bunting cloth used to make the three panels and the duck cloth used for the sleeve attachment. These two sets of fabric reach Hubballi and undergo the following stages where it transforms into the flag.

Bleaching and Dyeing: The bunting cloth undergoes dying for the two colours and bleaching for white. This is the only process that involves heavy machinery.

Printing the chakra: Every chakra is screen printed manually. Chakras of specific sizes have to be printed on respective panels of white. While the most sold one, the 2X3, takes just two women for the task, the largest one takes eight women to print one chakra onto one strip of white. The women jointly place the strip of white between the frames of the screen, taking care not to soil the rest of the portion with the ink. Then, they run the ink spreader on it, turn it over, repeat the process, open the frame, take the white strip off the frame and clip it onto a string to dry.

The largest frame, which is used for the 14-by-21 flag, is a mammoth one and printing one chakra takes eight women to lift the frame and turn it around. “It is no mean feat, since lifting the wet frame and turning it around needs not just strength, but also utmost care to not just ensure the chakra is printed, but also that the rest of the fabric isn’t soiled,” she says.

Curing: The chakra printed panels are stacked and processed through the curing machines.

Stitching: A special thread which meets the BIS specifications with the colour matching those of the panels is used to stitch the panels together and a sleeve that holds the three together.

Toggling: The cord that will run through the sleeve is spliced and a toggle attached to it which is then positioned at the top corner of the saffron panel. Once toggled, the sleeve is stitched again so that rope that has been inserted doesn’t move. Extra threads, if any, are trimmed.

Ironing and Folding: Two women then sort each flag, steam iron it stiff, and fold it. The folding, too, has to follow a pattern that ensures the green panel stays on top so that the white panel isn’t soiled and the saffron one doesn’t fade due to exposure.

Packing: The folded flags are stacked in top bundles, tied by ropes and moved to the godown, from where they are then dispatched as ordered.

One cycle of production takes around 15 days. It’s no simple task, yet, some of the women who have worked here have been at the centre since the flag-making began. The supervisor, Kote, ensures the flag is perfect.

Secretary of KKGSS, Shivananda Mathapati, heads the women's team. He has spent three decades in the process of flag-making. Having started as a spinning instructor in Bagalkot, he has spent three decades supervising every aspect of the process. Remembering the man behind it all, Venkatesh Magadi, he says, “It was he who envisioned this here. He gave his own land to set up the Khadi centre, and until his death, strived to do all he could for Khadi.” The bust of Magadi and his wife greets visitors at the unit office. The godown stores the flags, Khadi fabric and garments that are distributed to the Khadi Bhavans across the country. “It is the largest storehouse of Khadi,” he explains.

The flag that sees the highest sales is the 3ftX2ft while the least number of pieces produced are of the 21ftX14ft. There are very few pieces of the largest size produced, which are flown to just three locations in the country - Naragunda fort in Gadag, Gwalior fort, and at Raigad fort. The unit sees an annual sale of flags totalling over Rs 2 crore (annual sale for 2017-2018 was Rs 2,17,07,235). The last financial year saw a sale of 26,334 flags of various sizes. While only 30-50 pieces of the largest flag are produced annually, the 3ftX2ft which costs Rs 715 per flag, accounts for 60 per cent of the total sales. The price of the largest flag is Rs 17,800. The car flag costs the least at Rs 170.

Silently, on their laps, rests the Tricolour, as the women go about their work, from 10 am to 6 pm, each day. The women get paid per piece, while toggling commands Rs 12 a piece, and women who stitch get paid according to the size of the flag, from Rs 9 for the small table flags to Rs 300 for the largest one.

At the unit, every person involved in the making of the Tiranga flashes a smile. And with every smile, clearly, pride is writ large.