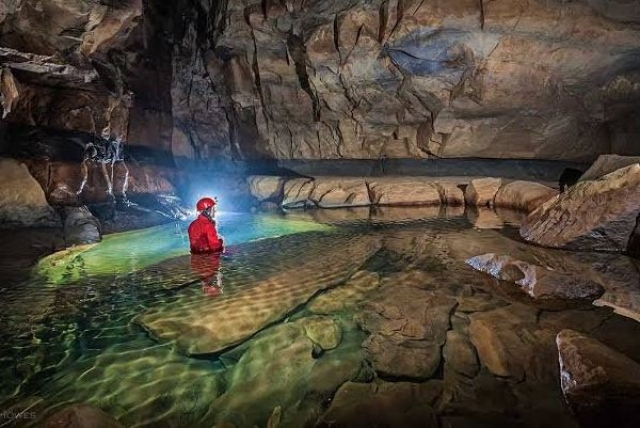 In a 2019 expedition in north east India, biologist Daniel Harries stumbled across a cave fish nearly a foot and half in length and weighing about 10 times more than any known species of the subterranean fish.

The fish, described recently in the journal Cave and Karst Science, is purportedly the largest of its kind in the world, says Douglas Main in a National Geographic article.

In Meghalaya’s Um Ladaw Cave, around 300 feet below the surface, Harris and others found dozens of the large creatures swimming in the water. The expedition was led by Thomas Arbenz, a professional fish explorer.

Meghalaya, one of the rainiest places on the planet, has a lot of caves carved out of karst and limestone by the rain.

What are subterranean fish?

It is a general term used for the water fish adapted to life in caves and other underground habitats.

These fishes have adapted themselves for the extreme conditions found in such environment, like constant darkness, less quantity of food etc.

Some species of the cave fish have changed their circadian rhythm from a 24-hour biological clock to a 30 or 40-hour one to save energy. Some develop larger fins for more energy-efficient swimming.

Many times, there is a loss of scales and swim bladder and pigmentation.

The greatest of these adaptations is the loss of the eyes, which are useless given the constant darkness. Eyes become a disadvantage because of their energy requirements, and therefore, are typically reduced in cavefish.

However, their other senses may be enhanced, including those for sensing vibrations, mouth suction to sense nearby obstacles, and detecting chemicals.

The very limited food availability puts a size-limitation on the cavefish and most species are between 2 and 13 cm length, with some reaching close to 20 cm. Cavefish in general are opportunistic feeders, taking whatever is available

What makes this discovery important?

Before this discovery, the two longest known subterranean fish species are the blind swamp eel from Yucatan in Mexico, and the blind cave eel from western Australia. Both of these have significantly thinner bodies than the new found cavefish.

The new found fish also has significantly higher weight than that of an average cavefish. Harris speculates that the new fish likely feeds on vegetation washed underground by rain.

However, their size and diet remain a mystery. “There’s certainly something rather odd going on to have quite so many large fish in that kind of environment,” says Harris.

“It’s very interesting that... this cave could support not only a fish with a considerably large body size, but also a relatively large population,” Patricia Ornelas, a researcher with National Autonomous University of Mexico.

The discovered fish looks similar to the surface fish, golden mahseers, an endangered species that can grow to many feet in length. However, it lacks pigmentation, with a white, almost translucent colour. It is eyeless, though it apparently has some ability to sense light.

While the researchers are hoping for it to be classified as a new species different form the Golden Mahseer, its identity is not yet biologically determined.

Further research might reveal how the fish maintains its size, what they feed on, and how they’ve adapted to live in these extensive and deep caves, many of which remain unexplored.