Be Wary Of Assumptions In Bihar 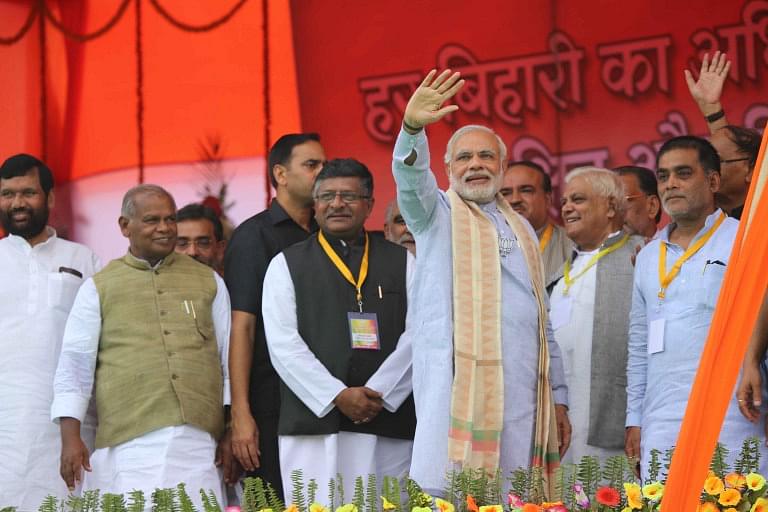 Both the NDA and the Mahagathbandhan need to steer clear of simplistic electoral assumptions in Bihar.

After the BJP got a historic mandate in the May 2014 Lok Sabha (LS) elections and Modi emerged a national hero for governance and development, assembly elections were held in Haryana and Maharashtra in October, Jharkhand and J&K in November-December 2014 and Delhi in February 2015.

Except for Delhi, the BJP, alone or with allies, formed the government in all the states. But the Delhi debacle was so devastating that the party was virtually wiped out, getting just three seats out of 70 against Arvind Kejriwal’s AAP which got the remaining 67.

That virtually neutralised BJP’s earlier electoral achievements in four states especially as Narendra Modi himself had vigorously campaigned for his party in Delhi. The question now is: Will Delhi be repeated in Bihar or will BJP storm Bihar replicating its Lok Sabha performance of last year?

This question is not easy to answer. The electoral battle in Bihar has acquired the character of a bipolar contest with Nitish’s JDU, Lalu Yadav’s RJD and Congress’ mahagathbandhan on one side, and the BJP’s National Democratic Alliance (NDA) with Paswan’s LJP, Upendra Kushwaha’s RLSP and Jitan Ram Manjhi’s Hindustan Awam Morcha (HAM), on the other.

These two major coalitions face issues not only of internal social chemistry but also of electoral arithmetic. Both, however, are putting up bold faces to demonstrate that ‘all is well’ in their respective coalitions. But, is all really well?

Both coalitions are proceeding on certain assumptions. The first is that the patch-up at macro level among leaders of coalition constituents will surely be reflected in the voting behaviour of their supporters at grassroots.For the mahagathbandhan, it means that the voters of different constituents will be willing to vote for the coalition candidate belonging to a party against whom they have been voting for years simply because their leaders have suddenly come together on a negative agenda to defeat the BJP. The very party whom the people so overwhelmingly voted to power for the national government!

A Nitish voter had been opposing a Lalu candidate for more than two decades and vice-versa, and now he or she is suddenly asked to reverse his/her voting preference. Such convenient conjectures tend to ignore simple human psychology.

The second assumption is that the Bihar election is a largely bipolar coalition contest and a coalition’s vote share today can be roughly calculated on the basis of what their constituents got in 2014 LS elections.

This assumption is logically flawed on two counts; one, while Bihar polls are by and large a bipolar coalitional contest, yet two other coalitions – the Left Front of CPI, CPM, CPIML and the Third front of Mulayam Singh Yadav’s SP and Sharad Pawar’s NCP – are also in the fray. It is true that the Left Front and the Third Front are marginal players, but, then, they are likely to be present in all 243 constituencies.

Hence, much will depend on ability of these marginal players to niche their pie of vote share in each and every constituency. That places the mahagathbandhan of JDU-RJD-Congress on a slightly disadvantageous position because both the Left Front and the Third Front are likely to eat into its traditional vote-bank.

Not only that, as to further compound the matters for both coalitions, some more players like Asaduddin Owaisi of  Majlis-e-Ittehadul Muslimeen (MIM) and Mayawati of BSP have decided to contest Bihar elections.

The coming of Owaisi is especially significant after his seven-seat triumph in Telangana assembly elections and two seats in Maharashtra. His party now appears bolstered to contest elections in the Muslim-dominated areas of Bihar (17%), West Bengal (27%) and UP (19%). The MIM’s decision to fight on 24 seats in the Muslim-dominated Seemanchal region may cause severe dent in Muslim votes of mahagathbandhan and end up brightening NDA prospects.

In 2010, BJP had won 13, LJP 2, JDU 4, Congress 3 and RJD 1 seats there though BJP was badly defeated in 2014 LS elections. Obviously, Nitish must be a worried man; to offset Owaisi effect, he hurriedly declared financial aid to 609 out of 2500 madrasas on 7th September 2015, most of which are located in Seemanchal region.

Similarly, Mayawati’s entry may also marginally dent NDA chances as she may eat up some dalit votes which seem to be mainly with NDA as both tall dalit leaders, Ram Vilas Paswan and Jeetan Ram Manjhi, claiming to represent the entire dalit and mahadalit community, are with it.

However, Nitish is claiming to have done a lot for the development of mahadalits, and may expect them to return the favours at the husting. All that becomes very important because each dalit/mahadalit vote will be very crucial to NDA as contest between rival coalitions appears very evenly balanced as on date.

Another flawed logic pertains to these coalitions calculating their probable vote and seat share by clubbing their constituents’ performance in 2014 LS elections. Such false arithmetical additions could be highly deceptive because the constituents’ vote and seat share in 2014 were obtained in entirely different context.  Doing simple arithmetic here can be dangerous for either coalition since it wouldn’t include various factors like new social chemistry, changed voters’ psychology and current political dynamics.