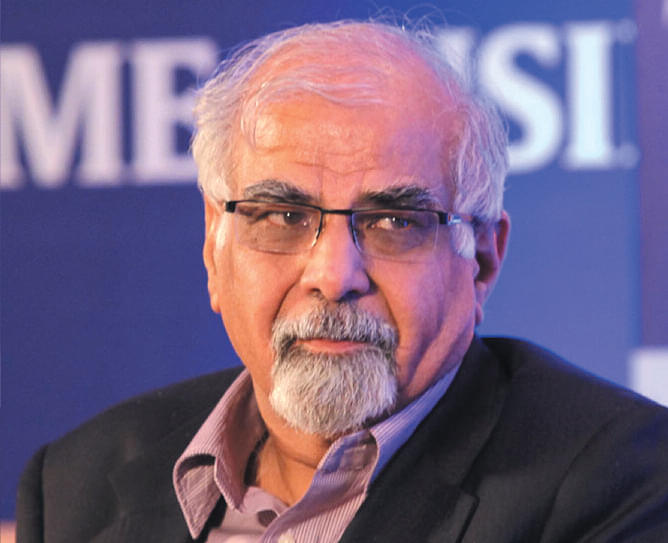 There is a concerted effort on the part of the Congress to project the current NDA government as UPA-3, and the media is playing by its script — well known commentator on economic affairs Surjit S Bhalla believes. His appearance on NDTV on 25 June made him stand out as a panellist who was speaking on technical grounds. Since he was not lent a patient ear, I thought of getting his opinion fully on l’affaire Lalit Modi. This is beyond what is written in his article in The Indian Express that says what Swarajya had said some time ago: Legally, the former IPL commissioner is not a fugitive.

There are so many citizens, including otherwise innocent ones, who have been served notices by the Enforcement Directorate (ED); that does not make them criminals or fugitives, Bhalla says.

I began by asking Bhalla why he did not protest on being called first a supporter and then a crony of the BJP on the said channel. He dismissed Sanjay Jha’s rant and said he couldn’t stoop to the Congress spokesman’s level to hit him back. He said he did not mind such epithets coming his way as he had been called a Congress crony, too, in the past.

Citing P Chidambaram’s articles and Jairam Ramesh’s press conferences, Bhalla said there was no difference between what members of the Congress were saying and the impression about the government a section of the media was projecting. If claiming that all of NDA’s programmes were a rehash of UPA’s was not sounding convincing, they hit upon the idea of accusing the present government of corruption as well — so that the BJP in no way looks different from the Congress.

Jairam Ramesh’s statement, “This has never happened in independent India before, where a former chief minister and leader of opposition has batted for a fugitive,” and then the message coming from the Congress that they would not allow Parliament to function in the Monsoon Session — “this is a bravado that comes out of a sinking ship,” Bhalla says.

Bhalla observed that the same documents were circulating across all English-language Indian news channels, with each one claiming it to be an exclusive story. When the script is so much alike, he believes, it cannot happen without someone dictating terms to the channels from the backstage. “The consistency in the approach of mainstream media suggests there is coordination going on. Each person is not doing an investigation,” Bhalla asserts.

The head of Oxus Investments finds Times Now given the most to hyperventilation followed by NDTV and India Today. “They are immensely biased; they need to be exposed,” he said.

I tell him that the Hindi language channels that I surfed did not seem to be fixated with Lalit Modi. Bhalla says, “Then one can talk about a conspiracy in a much cleaner manner.”

“I have said to these English channels that if there is an issue of national import, and not a local/Delhi issue, I don’t want to be there with an AAP guy. These channels — Times Now, NDTV and India Today — try to push these guys. What locus standi do they have? I just don’t understand. Basically it is to build up (a controversy to malign the government). This is something unusual. It cannot be that they can’t find anybody else. What I strongly feel and object to is that the news is much more biased than it has ever been. I have a lot of evidence to support that,” Bhalla said.

On the deal that Niyant Heritage Hotels Pvt Ltd of Dushyant Singh, son of Rajasthan Chief Minister Vasundhara Raje, had with Ananda Heritage Hotels Pvt Ltd of Lalit Modi via Mauritius-based Wilton Investments Ltd, Bhalla says that at the time of this deal, such transactions were not illegal. The previous government, he says, came under pressure of constant allegations of corruption against it and made the new rule banning such transactions later. While the new rule came into force in 2013, the Dushyant-Lalit deal is dated 2012 and before.

“If there is a disproportionate increase in your assets or valuation,” he says, “then the Enforcement Directorate can look into it even though you have filed your tax returns.” This new rule was made after IAS officer Ashok Khemka took exception to Vadra’s deals with real estate giant DLF. “Dushyant Singh is not liable for it because that law was passed after his deal with Lalit Modi,” Bhalla says. Only NDTV anchor Sreenivasan Jain pointed it out, the economist notes, but then he let it pass.

“Assume for a moment that this was wrong — I don’t think anybody doubts it happened — then what happens to Robert Vadra?” Bhalla questions, shaking his head vehemently in disagreement and then sighing, “Don’t these guys realise this?”

That brings us to the issue of retrospective application of law, where the economist finds it surprising that Finance Minister Arun Jaitley is not taking the decisive step of declaring null and void the law introduced by Pranab Mukherjee (now the President of India) as the UPA-2’s Finance Minister. Saying that the government will not appeal against the Bombay High Court’s October 2014 verdict favouring Vodafone is not enough, he believes, because the issue came back to haunt in March 2015 in the form of the government demanding Minimum Alternate Tax from companies. “Jaitley made the stupidest statement ever on this saying, ‘I can use this money for irrigation,’” Bhalla does not think the government explanation washes.

And then the liability suddenly reduces from Rs 42,000 crore to Rs 6,000 crore because of taxation treaties with Singapore and Mauritius, Bhalla notes, amused.

He says that the Prevention of Corruption Act made by the UPA stated that a minister or a bureaucrat would be liable for his decisions even after he is no longer responsible for the job or even after he has retired. This, Bhalla says, is the official explanation of Jaitley for wanting to change the law.

“I also have a mischievous explanation,” he says. “A lot of stuff that’s happening — and I’ve got confirmation of this from one of the ministries — everybody in the senior bureaucracy is beholden to the Congress. Most of the senior industrialists in the country also are beholden to the Congress. So, what better way than carry out a calculated campaign in the mainstream media that there is not a dime’s worth of difference between them and us?” Bhalla theorises, adding, “And what better way there is to demonstrate the point than the retrospective taxes?”

Why the Narendra Modi government is making the job of the Congress easier by persisting with some of the worst Congress-era laws and regulations is beyond Bhalla. But he is sure the media has a strong pro-Congress agenda. “Doesn’t Narendra Modi realise what’s going on?” he asks.

Before I met with him Saturday morning, I had found an industry angle to it in my talks with some BJP leaders, too. Mukesh Ambani, they allege, is peeved about two developments since the new government took over: The decision on oil prices and arrest of some people associated with Reliance Industries in the recent case of corporate espionage. The NDA government last October decided that Reliance would continue to get the old price of $4.2 mmBtu till it makes up for the shortfall in output from the KG-D6 block. Then in February this year, a Reliance Industries employee was arrested for being the recipient of leaked confidential government documents of Petroleum Ministry.

And Mukesh Ambani owns or has heavy stakes in more than half of the media industry. I share this theory floated by some BJP leaders with Bhalla. He does not rule it out.

The main story, he says, is that the BCCI is widely believed to be corrupt, as corrupt as the FIFA is believed to be, and many politicians and cricket administrators are embroiled in it. “I don’t think anybody should be protected,” Bhalla says, adding, “That is the larger story.”

He believes the only positive outcome that the IPL controversy could have is the government making a law to ban politicians’ entry into sports administrations. That would mean first asking the likes of BJP president Amit Shah and MP Anurag Thakur to leave. Even Narendra Modi or Arun Jaitley should not be running cricket bodies. “What do they know about cricket?” Bhalla questions. He believes it is time the prime minister sent across a strong message to everyone by taking this bold step abruptly.

He mentions here that there is no doubt Lalit Modi is a dubious character. “I have no illusion that he is Mother Teresa’s first cousin,” Bhalla quips, but then underscores the fact that it is not the legal position about him.

Elaborating on the media bias, Bhalla pointed at the debate on NDTV in the night of 26 June in which Vishnu Som talks about former judges of the Supreme Court Justice Jeevan Reddy, Justice SB Sinha and Justice UC Banerjee who “gave their legal opinion” — they did not depose — on the matter in a case in the United Kingdom involving Lalit Modi. The anchor insinuated that the judges’ integrity might have been compromised, Bhalla noted, and said this view of NDTV was untenable.

“It happens all the time. Legal opinions are sought from experts, and they give their views. In this case, they happened to be (retired) Supreme Court judges,” Bhalla said. If they couldn’t get hold of a judge, even that would be held against them, he argued.

“Every time these channels have been badly cornered, they change the terms of the debate,” Bhalla said, adding, “It is no longer about a fugitive.”