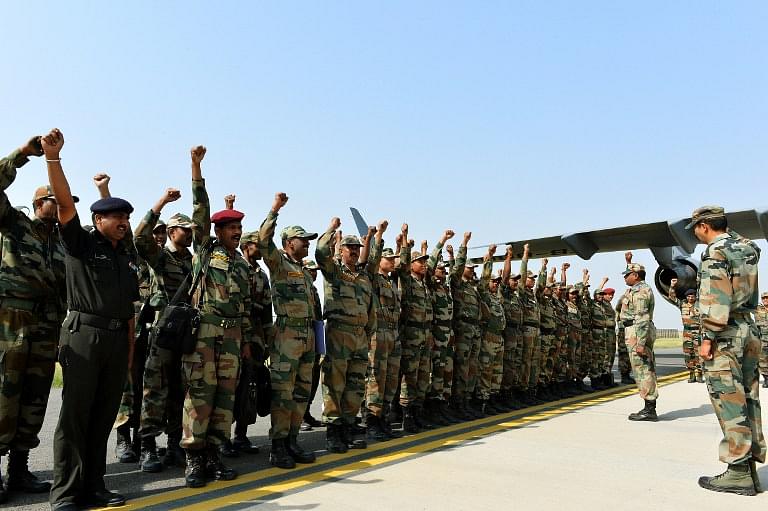 I firmly believe that there should never be outside interference in the functioning of the Armed Forces. They are fully capable of resolving their problems in house but there are issues which are sometimes beyond such resolution. That is when they need the support in sensitizing the right quarters about their problems. The strange situation of four posts of Lt Gen (Three Star) lying vacant, three of them top advisors of the Army Chief, does send some awkward messages.

The Army Chief is supported in his responsibilities by eight Principal Staff Officers (PSOs) besides the Vice Chief (VCOAS). Each of these PSOs has a huge inventory of issues, decisions on many of which they take themselves. Many are taken in consultation with the Chief, some are taken jointly in conjunction with the Chief and other PSOs and yet more are those to be sent to the MoD for final decision/approval.

Each PSO has a direct access to the Chief and many times to the Defence Secretary and Raksha Mantri too. The Army does have a time tested system of officiating appointments and does consider absence of permanent incumbents as an opportunity to train the next level to assume higher responsibilities.

That is an excellent institutional strength because someone will assume duties of the absent appointment unlike in many organizations where offices are locked along with files, and decisions pended. However, the issue in question is the quality of decision making and the degree of comfort that the Chief will have in dealing with officiating incumbents, with the wide seniority and rank difference. Moreover, no one ever seems to clarify why such a situation must arise.

When we learn the nature of appointments that are languishing for want of permanent incumbents it becomes even weirder.

The Military Secretary (MS), the person who plans careers and placement of all officers, especially crucial senior appointments is himself going to be in officiating capacity. It is an old convention that senior appointments of Lt Gens and Maj Gens are confidentially discussed between the MS and the Chief because no other uniformed person comes in the middle, even in the MS secretariat.

The MS is also the Chief’s sounding board on many other issues and is a difficult void to fill by an officiating incumbent. The Director General Military Operations (DGMO) is a high profile and crucial appointment.

While the MO Directorate is well served by some very competent officers and the two star rank officers are all individually outstanding, the level of confidence that the Chief has in dealing and discussing with his DGMO is immense, especially in crisis situations. Besides all this, the Army Commanders are scheduled to meet shortly for their half yearly conference in which major discussions in the field of operations, logistics and personnel management take place.

There is considerable effort put in to extract full benefit from such a conference where the field commanders bring their problems to the table and expect decisions. Many of these pertain to the field of operations. Without a DGMO, the conference will go through but much effectiveness will be lost. The MS is the Secretary of the higher promotion boards and to have someone officiating doing that service is not a done thing.

The Engineeer in Chief (EinC) is the only Arm (department) specific ‘head of the department’ who is also a PSO. The appointment is vacant as of Oct 1. It is the sheer weight of responsibility which gives the appointment the added status and thus direct access to the Chief. Few even with the Army realize just how many crucial areas come under him.

There are the Combat Engineers, the one who go into battle dealing with mines and demining/breaching, bridging, track construction, water supply in the field, demolitions and much more. Then come the Military Engineering Services (MES), partially manned by uniformed officers, JCOs and other ranks of the Corps of Engineers in addition to a civil cadre.

The MES is responsible for all Civil Works of the three Services through the Works organization spread across peace and field stations and there are hundreds of such stations with ongoing projects in the field of new construction, maintenance, roads, water supply and electric power. This is a crucial department on which depends the everyday habitat of the Armed Forces and thus the comfort of the uniformed men and their families. Most importantly the personnel management responsibility of the EinC Branch is crucial because of the multiplicity of cadres.

The Border Roads Organization (BRO) is responsible for the construction and maintenance of all lines of communication which constitute the term ‘infrastructure’, less the operational tracks. The BRO is headed by the Director General Border Roads (DGBR) who comes under the MoD. However a major part of the BRO is manned by Army personnel from different Arms and Services.

The management of all personnel of the Army placed on deputation with BRO comes under the EinC. With the extremely awkward situation arising from the virtual war between the civilian and uniformed cadre of the BRO on issues of seniority, command and control and responsibility, not having the EinC in place, even for a short while is detrimental to the cause of Army personnel.

It is not out of context to mention here that anomalies of the Sixth Pay Commission (SPC) and the Non Functional Financial Up-gradation (NFFU) applied to all Grade A organized services have created havoc in the command and control set up and personnel management of the personnel under EinC in a most negative manner.

Much time today and for some years is being spent unnecessarily in office politics, seniority issues and litigation which results in compromise of efficiency of organizations such as BRO and MES. With time scale, non-rank based up-gradation of civilians in these two cadres will mean a person much junior in service and subordinate to an Army officer suddenly jumping in pay grades, irrespective of rank promotion.

He may then claim he cannot report to the same Army officer he was reporting to due to higher or equivalent grade pay. Since Army officers do not get NFFU this anomaly has continued since the implementation of SPC. No serious efforts have been made towards resolving this impasse which is eating into the innards of efficiency of crucial organizations.

This is one of the most important reasons which have led to many demands of the Armed Forces for representation on the Pay Commission. Members of the Pay Commission need continuous and informed inputs of implications of their potential decisions and not just one off interactions with uniformed personnel.

In the midst of all this administrative chaos which was created by the hapless SPC under the UPA and which could not be resolved by five years of UPA 2, it is imperative that the current government seriously looks at the NFFU issue and its implications on efficiency. The Armed Forces are demanding the same and it is a matter of time before this demand snowballs further.

Anticipating problems similar to that created by NFFU in the case of areas where civilian and uniformed personnel work jointly, the Armed Forces are perceived to have denied the same to their medical personnel (Army Medical Corps) to whom apparently the provisions of NFFU were extended.

This has created angst within the medical personnel. It is indeed surprising how a Commission set up ostensibly for improvement of conditions of government personnel ends up in creating so much chaos that it affects the core functioning of a major part of the government itself.

To top it all the EinC’s appointment lies vacant today adding all kinds of unwarranted and totally uncalled for mis-perception about the reasons.

There has to be an institutional reason as to why this problem of appointments of the Army takes place once too often for comfort. That is not too far to seek and anyone who knows anything about cadre management of various organizations will appreciate what I have to say.

When you have a system in which officers serve at junior and middle ranks for 33 years and just 6 to 6.5 years in the senior most ranks of General Officers all kinds of problems will erupt. Just take a look at some:

I can see eyebrows being raised; the traditional questioning about what did I do about it when I had the opportunity as the Military Secretary. I am not duty bound to say anything but can reveal that in my short incumbency of that appointment the Chief did recommend a cap on approval percentages and we could reduce the service profile for promotion to Lt Gen by at least six months if not more. However, when another opportunity presented itself in the rank of Brigadier to Maj Gen the personnel managers did not grab it.

There are so many issues concerning personnel management which neither the Armed Forces nor the Government ever looks at. With someone like Manohar Parrikar at the helm, who is a man of detail and prefers innovative ways, this is the time when the Armed Forces must come clean with their personnel management issues instead of only looking for equipment related issues to resolve. After all the lesson from 1965 was clear – we won because of the man behind the weapon.