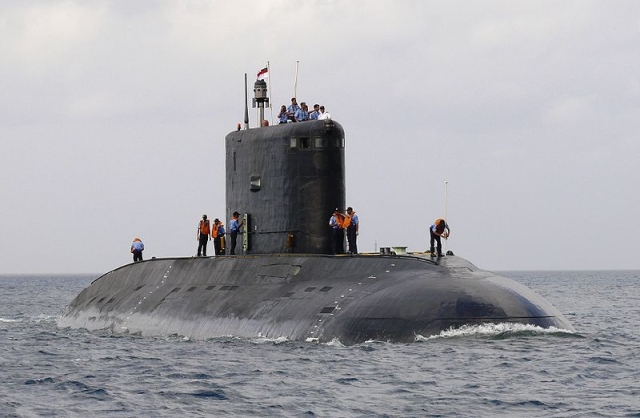 The Indian Navy’s submarine fleet suffered two decades of decline due to bad decision making and a host of scams. With the induction of new submarines the Navy has begun reversing the trend. Can it succeed?

Former Navy Chief Adm DK Joshi, in an interview to NDTV in October 2014.

Admiral Joshi had resigned February 26 that year, hours after a fire broke out aboard INS Sindhuratna, a 25-year-old Russian-made Kilo Class submarine, 50 km off the Mumbai coast. Two officers were killed and seven hospitalised.

An official statement said the Admiral had stepped down taking moral responsibility for the “accidents and incidents which have taken place during the past few months.” (while NDTV later took the interview off their website for reasons unexplained, it is still available here.)

In January 2014, INS Sindhughosh, the first of the series after which the class is named, had run aground due to low tide while entering Mumbai’s Naval dockyard.

In August 2013, The INS Sindhurakshak sank in Mumbai’s naval dockyard after a series of explosions in the forward torpedo bay, killing 18. The Sindhughosh, berthed nearby, suffered some minor damage due to the explosions.

Delivered in 1997, the Sindhurakshak was the 9th of 10 Sindhughosh Class (Soviet Kilo class) submarines built by the Russians for India. It was deployed near Karachi during the Kargil war of 1999, and in 2006, then President APJ Abdul Kalam became the first Indian head of state to sail in a submarine when he took a ride aboard near Visakhapatnam or Vizag.

In 2010, a fire sparked by a faulty battery valve while it was docked in Vizag killed one sailor and injured two. The 3,000-tonne submarine was shipped all the way back to Zvezdochka shipyard in Russia for an extensive and expensive repair and refit, expected to extend its life by another decade.

Handed back to the Indian Navy after almost two and half years in January 2013, it became the first Indian submarine to navigate under ice while returning. It was also hit by a severe Mediterranean storm near Alexandria, in waters too shallow to dive in, and had to be towed by Egyptian Navy tugboats to Port Said till the storm blew over.

In August, it sank in Mumbai’s Naval Dockyard after a series of explosions in the forward hull. While there were reports that it might have been sabotaged, a court of inquiry concluded that it was due to human error, and that several standard operating procedures had been ignored.

Whatever the reason, the sinking brought India’s submarine fleet down to 14.

Apart from the 9 surviving Kilo class subs, India also runs 4 Shishkumar class submarines, a variant of the Type 209 submarines developed by Howaldtswerke-Deutsche Werft, or HDW. Two were built in Germany while the other two were built in Mazgaon Dock, Mumbai.

Then there is INS Chakra, India’s sole nuclear-powered attack submarine of Akula II class, leased from the Russians for ten years in 2012.

To make matters worse, more than 50 per cent of these ageing vessels are either undergoing repairs or renovation, thereby reducing the operational fleet to barely 7 or 8 at any given point of time. Most of them are at the end of the traditional 30-year life-span.

(Compare that with China, which has 67 submarines, including nine nuclear-powered ones.)

“What also has to be seen is the impact on submarine arm for instance. Having been told you are an elite arm, run deep and run silent, we can’t even provide them with replacement batteries in time. A more untenable and ridiculous example cannot be given. Or we can’t give refits to ships in our own shipyards in time.”

If these accidents were not enough, both the HDW and Scorpene submarine deals were hit by allegations of kickbacks paid to Indian middlemen, including politicians, bureaucrats and even Navy officials.

India had bought the four HDW submarines in 1981. But when it sought two more at a discount in 1987, HDW declined, saying it had to pay a 7 percent commission. There were also reports that HDW had shared the specs of the submarines sold to India with South Africa, along with other classified data.

A case was registered against HDW and some of the alleged middlemen by the VP Singh government in 1990, but it was closed without any arrests or prosecution in 2005. There was speculation that the Navy put pressure on the government to close the case to ensure that the spares for the four submarines already in use by the Indian Navy were not impacted.

Similarly, there were allegations of kickbacks paid by Thales, a French multinational, to ensure the sale of French Scorpene submarines to India in 2005, in a deal worth 19,000 crores.

Again, after years of investigations, the CBI gave a clean chit to the government and Scorpene. On October 18, 2015, in response to a PIL filed by an NGO, the government reiterated before the Delhi High Court that ‘no kickbacks were paid in connection with the purchase of the Scorpene submarines.’

But all is not gloom and doom for the underwater warriors of the Indian Navy.

After a delay of four years and a cost overrun of almost $1 billion, the INS Kalvari, the first of six Scorpene submarines being built for the Indian Navy at Mumbai, was set afloat at the Naval Dockyard October 28. It will now go for extensive trial and testing before being formally inducted into the Indian Navy, in late 2016. If things go according to plan, five more will be delivered by 2020, at an average of one every nine months.

‘When we were embroiled with these allegations, we had journalists thronging our offices seeking scoops,” said a senior official involved with the Scorpene project in India. “Today, when we are marking the induction of the first conventional submarine since 2000 (when the last in the Sindughosh series, the INS Sindhurashtra was delivered), where are they? How many countries can build and deliver a submarine of this class, with stealth features, every nine months?” he asked wryly.

The government has also cleared funding for six new generation Project 75 (I) diesel-electric submarines to supplement the Kalvari class Scorpenes.

Then there’s the Arihant, India’s first nuclear ballistic missile submarine, which is out on trials. Navy officials are hoping it will be ready for induction before the Indian International Fleet Review in Visakhapatnam February 2016. Over a 100 ships from 50 nations, including the People’s Republic of China, are expected to take part in this review.

Four to six more Arihant class SSBNs, or nuclear powered ballistic missile Submarines, are in the pipeline, and plans to lease another Akula Class boat are likely to be finalised during Defence Minister Manohar Parrikar’s visit to Russia.

The government has also approved the production of six new SSN, or nuclear attack submarines (faster and leaner than the SSBNs) to be built jointly by the Navy’s Directorate of Naval Design, BARC and the DRDO. BARC has reportedly already started working on a new small reactor for these submarines, which might eventually be used to power some conventional warships as well.

In strategic terms, the ballistic missile submarine fulfils India’s triad (land, sea and air) nuclear capabilities, allowing it to launch a devastating nuclear strike even if the country’s land and air capabilities are taken out in a nuclear attack. The SSNs (or nuclear powered) and diesel-electric attack submarines are more tactical in nature, used for naval blockades and interdictions.

Once operational, these 30 new submarines will help the Indian Navy dominate the Indian Ocean and beyond, giving it formidable firepower and global reach.

But the proof of the pudding, as they say, is in the eating.

The foundation stone of The National Institute for Research and Development in Defence Shipbuilding (NIRDESH), India’s first centre for research and development in defence shipbuilding, was inaugurated by then Defence minister AK Antony in Challiam, in Kerala’s Kozhikode district, in 2011. Jointly funded by the four defence shipyards (Visakhapatnam, Mumbai, Kolkata and Goa) and the ministry of defence, it was billed as one of Asia’s largest centres for research and innovation in surface and submarine defence platforms.

But five years later, the project is still beset with issues over tenders, protests by local residents, and confusion and acrimony among its board of governors. Their website was last updated in June 2014.

And the issues raised by Admiral Doshi still remain.

“Perhaps I am being cynical, but I feel it is far too early to break out the champagne,” said a senior Navy officer. “After all, we all heard that almost $10 billion Rafale fighter was a done deal. Until, that is, it was suddenly undone.”