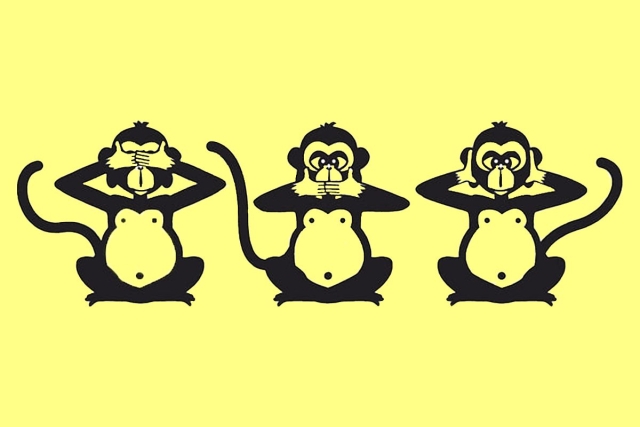 Shutting your senses to the real problem.

My school friend is neither an Islamist nor a closeted Islamist. He is a Muslim, husband to a non-converted Sikh.

I am a believer in the inclusiveness of our society. I do believe in Secularism as a system where the government does not discriminate between its citizens based on religion.

However, the average citizen (like me) is under no obligation to be blind to the religious/political/ethnic or linguistic affiliation of his fellow citizens when they are breaking the law.

The expectation doesn’t hold merit either socially or legally across the globe. Media houses routinely identify mobs with their ethnic background and so do people.

The story begins with my Facebook posts under a ‘No Comment Series’, in which I post stories of a community pelting stones on police and doctors, and misbehaving with nurses; all the posts are verified reports by reputed media organisations.

I did, however, censor myself from posting individual cases of vendors spitting on vegetables, treating them as stray crimes, miniscule compared to community crimes.

Besides, I don’t want to share gore 15 times a day. So I chose the most heinous crimes.

The series bothered many of my well-meaning friends, most of them from the entertainment industry. My Muslim friends chose to ignore the posts, save one.

The primary criticism against such posts has been that they amplify Islamophobia. While there is some merit to that argument, I believe social harmony is a collective responsibility. Besides, a criminal is a criminal irrespective of his caste, creed or colour, race and/or religion, or so we have been told.

The other apology argument is that the ‘Single Source Event’ is as callous as a group of people breaking quarantine for wedding, shopping and beach hopping and hence, the Jamaat can, at worst, be accused of ‘callousness’, but not of ‘criminal intent’.

The apologists conveniently ignore the shielding of foreigners who could be potential patients in mosques; stoning police which goes to take them to quarantine (not jail) and the disturbing fact that as late as mid-March, the preachers at Delhi Markaz of the Jamaat were telling the attendees to assemble to ‘beat the pandemic’.

Many doctors and health workers have been stoned for going to test potential patients, a crime unique to India during this pandemic.

Are we as citizens expected to maintain silence over this heinous chronology of repeated crimes just because the criminals belong to a community we have a soft corner for?

In case you are wondering, this apology for criminals is not limited to Islamists and/or self-proclaimed liberal journalists. Many of my well-educated engineering friends became apologists for Rajat Gupta, an IIT-Delhi alumni who was the first non-white Global CEO of McKinsey & Co.

Back in 2003, I would wake up at 7 am to attend his lectures at the IIT-Delhi campus. He was a national pride long before the era of Sunder Pichai, Satya Nadella and the likes.

Gupta was convicted of insider trading by a New York court and sentenced to jail.

I was shocked to find out that most of my college mates were defending him on social media. The only reason someone defended him was because the defenders identified with the label that Gupta had; in this case, IIT-Delhi alumni.

We self-identify with multiple labels that give us a sense of belonging and being part of a larger fraternity/tribe. The labels are useful and have helped us as a species to evolve through centuries, as explained in Israeli author Yuval Noah Harari’s Sapiens - A brief History of Humankind.

Today, we identify with multiple labels; I am an Indian, Bihari, Hindu, Rajput, Filmmaker, IITian, and the relevance of the label changes with time and place. In a US film school, I am an Indian first; in Delhi, I am a Bihari; at home, I am a Rajput Hindu; and at work, I am a filmmaker.

I am proud of all my labels and do not argue in favour of dismantling of labels, for they give us strength in times of crisis. However, my belief in any label does not supersede any one else’s Right to Life. The Right of Life is the most fundamental right that supersedes any nationalistic/religious or ethnic affiliation.

In that sense, whenever the life of a fellow human being is endangered, we have to shun all man-made labels.

In India, Secularism is more endangered than the proverbial ‘ghar ki izzat’ of a conservative family. A teenager smoking, on a bike, going to a cinema hall, talking to a girl/boy … ‘ghar ki izzat’ was always in danger.

Secularism too is in danger every time someone from a community commits a crime; now that label is being replaced by a global label of Islamophobia.

To my school friends and other well-meaning friends who self identify with the ‘liberal’ label, I tell you the same thing we told our relatives as a young adult - **** It!