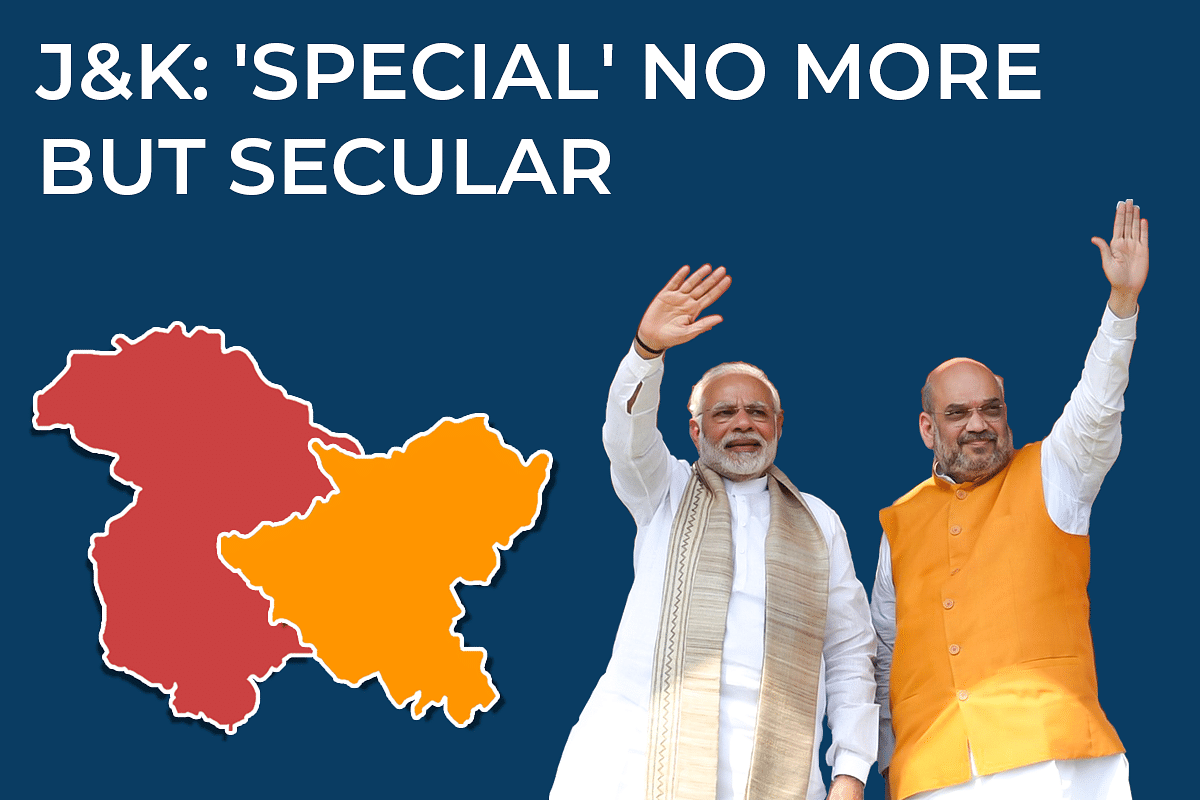 A lot has been said about the Indian government’s recent decision to override provisions of Article 370 1(d) through the presidential order and introduce and pass the Reorganization of State Bill in the Parliament. Many have called the decision unconstitutional, questioned the non-involvement of local leaders, and even outrightly labelled the way the decision was carried out as “draconian.”

Kashmir has always been a sensitive topic, not only for the people of Kashmir, and India but also for Pakistan. Many consider it the most disputed region in the world. With emotions running high, factual, and practical analysis gets muddled.

Firstly, if the government did not intervene the way it did, the status quo would have remained. Kashmir will continue to bleed due to the ever-increasing presence of insurgents represented by the Lakshar-e-Toiba, Hizb-ul Mujahideen, and their various associates.

After Hari Singh sought Indian military help in fighting Pakistani insurgents, a war ensued, which culminated into the forces on either side of the border stabilising along the present Line of Control (LOC).

In 1949, the area of Jammu and Kashmir which had been captured by Pakistan through the shift of the LOC was bifurcated into Azad Jammu and Kashmir (AJK), and Gilgit Baltistan. Kashmiris who have historically resided in AJK have since then been replaced by more and more Punjabis from the Pakistan mainland migrating into AJK.

Similarly, the Sufi-loving Shias have been replaced by the Sunni Pathans in Gilgit Baltistan. Today, India controls little over half of the Kashmir that was at pre-Independence. One-third lies with Pakistan, and another 15 per cent with China (Aksai-Chin).

The second myth is about the plebiscite that was to occur but never did. The only options provided in the plebiscite were to either join the Indian dominion, or Pakistan. Further, the plebiscite was pre-conditioned on Pakistani troops withdrawing their presence from the highly militarised border between India-Pakistan. This never happened.

Hence, even the claims that the plebiscite was withheld as a consequence of India not keeping its end of the deal are grossly inaccurate. In fact, the United Nations had recognised Pakistan to be an illegal occupant while allowing a minimal presence of Indian troops to maintain law and safety. Additionally, the plebiscite also maintained that both sides would retain the current demographic composition (as it stood in the 1940s) of Kashmir, post-plebiscite.

Now, assuming the plebiscite did occur, and J&K decided to join Pakistan. Considering how Azad Kashmir is now broken into AJK and Gilgit Baltistan, J&K would most likely be broken down into many parts as well. Let us also not forget that unlike India, Pakistan was not formed on a secular ideal.

The very reason that partition occurred, was because the leaders of Pakistan, represented by Mohammed Ali Jinnah, did not believe in the possibility of a secular state where Indians and Muslims could coexist. Most likely, another bloody migration would occur with Kashmiri Pandits, Buddhists, and tribals’ coming into India.

In such a circumstance, I cannot find Kashmiriyat enduring. Hence, the assumption that a J&K as part of Pakistan could hang on to its Kashmiriyat is a fallacy, not grounded in reason, considering the historical trajectory of what has played out on the Pakistani side.

More importantly, the notion that a plebiscite in the past could solve all problems is an oversimplification. Following the Shimla Agreement, and the Lahore Declaration, it was further settled that the issue surrounding J&K is supposed to be bilaterally handled. Therefore, any calls for UN mediation now, or involvement of foreign governments would go against the mentioned agreements between the two governments.

One has to also ask whether Kashmiriyat was ever-present in J&K? The answer is tricky. J&K was never a single entity – not during the times of Raja Ranjit Singh, as it was broken into many smaller districts and, neither was it ever represented by a single homogeneous population.

J&K consists of four major groupings of people — Kashmiri Hindus, including the Pandits, who were ethnically cleansed in the late 1980s. They have historically lived in Jammu. Kashmiri Muslims – who do not really owe allegiance to the “Muslim idea” themselves, nor side with Pakistan, but are a distinct community within themselves. They are mostly found in the Kashmir Valley. Today, their claims are centred more around freedom.

Buddhists, who again, are closer in their cultural values to Tibetans, than Indians, or Pakistanis, and reside in Ladakh. And lastly, tribals of various denominations mostly on the frontier regions of what is now Gilgit Baltistan. They too are not culturally close to Pakistan but are of Central Asian ancestry.

As mentioned earlier, maintaining the 1940s demographic composition is a pre-condition of the plebiscite. The demography in Pakistan’s Azad Kashmir has changed drastically. Similarly, the demography within the Indian side has changed too.

At the time of Independence, the population of Jammu was much more than Kashmir. Today Kashmir has a larger population. The Hindu Pandits who lived in Jammu were also ethnically cleansed in the 1980s, although they were permanent residents of the state, whereas, the number of Muslims has increased in the state as a whole.

Considering that any plebiscite today would apply uniformly to the whole region of J&K as it stood post-Independence, makes the matter even messier, as even Pakistan would not agree to a plebiscite in Azad Kashmir.

Considering the situation in Pakistan, where calls for “Azadi” abound from various ethnic groupings like Baluchs, Pakhtuns, and Sindhis, Pakistan is unlikely to ever agree to any request for a plebiscite, or for that matter to part with its Azad Kashmir.

Hypothetically, the Government of India, if it wants to call Pakistan’s bluff, can always propose that a plebiscite, including a freedom option, be conducted. Undoubtedly, Pakistan would never oblige (nor would GOI ever do the same). If we, going on the 1940 principle, include even Aksai-Chin, and involve China, the matter further complicates.

These various moving parts are at the crux of the seven-decade long lockdown playing out in J&K. It is also the reason that the Government of India and Pakistan have accepted the LOC, more or less.

India has also reluctantly resigned to the LOC bordering Tibet Autonomous Region (TAR) with China. Further, both parties, scared of losing their constituent parts of the historical state, have also not pushed for a plebiscite, suppressed calls for freedom, and accepted bilateral solutions.

Another question going around in the context of India’s actions is - why now? This is even justified considering the image of the BJP as a right-wing Hindu-nationalist party in the western media. However, the very fact that Article 370 was a temporary provision of the Constitution, and Article 370 1(d) was rendered following a Presidential Order that limited Part III of the Indian Constitution as it applies to J&K, says enough.

Nehru and the fathers of post-British Raj India had always aimed at integrating J&K wholly into the Union. Conditions in the first two decades after Independence were certainly not in India’s favour.

Given the wars it fought on both fronts, as well as the various calls for secession in many states, and the presence of the Red-Corridor as represented by the Naxalites, Pakistan, also, was militarily, and economically, stronger than India up-until the 1990s.

Although, the Jan Sangh (the precursor to the BJP) had always had full integration and abolishment of the special status of Kashmir as its core issue, all BJP-led governments (and governments in general in India in the recent decades) were coalition governments.

India’s strength today as a major player, the stabilisation of issues in the other problematic Indian regions, as well as Pakistan itself being reduced to a failed state, compounded by the thumping victory BJP enjoys today – made now the right time to follow through with BJP’s electoral promise. The civilian killings in J&K have also been reduced by over 90 per cent since 1990.

Most importantly, Narendra Modi’s success lies in his ability to deliver on promises, as well as the developmental agenda that is the key to his popularity. Due to the limited application of Part III in J&K, equality of opportunity and provisions for minorities (women, Ladakhis, Hindus, et cetera), have been absent until now.

The state has also not followed the delimitations guidelines based on the principles of area, population, and communication, thus leading to a situation where the Kashmir Valley, gets disproportionately more seats and decides the fate of the whole state.

The Kashmir Valley itself has also been dominated by the two political families of the Abdullahs and the Sayeeds, who at various times have co-opted the central government whenever they ran a few seats short.

The decision to split the state into two union territories is also not dissimilar to what Pakistan has done with its part of Azaad Kashmir. Hence, Pakistan’s hue-and-cry is invalid. For India, the Centre’s decision would not only allow people to invest in J&K (which was till now a right only enjoyed by permanent residents of the state) but also give the erstwhile state a footing equal to that enjoyed by the rest of the country.

Minorities, especially the Ladakhis who had till now been overlooked, would also be able to express themselves as rightful stakeholders of their constituency. Considering the growing synergies between India’s historically prickly neighbours China and Pakistan, and the anticipated withdrawal of US troops from Afghanistan, the decision also serves India’s own strategic interests of maintaining peace in the region and ensuring its own interests.

Lastly, let us explore a final misconception. Assuming that J&K did indeed secure independence. Pakistan would most likely take over. Even if it does not do so formally, insurgents will make it a de facto Pakistan state.

Let us not forget that the operational argument extended by the state of Pakistan has always been that “they are victims of terrorism.” If, despite seeking fat monetary packages from the US in particular, and the world at large, Pakistan could not contain terrorism in its land, what is the assurance it could help prevent the same in a truly “Azad” J&K?