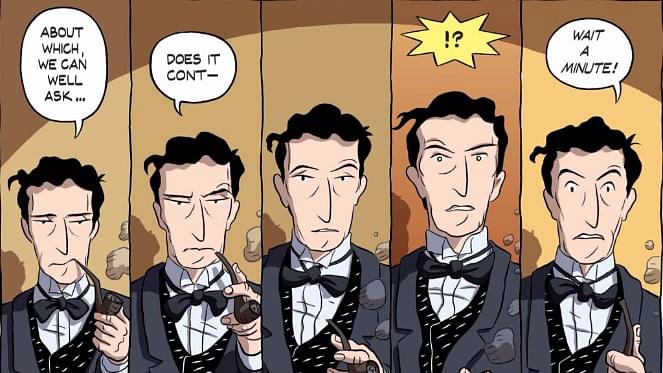 Logicomix: An Epic Search for Truth

The graphic novel Logicomix: An Epic Search for Truth (2009) by Apostolos Doxiadis and Christos H Papadimitriou is a unique attempt in literature – mathematical ideas transmitted through the medium of a comic book.

A few words about Doxiadis. A mathematics graduate from Columbia University, Doxiadis pioneered the genre of mathematical fiction with his book Uncle Petros and Goldbach's Conjecture (first published in Greek in 1992 and then in English in 2000). The book features a mathematician Petros Papachristos who devotes his entire mathematical career to proving what is known as Goldbach's conjecture.

The conjecture is deceptively simple: it states that “every even number greater than two is the sum of two primes”. It is one of the great unsolved problems in mathematics along with the Riemann hypothesis.

Uncle Petros, as narrated from the perspective of his nephew, makes for an intoxicating read. (Indian readers will find it interesting that Srinivasa Ramanujan, the native-born genius, makes an appearance in this book.) Petros fails grandly in his endeavour – the conjecture remains unproven. Petros' life could be compared with that of great artists like Vincent van Gogh and Mozart – a poignant reminder of the agony and suffering that accompanies great creativity.

The other co-author of Logicomix, Papadimitriou, is a professor of Computer Science at the University of California at Berkeley. He has written the novel Turing: A Novel about Computation (2003) and is a great advocate of teaching children mathematics through fiction.

Logicomix traces the life of British mathematician and philosopher Bertrand Russell, and its underlying theme is the struggle of Russell and other logicians in their search for truth and certainty in mathematics.

At the end of the nineteenth century, with the advent of non-Euclidean geometry and other ideas, a strand of pessimism had crept into mathematics. "Ignoramus et ignorabimus," the pessimists seemed to say (a Latin maxim that means "we do not know and will not know").

“In mathematics,” he declared, "there is no ignorabimus".

It was in this exhilarating period of great hope in the certainty of the laws of mathematics that Russell started writing his The Principles of Mathematics. This led him to the discovery of the famous Russell's paradox: "Does the set of all sets which do not contain themselves contain itself?" An explanation of this paradox is given in Logicomix by the means of an analogy:

"Imagine a town with a strict law on shaving. By it, every adult is required to shave daily. But it is not obligatory to shave yourself. For those who don't want to, there is a barber. In fact the law decrees: 'Those who don't shave themselves are shaved by the barber.'

"It sounds innocuous...However, if taken literally, it leads straight to paradox! For, you see, the question arises: 'Who will shave the barber?' He obviously cannot shave himself, for being the barber, it would mean that he is shaved by the man who shaves only those who don't shave themselves! But he can't 'go to the barber', for again, that will mean he'll shave himself, which the barber isn't for!"

The publication of the paradox at the time was greeted with joy by mathematicians such as Henri Poincaré, who believed in intuition, and with dismay by others like Hilbert, who swore by contradiction-free logic.

Russell himself was uneasy with the paradox. He subsequently teamed up with Alfred North Whitehead to work on circumventing it.

He thought as follows (again the graphic novel uses the barber analogy): "Take the 'Who shaves the barber?' problem. Now, imagine the barber's village to be situated in a society with a caste system. Call it castes 1, 2, 3, 4 where caste 4 is higher than 3, 3 higher than 2, 2 than 1.

Of course, this would mean that a large part of set theory would be thrown out with the paradox, and one would get unshaved '1's. But that is all they had to go by.

Using this theory of "types", Russell and Whitehead attempted to rebuild logic from scratch by circumventing Russell's paradox. This effort went on for 10 years and the final product was Principia Mathematica. This 1,000-page-long book proved, among other things, that 1+1=2, a monumental task that took 362 pages – to prove what every child knows.

Russell claimed, "It's the price you have to pay for being truly certain."

I have not read Principia Mathematica and cannot claim any first-hand knowledge of its contents. But I have heard that the book lacked a certain completeness; no matter how deep they went, their too-solid system was being built on sand.

It was left to the Austrian mathematician Kurt Gödel, who took off where the Principia left, to demonstrate (in the Incompleteness Theorem) that the truth – or falsity – of every logical proposition cannot always be proven. There will always be unanswerable mathematical questions, however correctly formulated.

Those, like Hilbert, who had expected a confirmation of their most cherished vision ("There is no ignorabimus.") got something entirely different.

Another theme that threads through the narrative is the link between logic and madness. Cantor, the inventor of set theory, went insane in his final years; Russell and his student Wittgenstein were driven to the brink of insanity; Gödel died of starvation in 1978 after an attack of paranoia; both Russell and Hilbert's sons were deranged.

So what is the moral of this dismal story? The authors suggest, surprisingly, that this story has a happy ending. All the development in logic reached its peak with the development of the ultimate logic machine: the computer. Both the Turing architecture (proposed by Alan Turing) and the von Neumann architecture (credited to John von Neumann) were built on logic, and computer logic became a tool to solve the most challenging problems. Turing and von Neumann, say the authors, became the "proudest sons" of Russell and other logicians. Quite a climax!

Ideally suited for young adults, Logicomix was an international bestseller when it was first published, and has won numerous awards such as the Bertrand Russell Society Award. It was also chosen as the Non-Fiction Book of the Year by TIME magazine.