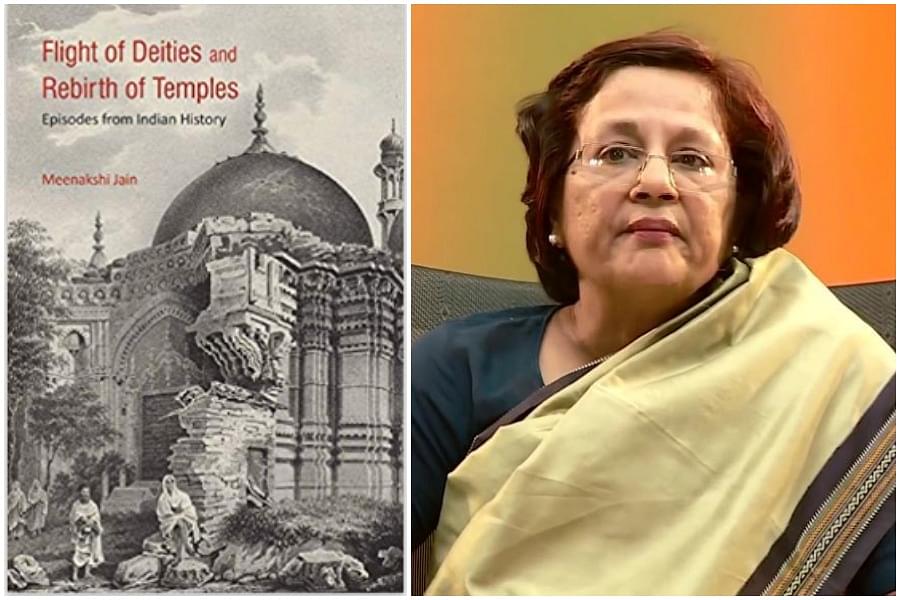 The cover of Flight of Deities and Rebirth of Temples: Episodes from Indian History by Meenakshi Jain, right.

The late Sita Ram Goel, dharmic warrior, Hindu activist and author of several books on Islamic iconoclasm in India, was the first writer to rout Left historians with evidence. His seminal work – Hindu Temples: What Happened To Them – published in two volumes, destroyed these historians’ attempt to present India’s Islamic rulers as benign despots who destroyed temples merely out of the need for plunder and political dominance. Worse, they inserted deliberate lies into the narrative by suggesting that Hindu rulers were doing much the same thing, destroying and desecrating temples well before Muslim rulers invaded India. So, the bad example was set by Hindu rulers.

Anyone with an iota of commonsense would reject such a-historic assertions out of hand for the simple reason that the destruction of idols is central to the Muslim faith, while there is no such requirement in the Hindu, Buddhist and Jain traditions of India. Idol destruction began at the time of the Prophet himself, when he destroyed 360 idols in the Kaaba after returning victorious to Mecca. Since then, rare was the Muslim ruler in north India who failed to destroy idols whenever he could. If today the best Indian temples are in south India and not north India, it has Islamic iconoclasm to thank.

Meenakshi Jain, Senior Fellow at the Indian Council of Social Science Research, is one of the few intrepid modern historians to take the Sita Ram Goel enterprise forward by delving deep into the traumatic period of Islamic and colonial rule. Her books include Rama And Ayodhya, The Battle for Rama, Sati, and a three-volume study titled The India They Saw: Foreign Accounts of India from the 8th to Mid-19th Century. The Battle for Rama has been ignored by mainstream historians because it clearly establishes the validity of the Hindu claims for a Ram temple in Ayodhya.

If Sita Ram Goel made Islamic iconoclasm irrefutable, in her latest book, Flight of Deities and Rebirth of Temples: Episodes from Indian History (Aryan Books, Rs 995, Pp 405), Jain takes the story deeper and documents the efforts a defeated Hindu people made to save their deities and rebuild their temples whenever they got the opportunity. There are several score full-fledged and mini-stories of how Hindus protected their religious heritage with minor and major acts of defiance and determination over centuries, sometimes hiding their deities or burying them to prevent the iconoclasts from destroying sacred idols.

From the first Islamic depredations dating back to the invasion of Sind by Muhammad bin Qasim in 711 CE and going all the way to the eighteenth century, when British colonialism ended Mughal hegemony, which allowed for a small resurgence in temple-building, Jain gives us a panoramic view of the Big Truth. She gives the final lie to the Leftist effort to find false equivalence between some temple desecrations by Hindu rulers and the vastly unimaginable scale of Muslim destructiveness.

Jain points out how some historians, in order to justify Islamic iconoclasm, reduced Hindu temples to “pre-eminently political institutions”, thus making them justifiable targets for Islamic attack. But missing from this argument is any real example of Muslim rulers destroying mosques using the same logic – to establish political supremacy. Writes Jain: “Temples have been downgraded to transactional institutions concerning king and deity alone, divested of all sacredness. The millions who thronged to them over the centuries have simply been erased from history.” But “if temples were symbols of royal authority, the reasoning apparently did not apply to mosques.”

Jain’s Flight of Deities contrasts the Islamic need to destroy temples and idols with cases of Hindu kings who merely appropriated deities in order to establish their supremacy. The case of Vatapi Ganesh is instructive. When the Pallava King Narasimhavarman defeated the Chalukyan ruler Pulakesin II in the battle of Vatapi (642 CE), his general brought back the image of Ganesh from there and installed it in his birthplace of Tiruchenkattankudi near Thanjavur (Tamil Nadu). Twelve hundred years later, in the eighteenth century, the south Indian musical trinity of Tyagaraja, Muthuswami Dikshitar and Shyama Shastri immortalised the Vatapi Ganapati by composing soulful lyrics in the elephant god’s honour.

Concludes Jain: “In the overwhelming number of cases of image appropriation, victorious Hindu kings instated them in grand temples. Muslim rulers destroyed entire temples, and where that was not possible, disfigured the images.”

But the interesting element in Jain’s book is not the repeated destruction of temples, but the “repeated endeavours to reconstruct them”. Jain notes that “the Keshava temple at Mathura, the Vishwanath temple at Kashi, the Somnath temple in Saurashtra (and) the Ram mandir at Ayodhya were among the shrines continually restored, well after Hindus had lost all semblance of political power… In many cases, the reconstructed shrines had unknown patrons, pointing to the feebleness of the theory that restricted temples to an alliance of king and deity.”

Jain’s book, which is divided into 16 chapters, does not follow any linear logic, where a story flows from its logical beginnings to a grand finale and conclusion. So, the reader can, after going through the introduction, start with any chapter and still not feel lost. The thread that connects all chapters is Islamic iconoclasm, not chronology or spatial progression. This, as the author herself explains, is the result of the fact that “different regions were attacked at different times by different people, and within regions some temples were repeatedly desecrated over the centuries.” (Somnath, for example).

The book, however, begins at the right place – the Sun Temple at Multan – for the invaders invariably came from the west, and Sind was the first Hindu kingdom to be subjugated. The second chapter on temple desecrations in Kashmir is particularly important, for most Hindus do not know that this region has been the centre of Indian civilisation for centuries, and Kalhana, who wrote Rajatarangini, talked of it as the place “where there is not a space as large as a grain of sesamum without a tirtha.” Kashmir was also the route through which other Indic religions like Buddhism spread to China and Tibet.

So, those Hindus who think that Kashmir is all about its present Muslim majority, should think again. It is the very core of Indic civilisation, with the temple of Ma Sharda epitomising Kashmir’s reputation as the land of learning. The Adi Sankara was recognised as a true religious scholar at this temple. The main temple wrecker in Kashmir, including the famous Martanda temple, was Sultan Sikander (1389-1413). For modern-day Indians, Kashmir’s Indic antiquity should be enough justification for its eternal retention in India, never mind the religious demography of today.

In later chapters, Jain describes the temple desecrations of the holiest of Hindu shrines in Mathura, Kashi and Ayodhya, and then similar destructions in central India, Gujarat, Maharashtra, eastern India, and finally in the south, where Malik Kafur, Alauddin Khilji’s notorious general, started the damage.

This book ought to be part of every Indian’s library, not in order to embarrass present-day Muslims who had nothing to do with this desecration, but as a reminder of the damage done to truth by Left-wing historians. Like Sita Ram Goel, Meenakshi Jain will seldom be acknowledged in mainstream media or invited to Lutyens zone discussions on Indian history. That is a tribute to her tenacity and commitment to correct the distortions introduced by Marxist versions of history.

Postscript: The Islamic destructions may be over, but in Dravidian Tamil Nadu, the wanton demolition of heritage continues. In 2016, an eleventh century Chola temple, the Naganathaswamy temple in Thanjavur, built around the time of Rajendra Chola, was demolished for renovation. In Chhattisgarh’s Bastar region, suspected Naxals threw a 1,000-year-old Ganesh idol down a mountain slope in 2017, breaking it to pieces. It has since been stuck together, but the damage to heritage cannot be undone.

Islamic vandalism may have ended, but its successor ideologies from the Left have not lost their iconoclastic fervour.