Samanya Dharma: Nithin Sridhar Weaves A Tapestry Of Common Ethical Duties For All 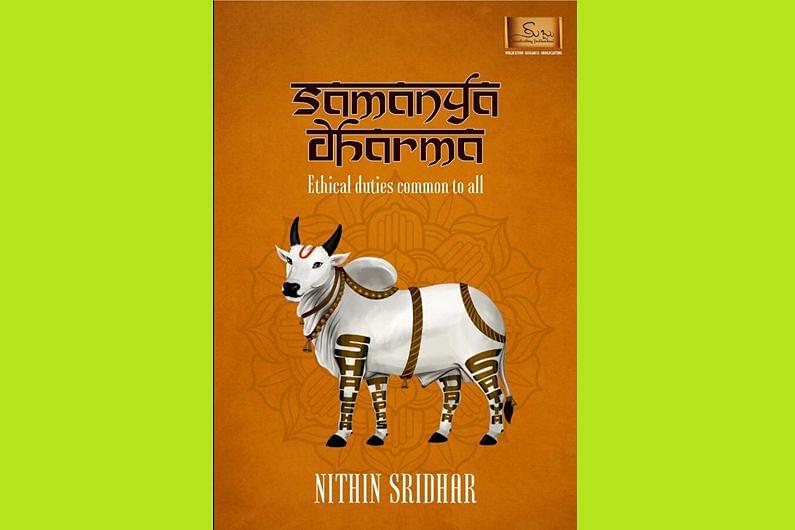 Samanya Dharma: Ethical Duties Common To All by Nithin Sridhar is a remarkable effort to piece together the various perceptions of this key concept.

The author handles a heavy topic with great ease and finesse. The book weaves a tapestry of common ethical duties for all and is an easy read. It is also a must-read for anyone who understands their place and purpose in the world.

The prayer from devas to dharma sourced from Varaha Purana welcomes us into the fold of the greatness of Sanatana Dharma and the introduction seamlessly takes the reader into finer nuances of the concept.

Sridhar skillfully delineates the understanding of chaturvidha purushartha or the framework of life in Sanatana Dharma and the role of this framework in Hindu philosophy.

The development of intellect in human beings is a remarkable occurrence but this in itself turns into an impediment in the form of memory and imagination. The first section focuses on how the framework of chaturvidha purushartha and the four-fold goals of human life namely, dharma, artha, kama and moksha fit into the larger scheme of supreme emancipation.

Section two of the book talks about dharma from the perspective of Mahabharata, Mahanarayana Upanishad, Taittiriya Upanishad and Vaisheshika sutras. This section seamlessly weaves the upanishads and the references of dharma within connecting Brihadaranyaka Upanishad with Adi Shankaracharya’s commentary.

There is a great sub-section on Rta as universal order, satya and dharma that is lucid and profound at the same time. The passage that describes the explanation given by Shatavadhani R Ganesh taps into the spiritual dimensions of dharma.

Section three focuses on dharma specific to yugas, temperament of people, and stages of life.

Sridhar also mentions how dharma varies during times of calamity and sorrow along with tenets common to everyone. Samanya dharma is applicable to everyone based on their time, place, varna, guna, ashrama etc. This section also focuses on svadharma and how it is a combination of samanya dharma (common duties) and vishesha dharma (special duties).

Section four is an elaborate segment focused on the scriptures and how they consider certain tenets, duties, obligations etc, more or less common to everyone irrespective of age, gender, class, status, time or place.

The author starts the section with a discussion of shrutis and establishes firmly that vedas are the root of samanya dharma. Manu Smriti is recalled to support it. The note from Rigveda Samhita that states that one who eats without sharing food commits great adharma is a fine starting note that provides a very relevant example that can relate to lived experience.

The references from vedas that highlight compassion for all or the tenet of akrodham or freedom from anger or upholding the quality of charity by prayer that should be gathered by hundred hands but given away and shared with a thousand hands are truly remarkable.

Isha Upanishad, Taittreya Upanishad, Chandogya, Brihadaranyaka, Arunya, Maha upanishads are some of the upanishads referenced and highlighted in the sub-section on vedas.

The sub-section on smritis and dharmasutras is quite elaborate even though only Manu, Yagnavalkya and Vishnu Smriti along with Dharmasutra of Vasista have been considered for exposition.

The Manu Smriti focuses on duties based on varnas and the tenets laid out are ahimsa or non-violence, not just of the physical body but of mind, speech and action.

Non-violence described in this sub-section under the heading also includes all other living beings even in the form of words or curses in the domain of speech.

Any thought of hurting others physically or mentally also amounts to himsa with respect to mind. Perception of all life within oneself is described as a central idea and this perception.

Practice of non-violence includes continuous restraint of the mind and senses; it is considered highest damam and tapah. Sacrifice of one’s ego, self-serving desires and ambitions and other adharmic activities are discussed at great length.

A clear resounding clarification of ahimsa as the practice of non-violence but not out of self-serving and selfish motives is provided along with the narratives of a soldier’s dharma, sacrifice of animals in yagnas for larger good.

Vasista Dharmasutra is discussed at length to provide details of such sacrifices for the well-being of society. Totalitarian non-violence in relation to those that have renounced the world in comparison to limited use of violence by those that are grihastas are elaborated.

The next tenet to be discussed is satyam where Yaiitreya Upanishad and the explanation of truth in Ayodhya Khanda of Ramayana by Sri Rama is discussed. A similar description from Shanti Parva of Mahabharata is also discussed.

The alignment of thought, speech and action is highlighted and Manu Smriti is brought to the fore to wrap up the discussion of the topic. The third tenet discussed is asteya. Kurma Purana is discussed in relation to the non-acceptance of stealing.

It is interesting to note how the author is able to connect misappropriation of property or funds to asteya. Along the same lines, stealing of ideas and intellectual property is also considered asteya along with kidnapping people literally. This tenet also includes not lusting after another’s wife or cultivating physical relationship with somebody else’s partner etc.

Shaucham is the next tenet discussed; and it refers to cleanliness describing both internal and external.

What is interesting is that some of these practices remain intact even today. The ashvadvarga to include lust, anger, pride, greed, attachment and jealousy are to be purified to meet the requirements of internal cleanliness. Indriya nigraha is the control of mind and senses, and is the last tenet discussed from Manu Smriti.

The 11 sense organs and how they create attachment through perception are discussed. The discussion on how the mind and senses are to be restrained is quite riveting and this sub-section on Manu Smriti culminates with the same.

The nine tenets of Yagnavalkya Smriti include the five described by Manu and four more, namely, danam, damah, daya, and kshanti.

Shandilya Upanishad, Bhagavad Gita are cited in describing types of charity based on gunas. Adi Shankaracharya’s Vivekachudamani and the concept of titaksha or the ability to endure suffering without struggling for revenge summarises this sub-section.

Vishnu Smriti with its 14 tenets followed by Vasista Dharmasutra with its five tenets are delineated. Arthashastra is the next shastra described and Kautilya’s exposition on non-violence, truthfulness, purity, compassion, forgiveness, non-jealousy etc, are described.

The next set of probes into samanya dharma are into itihasa and purana. Mahabharata, Agni Purana along with Vamana and Bhagavata Purana are used to throw light on the duties common to all.

In Mahabharata, Bhishma explains the duties common to all varnas in the shanti parva.

In Vamana Purana, King Sukeshi is educated by a congregation of rishis on 14 tenets of dharma that are applicable to human race.

Interestingly, the importance of svadhyaya is listed here followed by the meaning and features of yagna.

Finally, Bhagvata Purana is discussed with its two lists of samanya dharma in two cantos.

Iksha and atma vimarshanam are two interesting tenets being discussed.

Finally, Agni Purana provides a very good closing for the section with an appropriate context for pilgrimage, pitra pujanam (worship of ancestors), astikyam (piety) devotion to king, following law and rules of the day etc. Agni Purana is an inclusive end to the discussion of samanya dharma in shruti, smriti and shastras.

Section five deals with social issues and deviations in the physical, social, psychological and spiritual domains.

The section basically is focused on how samanya dharma can alleviate the issues plaguing society at large. Crimes, corruption, poverty, lack of accountability, kidnapping, murder, human trafficking, religious and caste violence, rapes etc, are looked through the lens of samanya dharma. Human agency, gunas, arishdvarga are discussed followed by references from Manu Smriti.

Section six deals with spirituality, in the context of yoga through elaboration of Patanjali’s sutras and the eight limbs of yoga are discussed.

This is a sub-section that holds our attention and grips our understanding of samanya dharma. Bhakti and Vedanta in relation to the common ethical duties for all are discussed.

All in all, this is a fantastic read for scholars, practitioners or even those that are trying to understand their cultural roots.

The book is an easy read and Sridhar ensures that the reader is not lost at any given point. There is great clarity in the scope and sequence of the book and the flow of scriptural understanding is never too heavy or boring.

Kudos to the author for bringing the understanding of samanya dharma to the common man and making it inclusive of all perspectives of dharma.