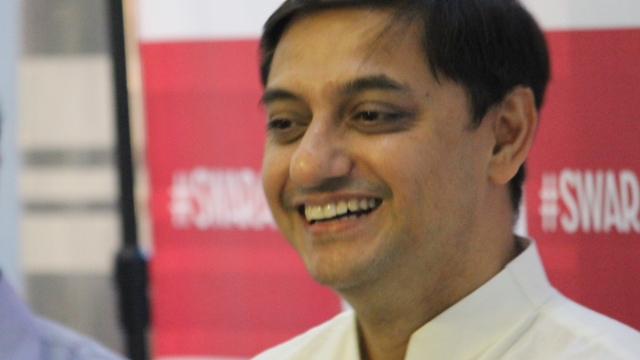 ‘Swarajya Conversations’ is a brand new series of events which will consist of a 60 minute tête-à-tête between a distinguished guest and our host. Conversations will feature thought provoking discussions with some of India’s leading thinkers, economists, technologists, business leaders and figures in public life.

The first Swarajya Conversations event was held in Chennai on the 9th of February 2016. The speaker was Sanjeev Sanyal a historian, urban designer and an economist. Sanjeev Sanyal is one of Asia’s leading economists, best-selling author of Land of the Seven Rivers: A Brief History of India’s Geography, Eisenhower Fellow and Rhodes Scholar,

Chandu Nair hosted the event. Chandu Nair is the co-founder of Scope e-Knowledge Center, a pioneering knowledge process outsourcing company that scaled up to 1000+ people before his exit, his areas of focus were business development and fund raising, and his passion was enterprise building and transformation.

The subject was, “On Global Economic Trends And India’s Challenges”.

Discussing a wide range of topics in economics, Sanjeev Sanyal spoke at length about the China factor in the global economy, the downstream effect of the Chinese slowdown and how the country would deploy the excess capital it accumulates. He also spoke at length about demographics and explained how many of us may end up working well into our 70s. The discussion also veered into how India’s cities must be organised to capitalise on the new knowledge economy.

Towards the later part of the the discussion Sanjeev Sanyal dwelt on the Arthashastra and Ashoka’s Edicts and how King Ashoka was ‘anti-Kautilyan’ in many ways. Sanyal, a firm believer in a ‘Chanakyan State’ spoke about how a strong and a limited state is important. He explained how modern Leftists have appropriated the Ashokan ideal of a nanny state to give legitimacy for their welfare state rather than adopt the Kautilyan model .

The last few minutes were spent on discussing ‘complex adaptive systems’ in which a large number of independent or semi independent agents are continuously interacting with each other and are adapting to the existing system. Examples of cities, businesses and cultures were cited. A short Q&A session with the audience brought the event to an end.