The Silent And Sombre Savarkar 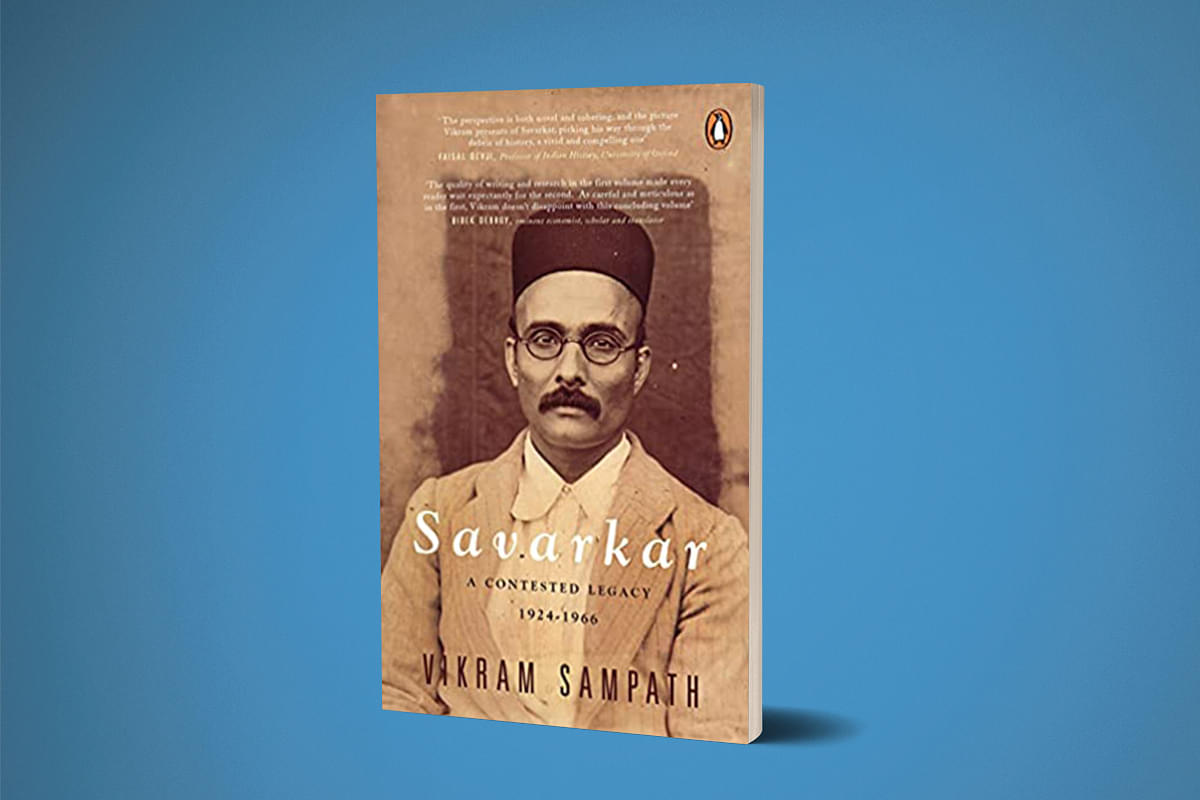 The case trial formally began on 27 May — ironically, a day before Savarkar turned 65 when he was to face one of the biggest challenges in his life.

Excitement and tension were rife in the courtroom among everyone who had gathered in the sweltering summer heat of Delhi in end-May. Even as the proceedings began, Bhopatkar informed the court that given his client Savarkar’s frail health, he should be given a comfortable and cushioned chair and not made to sit on the wooden benches with the other accused.

The judge immediately acceded to the request. Other than Savarkar and Nathuram, who had sullen, sombre faces, all the other accused seemed to be happily smiling and joking with each other.

Savarkar came to court in dhoti, shirt and an open collar coat, his high-walled black cap, his pince-nez and chappals. He sat pensive and silent throughout the proceedings, only occasionally exchanging a few words with his counsel Bhopatkar or Ganpat Rai.

During the whole trial, I never saw Savarkar turning his head towards even Nathuram, who used to sit by him, in fact next to him, much less speak with him. While the other accused freely talked to each other exchanging notes or banter, Savarkar sat there sphinx-like in silence, completely ignoring his co-accused in the dock, in an unerringly disciplined manner . . . he would look towards the Court, the witness in the witness box, the Counsels, even the spectators, but never towards the rest of the accused in the dock where he sat . . . he did not talk to me in Court during the whole of the trial, except once. He had, I thought, perhaps resolved to act in court, his defence against the charge of conspiracy with Nathuram or with any of the accused and, in fact, to perform his role demonstratively, even with respect to the counsels of the other accused!

The charge sheet was read out to all of them and preliminary formalities completed before adjourning the case to 3 June. During this brief hearing, Nathuram complained, speaking in fluent English, about being treated as C-class prisoners and being denied even water for washing for several days. His accomplices affirmed the charge, except Badge who seemed to have won himself favours and comforts by turning approver. On Badge’s role and appearance in the court proceedings, P.L. Inamdar writes an interesting description:

Badge was a short statured, bespectacled man with long hair and a beard . . . he had the smile of a wily man and the evasive gaze of a shifty creature in his eyes. He was quick witted and knew fairly well when to take shelter behind humour or ignorance. At the Red Fort Court, Badge exhibited, I think, all the mannerisms of a trained witness, like parrying a question with an irrelevant answer; seeking inspiration by looking at the ceiling; delaying his answer by wiping his mouth; glancing questioningly at the Prosecution; shifting his legs or moving the folds of his dress in apparently meaningless ways; but never failing to wear a confident smile and answering smartly and in an assertive tone when the question asked of him was an expected one. One of my colleagues asked Badge if the person he was referring to, was a lean man or a plump man. Badge looked at the ceiling for a moment and then pat came the reply, ‘A fat one . . .as fat as your goodself!’ to the merriment of all of us but to the obvious discomfiture of the questioner. Unfortunately, Judge Atma Charan, with his insistence on only what was just ‘sufficient and necessary’ did not record anything to adequately describe the drama he was witnessing in the court.

As Inamdar states, Badge was a ‘lucky find’ for the Bombay Police. With the fury of the anti-Brahmin riots and sentiments raging in Maharashtra, Badge ‘the non-Brahmin, unearthing facts, witnesses and also material exhibits against the Brahmin accused’ made him extra special. He enjoyed the police hospitality as much as he could ‘to supply the links in the chain of the so-called evidence of conspiracy’.

On the very first day of the trial, Madanlal expressed a desire to convey something in person to Judge Atma Charan. During the subsequent hearing on 22 June, it became known that he was complaining of the special and preferential treatment that Badge was receiving from the police in the prison, both in Bombay and in Delhi.

Commenting on the primacy that Badge and his position meant for the case and the extent of police protection that he received, Inamdar states:

The whole edifice of the Mahatma Gandhi Murder case was erected on the statement of the Approver. Apart from the fact that the Approver happened to be a brother of an employee of the Police Department of the then State of Bombay, it is now (in 1976) being disclosed by the writers of Freedom at Midnight (page 368) that ‘in seventeen years (prior to 1948) Badge (the Approver) had been arrested a record 37 times on such varied charges as bank robbery to murder, aggravated assault, and a dozen arms violations . . . But Badge had been convicted only in one case, viz. ‘Cutting down trees in a protected forest in 1930 during one of Gandhi’s civil disobedience campaigns. It had earned Badge a one month jail sentence.’ Having read this, the author [Inamdar] has rubbed his hands in acute frustration for not having known or been told any of these facts before 30 July 1948 on which day the author had cross-examined Badge in Red Fort Court. The whole edifice of the case was thus a sheaf of straws but for the steel helmeted protection given to Badge and other Prosecution Witnesses during the course of the trial, and the atmosphere of terror prevalent everywhere in those days of 1948.

The actual trial began with the recording of evidence from 24 June 1948 and went on till 6 November. One hundred and forty-nine witnesses were examined (out of a listed 275) by the prosecution and their evidence ran into a whopping 720 pages. The prosecution brought on record 404 documentary and eighty material exhibits.

Thereafter, all the accused were made to record their statements from 8 to 22 November. About 106 pages of recorded statements were filed and the written statements of all the accused, except Shankar, ran into 297 pages. The defence on their part brought in 119 documentary exhibits. The hearing of the defence arguments lasted from 1 to 30 December. This was the broad summary of the trial proceedings.

Even as the prosecution proceedings were under way, advocate Inamdar received a message through Bhopatkar in the second week of September that Savarkar wished to meet him.

He had sought the court’s permission to allow Inamdar to his 12-feet-by-12-feet cell in the barracks. Inamdar accordingly went to meet the man who was hitherto a deeply venerated figure for Hindu Sangathanists across India, but now confined to this misery in a tiny cell. Looking around the cell, Inamdar saw a small cot and bed, a small table and chair, a pitcher of water and a glass, and some articles of daily use. The table was strewn with a pile of books and a large file of papers. He was sitting prepared for Inamdar’s visit and all the relevant case-related papers had been laid out on the floor, on a durrie. In a low voice, Savarkar told him:

Mr. Inamdar, I am glad to have you with me . . . I have very much liked your terse and correct expression. Your cross examination of witnesses is by far the best. Yes, all of you are working and doing your best. But you! I am really impressed by your work. I want your opinion and assistance. I hope you do not mind.

For the next three hours, Savarkar took him through the minutest case details, the corroborating evidence and exhibits and sought Inamdar’s approval and suggestions on what line of argument to make. Evidently and quite naturally, he was consumed by the worry of being drawn into the case and was restless about his acquittal. As Inamdar mentions:

He repeatedly asked me if he would be acquitted and wanted me to assure him sincerely. What I noted was that he did not ask me a single question about the case against my clients, Dr. Parchure and Gopal Godse or about any of the other accused including Nathuram, nor any question about me personally.

Savarkar seemed to be deeply mindful of his words and actions with the co-accused and did not want any more suspicion drawn on him than what had already led him to this situation.

In fact, Inamdar notes that Savarkar’s complete lack of warmth and even recognition, ‘his calculated, demonstrative, non-association with him either in court or in the Red Fort jail’ deeply hurt Nathuram who ‘yearned for a touch of Tatyarao’s [Savarkar] hand, a word of sympathy, or at least a look of compassion in the secluded confines of the cells!’

But this was not to be!

Nathuram simply did not exist in Savarkar’s scheme of things where an honourable release was the only paramount concern. Nathuram even referred to his ‘hurt feelings’ during Inamdar’s last meeting with him at the Simla High Court.