Don’t Blame the Rupee, Exports Are Hit More By Bottlenecks At Home 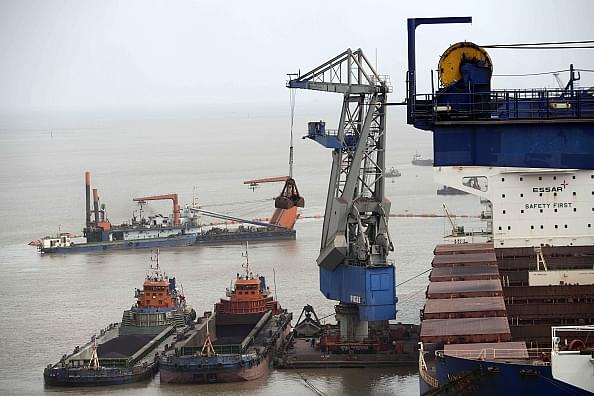 The Essar Port at Hazira near Surat.

The trade data for September released on 14 October has come as good news after a long, long time. Exports, which had been in negative territory continuously for more than a year, posted a growth of 4.62 per cent. This was the second month in this fiscal where growth was in the positive zone (it was 1.27 per cent in June).

So, now the commerce ministry is taking comfort in the rupee value. Till recently, it had been lobbying for further depreciation of the rupee saying that the exchange rate is hurting exports.

But is it? Not really, says a HSBC Global Research study, India: Churning the Ocean. The study finds that the exchange rate was only responsible for 20 per cent of the export (goods and services) decline. The main reason was domestic bottlenecks, which explained 50 per cent of the decline, followed by global growth slump (33 per cent).

Even if services exports (where the rupee matters more) are analysed separately, the report shows that the exchange rate explains only 25 per cent of the slowdown. And in the case of goods exports, the rupee accounts for only 10 per cent of the slump.

Earlier this year, chief economic advisor Arvind Subramanian had pointed out that the sag in exports was only in value terms and that there was actually some growth in volume terms. But charts in the HSBC report show a decline in both value and volume terms since 2013-14 and that India’s share in world exports has stagnated at low levels since 2011. Services exports also showed a slowdown. It also shows that other emerging market economies, notably Thailand and Mexico, have been doing better than India even in a situation of low global demand.

Clearly there is something wrong at home.

In the case of goods exports, which account for 60 per cent of total exports, domestic bottlenecks influence 60 per cent of the export performance, according to HSBC. These bottlenecks relate to physical infrastructure (roads, power, ports) as well as procedural hassles (red tape related to imports and exports). The current government has been trying to fix the latter but the benefits are still to trickle down to the grassroots level, and addressing the former is going to be a long haul. The report points out that 60 per cent of Indian exporters are small-scale producers and so cannot resort to alternatives like captive power and private approach roads.

The report suggests that sector-specific issues may have more to do with the export slump than the standard triad of bottlenecks-rupee-global economy. But it is here that the report is on rather shaky ground.

For example, it says that agricultural exports are affected by stalling of investment in irrigation as well as high import tariffs which are met with high tariffs abroad. Poor irrigation does affect production but the problem on the exports front starts after harvest. The real problem relates to non-tariff barriers in foreign markets, the knee-jerk export bans whenever domestic prices rise in some commodities as well as infrastructure issues.

Equally problematic is the explanation for the poor performance in textiles exports. The report says that cotton and pulse are grown in similar areas when the price of pulses is high, farmers tend to produce more of the food crop, leading to a shortage in cotton and therefore rising price in cotton yarns. But the problem with pulses in India has been that of low acreage because farmers preferred to grow cash crops like cotton. In fact, the Arvind Subramanian committee report on incentivising pulses production dealt with how to make farmers move away from cotton to pulses. Here too the report talks about high tariffs in India provoking high tariffs elsewhere. But tariffs in destination markets are less a problem for Indian textile exports than the fact that textile exports from other countries – Bangladesh, Vietnam, to name just two – are more competitive.

But the broader point, that more than the rupee, it is domestic environment issues as well as sector-specific issues that are hampering exports is a valid one. The central and state governments need to hunker down and address these urgently. Otherwise, India may well lose the race when world demand does pick up.