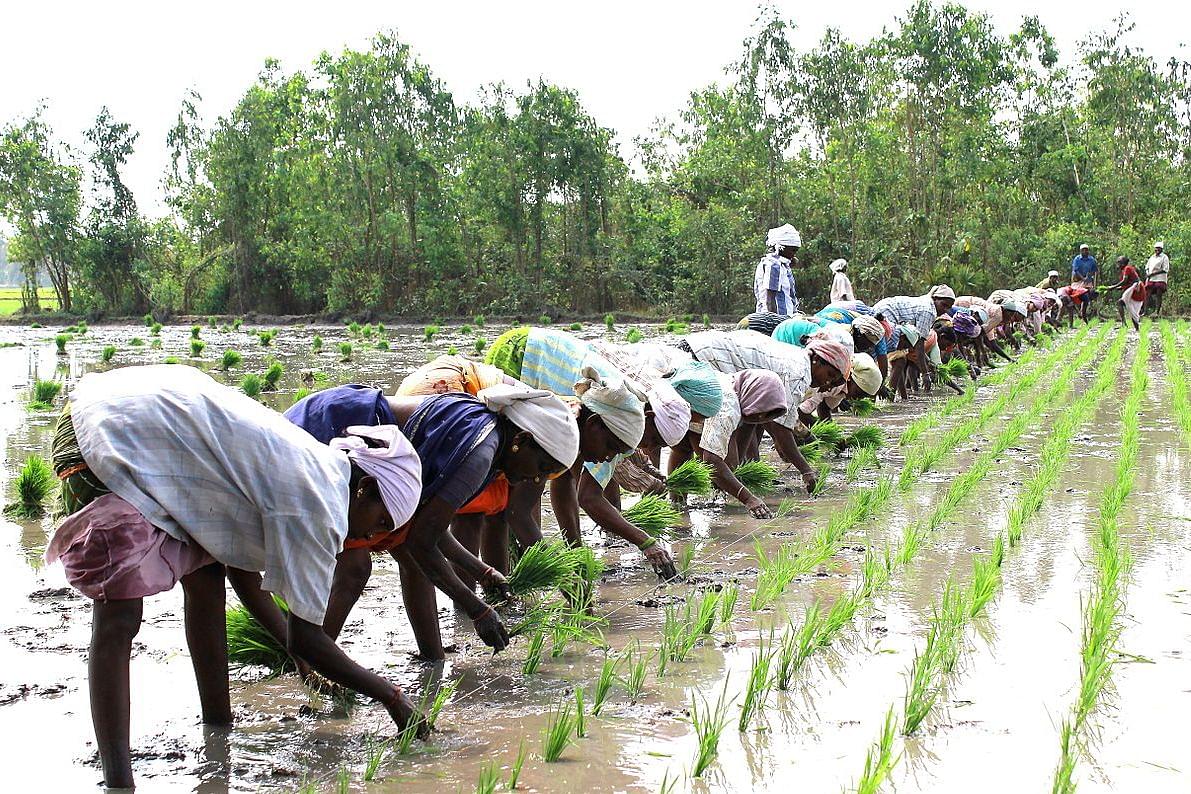 The Union Food Ministry is looking into a proposal by The Rice Exporters Association to procure paddy directly from farmers with the Centre paying the difference between the minimum support price (MSP) fixed for the crop and the 'global price' that will be paid to them.

This is akin to the Bhavantar Bhugtan Yojana (price difference payment scheme) implemented by the Shivraj Singh Chouhan government on a pilot basis in Madhya Pradesh in 2017.

The Madhya Pradesh government, in a first of its kind initiative in the country, launched the pilot scheme for eight kharif crops such as soybean, groundnut, black and white sesame (til), maize (corn), green gram (moong), black matpe (urad) and pigeon pea (arhar).

The Bhavantar scheme compensates farmers if prices of these commodities crash and this covers the price risk.

For the payment, the government did not have to procure the stock physically, which can help it save carrying and leakage costs.

Under the scheme, farmers who register will be compensated if the selling price is lower than the MSP. The amount to be paid is determined by the difference between the modal price (the rate at which most trading takes place) and the MSP.

“We have met the Food Ministry officials and presented our proposal. It is under consideration,” said B V Krishna Rao, president, The Rice Exporters Association.

If implemented, the scheme would help the government save huge financial costs and it would be a win-win for all, Rao said.

The proposal comes at a time when a section of farmers in Punjab, Haryana and western Uttar Pradesh are protesting against three agricultural legislations passed by the Union government to bring in agricultural reforms.

One of the demand of the protesters is assured MSP for their crops. This scheme will help fulfil that demand.

“We are looking to export a product that is available in surplus in the country. It will help the government tackle one of the two problems it faces — paying MSP to farmers and supply rice through the public distribution system,” The Rice Exporters Association president said.

Currently, the Food Corporation of India (FCI), which stores food grain, has stocks in excess of the Centre’s buffer norms.

It has to bear the storage expenses met by raising funds from financial institutions at interest, besides transportation and other costs, including various levies imposed by states.

As on 1 January, the FCI has to mandatorily have a storage of 5.6 million tonnes (mt) of rice and 10.8 mt as operational stock besides 2 mt of rice and 3 mt of wheat as strategic reserves to meet any food emergency such as floods or drought.

In comparison, the Centre has fixed paddy MSP at Rs 1,888 a quintal which when converted into cost of rice production is around Rs 28,250 a tonne.

Globally, Indian rice prices have gained 9 per cent in the past year, while Vietnam and Thailand have gained 46 per cent and 20 per cent respectively.

Indian rice competitiveness has helped it to widen the gap with its competitors in 2020 with even Vietnam, the world’s third-largest exporter, buying 50,000 tonnes to one lakh tonne rice from India, including 100 per cent broken ones this fiscal year.

Besides, China, the world’s largest producer, has also purchased one lakh tonne of 100 per cent broken rice at around $300 a tonne. The exports will be completed by next month.

Competitive prices along with surplus stocks helped India to export 7.02 mt of non-basmati rice during April-November of the current fiscal against 3.15 mt during the same period the previous year.

“Paddy procurement by rice exporters can be done through a scheme that will not attract the provisions of World Trade Organization (WTO) against it. The Centre can consider providing WTO-compliant transport assistance for the exports that can help pay the difference between MSP and actual rate paid to farmers,” Rao said.

To start with, The Rice Exporters Association will encourage rice millers to buy paddy at MSP from farmers in Telangana and convert it to rice for the exporters if its proposal is implemented.

The millers will pay the MSP to farmers and the Centre will monitor the scheme’s execution with the miller or exporter being given the difference between the MSP and global market price.

“We would like to start the scheme in this March itself when rabi rice crop begins arriving,” Rao said.

“Private trade should have the option of buying agricultural produce from farmers at MSP. The rice exporters’ proposal is worth considering. Actually, the state government should consider this taking into consideration the local requirements,” said P Chengal Reddy, chief adviser, Confederation of Indian Farmers Association (CIFA).

“Such a procurement will also help farmers understand the dynamics of global rice trade,” The Rice Exporters Association president said.

“The exporters' initiative is good. The scheme should be implemented using the kisan card since any person can make a claim,” said a commodity trading expert, who did not wish to be identified.

This will help farmers taking land on lease to cultivate crops rather than the owner. “The farmer who takes the land on lease toils on the field and should be the one to get the benefits,” the expert said.

He also advocated tapping the farmer producers organisations for such schemes.

An official of a multinational, who is in charge of exports, said such a scheme to procure paddy from farmers by exporters should have a place and platform to make sellers meet buyers.

“The government should be present on such a platform as an arbitrator,” the official said, on condition of anonymity.

The official also pointed out that the current MSP system has only benefitted farmers of Punjab, Haryana and western Uttar Pradesh.

“Not even 30 per cent of the rice procured by FCI is lifted by the states. This is because Punjab, Haryana and western Uttar Pradesh farmers grow Parmal variety rice that is not consumed in other parts of the country,” he said.

The Parmal variety rice is being exported because of this and the Centre should consider promoting it as a special product, the official added.

Reddy said that the Centre should assess the requirement of food grains for buffer stocks, below poverty line people's needs, and for sale through the public distribution system.

“The rest of the quantity produced in the country should find an alternative marketing sytem,” he said, calling for a change in the FCI system.

“We need to evolve a new market system particularly with consumption of rice declining. Food procurement has to be re-oriented in the next three to five years,” said Reddy.

The Rice Exporters Association president said that the Centre could encourage those with good infrastructure to procure.

This will benefit all the stakeholders and also result in Indian rice fetching a better price in the global market.