Why Foreign Aid Is Not Good Enough To Uplift Poorer Nations 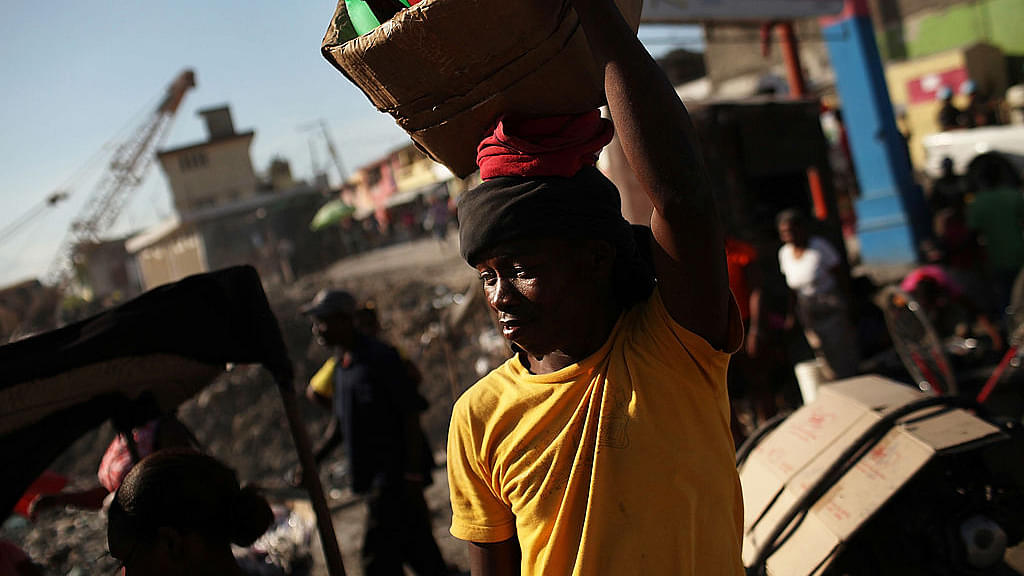 A man walks with merchandise he is trying to sell in Port-au-Prince, Haiti. Photo credit: Spencer Platt/GettyImages

At the start of the year, I argued that capitalism was the way to get more growth in poor nations.

…there’s a big difference between good intentions and good results. If you examine the evidence, it turns out that redistribution from rich nations to poor nations is just as counterproductive as redistribution within a society.

But don’t believe me. Professor William Easterly of NYU spent many years at the World Bank working on issues relating to economic development and he’s written entire books on the failure of foreign aid.

The West’s efforts… have been even less successful at goals such as promoting rapid economic growth, changes in government economic policy to facilitate markets, or promotion of honest and democratic government. The evidence is stark: $568 billion spent on aid to Africa, and yet the typical African country no richer today than 40 years ago. Dozens of “structural adjustment” loans (aid loans conditional on policy reforms) made to Africa, the former Soviet Union, and Latin America, only to see the failure of both policy reform and economic growth. The evidence suggests that aid results in less democratic and honest government, not more. …Economic development happens, not through aid, but through the homegrown efforts of entrepreneurs and social and political reformers. While the West was agonising over a few tens of billion dollars in aid, the citizens of India and China raised their own incomes by $715 billion by their own efforts in free markets.

One of the best critiques of foreign aid was written by an Indian back in 1972. The late Minoo Masani, who began his political career as a believe in socialism, learned through experience that markets work better than handouts-

…government-to-government aid distorts the international division of labour. It comes in the way of the natural laws of the market which should decide which country should produce what. …Government-to-government loans encourage socialism, communism and Statism, concentration of power, and waste. When a government aids another government, who disburses that aid? The government of that country. Aid thus transfers economic power from the people, the industrialists, the businessmen and the people to the hands of bureaucrats and politicians. The patronage the politician can dispense increases; the politicisation of economic life goes on. So, in a very direct way, every rupee of aid given by America or any other country or the World Bank to any aided country, including India, directly strengthens the forces of Statism, socialism and communism and weakens the forces of people’s free enterprise. It also breeds irresponsibility and waste.

He makes a great point that it is private investment that produces sustainable growth, not government-to-government transfers-

Let’s look at some real-world evidence from the modern era.

In her recent Wall Street Journal column, Mary Anastasia O’Grady explains how aid has stifled the private sector in Haiti-

…why are so many Haitians still living in such dire poverty in the 21st century? Paradoxically, the answer may be tied to the way in which humanitarian aid, necessary and welcome in an emergency, easily morphs into permanent charity, which undermines local markets and spawns dependency. …The trouble is their assumption, too often, that poverty is caused by a lack of money or resources. This produces the wrong solution, one that prescribes getting as much free stuff to the target economy as possible. …The country has also been the recipient of billions of dollars in foreign-government bilateral and multilateral aid over the last quarter century. This enormous giving has created harmful distortions in the local economy because when what would otherwise be traded or produced by Haitians is given away, it drives entrepreneurs out of business.

The country was once self-sufficient in rice thanks to the work of rural peasants. That changed, according to the testimony of one development expert in the film, in the early 1980s. That’s when Haiti opened its rice market and the US began dumping subsidised grain in the country with the goal of ending hunger — and helping Arkansas rice growers with US taxpayer money. Most Haitian farmers could not compete with Uncle Sam’s generosity, and they lost their customers. …Donations of bottled water, clothing, shoes and even solar panels destroy local businesses in the same way. Just ask Jean-Ronel Noel, who co-founded the solar-panel company Enersa in his garage in the mid-2000s and expanded it to more than 60 employees. He is proud of his workforce…comes mainly from Port-au-Prince’s notorious slums. …The company was doing a robust business until the 2010 earthquake. “After the earthquake we were competing mostly against NGOs... coming with their solar panels... and giving them away for free. So what about local businessmen?” As Alex Georges, Mr Noel’s partner puts it, “The demand stopped because it’s hard to compete with free.”

And here is the problem from a national and cultural perspective-

Mr Noel zeroes in on another related problem: “Those NGOs are changing the mentality of the people. Now you have a generation with a dependency mentality.”

In other words, handouts from rich nations are destroying the social capital of Haiti.

Let’s go back to 2009 and see what Dambisa Moyo wrote about foreign aid to her home continent.

Kibera, the largest slum in Africa… is… just a few yards from… the headquarters of the United Nations’ agency for human settlements… Kibera festers in Kenya, a country that has one of the highest ratios of development workers per capita. …Giving alms to Africa remains one of the biggest ideas of our time — millions march for it, governments are judged by it, celebrities proselytise the need for it. Calls for more aid to Africa are growing louder, with advocates pushing for doubling the roughly $50 billion of international assistance that already goes to Africa each year. Yet evidence overwhelmingly demonstrates that aid to Africa has made the poor poorer, and the growth slower. The insidious aid culture has left African countries more debt-laden, more inflation-prone, more vulnerable to the vagaries of the currency markets and more unattractive to higher-quality investment. It’s increased the risk of civil conflict and unrest… Aid is an unmitigated political, economic and humanitarian disaster.

She has some very grim numbers-

…aid can provide band-aid solutions to alleviate immediate suffering, but by its very nature cannot be the platform for long-term sustainable growth. …Over the past 60 years at least $1 trillion of development-related aid has been transferred from rich countries to Africa. Yet real per-capita income today is lower than it was in the 1970s, and more than 50 per cent of the population — over 350 million people — live on less than a dollar a day, a figure that has nearly doubled in two decades. …The most obvious criticism of aid is its links to rampant corruption. Aid flows destined to help the average African end up supporting bloated bureaucracies in the form of the poor-country governments and donor-funded non-governmental organisations. …A constant stream of “free” money is a perfect way to keep an inefficient or simply bad government in power.

If foreign aid money was “merely” wasted, that would be a bad outcome.

But that’s the optimistic version of the story.

In reality, the evidence suggests that these handouts actually subsidise bad policy in the developing world.

None of this would surprise the late Peter Bauer.

Lord Bauer was famous for observing that “government-to-government transfers... are an excellent method for transferring money from poor people in rich countries to rich people in poor countries.”

That’s good, if you happen to be a third world kleptocrat and you have a nice bank account filled with stolen funds in New York.

But if you’re a poor person in a poor country, you’re the one victimised by a bigger government that’s riddled with more corruption.

Amazingly, many western politicians accept corruption as the price of giving away money.

But this brings me back to where we started. If foreign aid achieved good results, then there would be a utilitarian case for accepting a degree of waste and corruption.

But since the evidence shows that these programmes lead to slower growth and less prosperity, it’s a lose-lose-lose situation.

Here’s a video trailer for a great documentary on how foreign aid is helpful, but only for the people in charge of the programmes.

Let’s close with something that probably should be called Bauer’s Paradox since I’m almost sure he said something making this point.

But until I find proof (maybe it was Easterly or some other scholar), we won’t attribute this sentiment to anyone in particular. We’ll simply go with a rather anodyne title.

The foreign aid paradox makes a critical point. The poor nations that have become rich nations in recent decades did not rely on handouts and redistribution.

Instead, they generated growth by limiting the size and scope of government while allowing markets to function.

The nations that got the most aid, however, have stayed relatively poor.

This piece was first published on the writer’s blog, and has been republished here with permission.