Chidambaram: The Cosmic Dancer and his Secrets 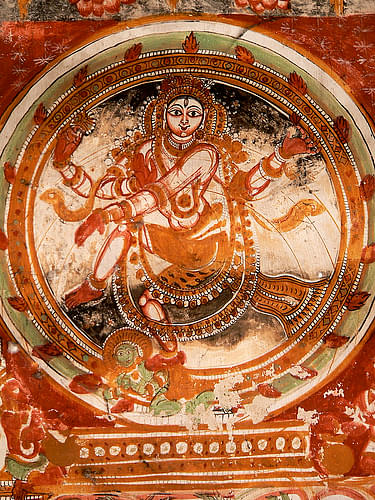 An account describing the grandeur of the Thillai Nataraja temple

The curtains sway and the emptiness whispers. The devotees sigh together, itching, craning their necks, their eyes open wide, not daring to blink, for a single glance of the dark emptiness. Some stand looking up to the dias, some, like me, stand on the stairs a few feet away, sacrificing distance for height.

The drums beat to the rhythm of the aarti, the devout prostrate on the floor, the priests sing in a cacophony of sound with the drumbeats and the brass bells, their wide plates full of heady smells of jasmine and camphor. I crane my neck with all others, together now, our oh-so-important individual identities slipping away in the dark cold shadows that lie all around us.

There are some who will tell you confidently that the Chidambaram rahasyam is a story of a gender duel. ‘Once Parvati challenged Shiva to a dance duel,’ said one rather smug looking fellow, ‘One by one they danced, Shiva did one step, Parvati followed it up perfectly.Each was more beautiful than the other, swaying to the music, harmony themselves. Then Shiva did a trick, he lifted his left foot towards the sky in the Urdhuva Tandava posture, a male gesture which because of social codes, Parvati being a woman could not imitate. And hence Shiva won.’

There are a few sculptures of Shiva in the supposed impossible posture. But I discard the story, as a tale of upmanship men tell their wives.

Instead, another version says that not even the priests of the temple know the rahasyam or the secret. Some whisper it’s the bare truth: that god is nothing, mere akasha, or ether, behind the curtain of illusion. Vacuum, sheer space, emptiness. Some claim that it’s only holy men and saints who can see the reality. That behind that gauzy curtain, Lord Shiva himself comes to strum the dance of destruction with his consort, Parvati, invisible to the naked eyes.

For those like me, the normal ones who sway between disbelief and staunch belief, all I see is a shimmering layer of golden bilva leaves which the priests have hung behind the curtain. For how does one see ether?

‘The curtain represents maya, the illusion behind which one hides oneself,’ says the guidebook I read before. They’re simply words. They don’t account for the overwhelming emotion I feel. I sway to the beats of the aarti, belief overpowering disbelief, and decide that tonight, no matter what, I will gut my fears, those burdens all of us carry, will sacrifice them in this temple complex.

The Nataraja form shimmers with the diyas surrounding it in the dark dampness of the sanctum sanctorum. The dance signifies creation of life and its destruction after life has become unwieldy.

The circle of life, the bronze ring around the Nataraja signifies the whole cosmos. The guidebook claims that this is one of the first known temples in the country which started worshipping the Nataraja form, the dancing form of Shiva. No wonder Bharatnatyam, the dance form which is inspired Shiva’s Nataraja, still flourishes in Chidambaram.

The Thillai Nataraja temple is massive, covering an area of over 40 acres. Its dark corners and rooms are full of cosy shrines of minor gods, relevant for some, ignored by others.

The legend goes that once, long ago, before time was clocked, Shiva came strolling into the Pichavaram mangrove forest. In those days, magicians who thought that gods can be controlled with rituals and mantras, lived there. Shiva decided to test the sages and took the form of a bhikshuk, a mendicant seeking alms.

Inspite of his matted hair and his filthy attire, the sages’ wives couldn’t control their desire. Angered, the sages sent scores of serpents after the mendicant. Shiva wore them in his matted locks, neck and waist. The sages sent a fierce tiger, who Shiva skinned and wore as a skirt. Finally, the sages sent Muyalakan, the demon of arrogance and ignorance.

Shiva stepped on top of it and danced the dance of eternal bliss, in his Nataraja form and so the sages knew him. Nataraja remained behind, in his celestial dance pose, still worshipped in the Chidambaram temple today.

As you walk through its grand halls, with intricately carved balustrades and canopies, an occasional masterpiece in bronze, the damp smell clings to you, as do the shadows, always there, always with you. They are not scary, but they never become completely comfortable too. They are what they are, shadows, floating full of your fears and unknown nothings. Things you don’t really understand, things beyond the rational.