Ashoka, The Not So Great 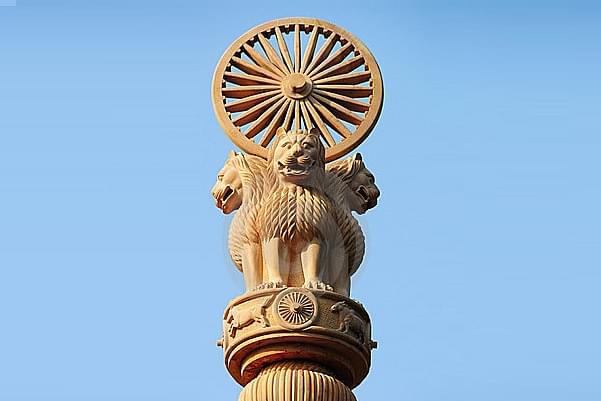 Ashoka is commonly eulogized in Indian history textbooks as a great emperor and a pacifist. A current television serial is adding to the legend. The problem is that this is all based on very thin evidence and, even a little bit of probing, suggests a very different story.

In 274BC, Bindusara suddenly fell ill and died. The crown prince Sushima was away fending off incursions on the north-western frontiers and rushed back to Pataliputra, the royal capital. However, on arrival he found that Ashoka, one of his half-brothers, had taken control of the city with the help of Greek mercenaries [1]. It appears that Ashoka had Sushima killed at the eastern gates. This was followed by four years of a bloody civil war in which Ashoka seems to have killed all male rivals in his family. Buddhist texts mention that he killed ninety-nine half-brothers and only spared his full brother Tissa. Hundreds of loyalist officials were also killed. Having consolidated his power, he was finally crowned emperor in 270BC.

All accounts agree that Ashoka’s early rule was brutal and unpopular, and that he was known as “Chandashoka” or Ashoka the Cruel. In the popular imagination, however, Ashoka would invade Kalinga a few years later and, shocked by the death and destruction, would convert to Buddhism and become a pacifist. The reader will be surprised to discover that the narrative about this conversion is almost certainly false. Ashoka would invade Kalinga in 262BC whereas we know from minor rock edicts that Asoka had converted to Buddhism more than two years earlier. Even Ashoka’s eulogists like Charles Allen agree that his conversion predated the Kalinga war. Moreover, he seems to have had links with Buddhists for a decade before his conversion. The evidence suggests that his conversion to Buddhism was more to do with the politics of succession than with any regret he felt for sufferings of war.

The Mauryans likely followed Vedic court rituals (certainly many of their top officials were Brahmins) but had eclectic religious affiliations in personal life. The founder of the line, Chandragupta seems to have had links to the Jains in old age while his son Bindusara seems to have been partial to a heterodox sect called the Ajivikas. This is not an unusual arrangement in the Dharmic family of religions. This eclectic approach remains alive to this day and lay followers of Dharmic religions think nothing of praying at each-other’s shrines.

It is likely that when Ashoka usurped the throne, he was opposed by family members who had links to the Jains and the Ajivikas. He may have responded by reaching out to their rivals, the Buddhists, for support. This may explain his later treatment of Jains and Ajivikas. The power struggle may even explain his invasion of Kalinga. The mainstream view is that Kalinga was an independent kingdom that was invaded by Ashoka but there is some reason to believe that it was either a rebellious province or a vassal that was no longer trusted.

We know that the Nandas, who preceeded the Mauryas, had already conquered Kalinga and, therefore, it is likely that it became part of the Mauryan empire when Chandragupta took over the Nanda kingdom. In any case, it seems odd that a large and expansionist empire like that of the Mauryas would have tolerated an independent state so close to its capital Pataliputra and its main port at Tamralipti. In other words, Kalinga would not have been an entirely independent kingdom under Bindusara – it was either a province or a close vassal. Something obviously changed during the early years of Ashoka’s reign and my guess is that it had either sided with Ashoka’s rivals during the battle for succession and/or declared itself independent in the confusion.

Whatever the real reasons for the attracting Ashoka’s ire, a large Mauryan army marched into Kalinga around 262BC. The Kalingans never had a chance. Ashoka’s own inscriptions tell us that a 100,000 died in the war and an even larger number died from wounds and hunger. A further 150,000 were taken away as captives.

According to the official narrative, Ashoka was horrified by his own brutality and became a Buddhist and a pacifist. However, as we have seen, he was already a practicing Buddhist when he invaded Kalinga. Moreover, from what we know of his early rule, he was hardly a man to be easily shocked by the sight of blood. The main evidence of his repentance comes from his own inscriptions. However, it is very curious that this “regret” is mentioned only in locations far away from Odisha (such as in Shahbazgarhi in north-western Pakistan). None of the inscriptions in Odisha express any remorse; any hint of regret is deliberately left out.

Surely, if Ashoka was genuinely remorseful, he would have bothered to apologize to the people whom he had wronged. Far from it, he does not even offer to free the captives. Even the inscriptions where he expresses regret include a clear threat of violence against other groups like the forest tribes who are unequivocally “told of the power to punish them that Devanampriya possesses in spite of his repentance, in order that they may be ashamed of their crimes and may not be killed”[2]. This is no pacifist.

It appears that Ashoka was using his inscriptions as a tool of political propaganda to counter his reputation for cruelty. As with the words of any politician, this does not mean he changed his behavior. Indeed, given that several of his inscriptions are deliberately placed in locations that are difficult to reach, it is quite possible that some of the propaganda was meant for us rather than his contemporaries. The Pali text Ashoka-vadana, moreover, tells us of more acts of genocide perpetrated by the emperor many years after he supposedly turned pacifist [3]. These were directed particularly at followers of the Jain and Ajivika sects; by all accounts he avoided conflicts with mainstream Hindus and was respectful towards Brahmins. The Ashokavadana clearly tells us how an enraged Ashoka had 18,000 Ajivikas in Bengal put to death in a single episode. This is the first known instance of large-scale religious persecution in Indian history and sadly, would not be the last.

This is not the only incident mentioned in the text. A Jain devotee was found in Pataliputra drawing a picture showing Buddha bowing to a Jain tirthankara. Ashoka ordered him and his family to be locked inside their home and for the building to set alight. He then ordered that he would pay a gold coin in exchange for every decapitated head of a Jain. The carnage only ended when someone mistakenly killed his only surviving brother, the Buddhist monk Vitashoka (also called Tissa). The story suggests frightening parallels with modern-day fundamentalists who kill cartoonists whom they accuse of insulting their religion.

Supporters of Ashoka will claim that these acts of genocide are untrue and that they were inserted into the story by fundamentalist Buddhist writers in much later times. This is indeed a possibility but let me remind readers that my alternative narrative is based on exactly the same texts and inscriptions used to praise the emperor. Perhaps the same skepticism should be evenly applied to all the evidence and not just to portions of the text that do not suit the mainstream narrative.

In addition to the evidence of his continued cruelty, we also have proof that he was not a successful administrator. In his later years, an increasingly unwell Ashoka watched his empire disintegrate from rebellion, internal family squabbles and fiscal stress. While he was still alive, the empire had probably lost some of the north-western territories that had been acquired from Seleucus. Within a few years of Ashoka’s death in 232BC, the Satvahanas had taken over most of the territories in southern India and Kalinga had seceded.

As one can see, Ashoka does not look like such a great king on closer inspection but as a cruel and unpopular usurper who presided over the disintegration of a large and well-functioning empire. This fits with the fact that he is not remembered as a great monarch in the Indian tradition but in hagiographic Buddhist texts written in countries that did not experience his reign. He was “rediscovered” in the 19th century by colonial era orientalists like James Princep. His elevation to being “Ashoka the Great” is an even more recent and is the result of political developments of the first half of the twentieth century.

When it became clear that it was only a matter of time before India would become free of British rule, some leaders of the freedom movement such as Jawarharlal Nehru decided to create a lineage for their socialist leanings. The problem was that India’s ancient political texts did not easily lend themselves to this. For instance, the Arthashastra, the treatise written by Chandragupta’s mentor Chanakya, advocates the main role of the State as ensuring defense, internal security and the rule-of-law; a strong but limited state. It is clearly not a manifesto for the weak but all-pervasive Nehruvian state.

This is when the emerging class of socialist Indian politicians stumbled upon Ashoka’s inscriptions. Ashoka clearly speaks of government intervention in the day-to-day lives of his subjects. Indeed, he literally speaks of a nanny State in one of his inscriptions: “Just as a person feels confident having entrusted his child to an expert nurse thinking ‘the nurse will keep my child well’; even so the Rajjukas have been appointed by me for the welfare and happiness of the people…..”. [4]

After independence, academic historians were encouraged to further build up the legend of Ashoka the Great in order to provide a lineage to Nehru’s socialist project and inconvenient evidence about him was simply swept under the carpet. However, a post-socialist reading of Ashoka’s inscriptions gives us a very different view of his supposedly welfarist policies. For instance, he created a large cadre of “dhamma mahamatas” who were supposed to ensure that all subjects adhered to a code of conduct, including several stipulations on what people should eat. We have a modern term for such officials – religious police. It is no surprise that Ashoka’s empire collapsed around him.

Western writers like Charles Allen have patronizingly written how ancient Indians were somehow foolish to have had little regard for a great king such as Ashoka. On a closer look, it appears that they knew what they were doing. I’m much more concerned that modern Indians have been so easily taken in by a narrative that is almost certainly false.

(Sanjeev Sanyal is an economist, urban theorist and the best-selling author of Land of the Seven Rivers: A Brief History of India’s Geography)

3The Legend of King Asoka: The Study and Translation of Asoka-vadana, by John Strong, Princeton University Press 2003