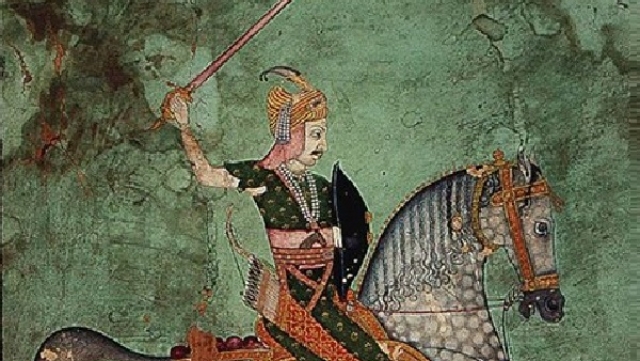 Some history is told and some torn from the vast pages of time. Untold or lesser told, or simply forgotten by the people it is meant for. Pushed away from the essential wear and tear of telling and retelling, and missing from the popular narrative, deleted, it gasps for life. Yet, it manages to stay alive on the blood and breath of the great struggles and sacrifices of warriors and leaders who have shaped it. It manages to find way, through pin holes of light and language, ink and words. It finds tellers. It finds retellers. It finds sutradhars. Maratha history has gone through a similar battle. Herumb Khot is determined to not only talk what is “deleted” from Maratha, but also retell. IAMBuddha Foundation & Indic Book Club are pleased to announce Indic Talk by Herumb Khot.

Who was responsible for a fractured narrative when it came to the history of Maharashtra? Herumb says, “First, the Mughals, then the Europeans, and not to forget, some of our elected leaders who believe they are here to rule us. Pick up any history text book and you will see the ratio of triumphs to defeats is heavily skewed against us Indians.”

The resulting imbalance, according to Herumb: “The few communities that could stand up and repel the invaders were mentally defeated and broken, so badly, that their pride, history and lineage were maligned. These implanted rifts still continue to run deep when people are still fighting among themselves on caste and religion rather than take collective national pride.”

How does it become painful? “Deleted is painful because all of us have been fed a staple diet of how we were only the oppressed class who have been enslaved across generations from the eleventh century to 1947. The amazing history of the sheer resilience, the strength and supreme sacrifice of the people of our country to stand up against the powerful aggressors across the centuries, has been conveniently deleted.”

Maratha history is a goldmine of stories of courage. When was the first time Herumb stumbled upon a part missing from the narrative and popular narrative of Maratha history? He says, “The first day I started my research for Peshwa Bajirao. Then came Bajirao Mastani -- the film that made it seem like the pinnacle of Bajirao's achievements was Mastani. I read the introduction in a book on Bajirao's life and realised how facts were twisted to make one of the world's supreme generals look like a love struck puppy, maligning his stellar achievements.”

Herumb tells more. “The accounts of 'patriotic' Britishers like Kincaid that mocked and denigrated our heroes, were freely circulated and allowed to pollute the education system to gently erase the glorious past. Chatrapati Shivaji Maharaj was called a 'mountain rat’. How worse could it get? It is only after their departure from India that the true picture started trickling out. Post Independence, some political parties chose to continue with this propaganda as they wanted to ‘rule’ over us. The true history continues to be ignored, branded these days, by the so called liberals, as ‘right wing literature’ and is treated as a taboo.”

There are many aspects of Maratha history still distant and forgotten.

We need to know more on “Chatrapati Sambhaji Raje and his fighting back the Moghuls and the Portuguese with a small army”. We do not. Herumb says, “That assumption that India was a peaceful country and none of the kings were expansionists is a load of hogwash. Sorry, dude, we were aggressors and very good at that too. Vikramaditya, Chatrapati Shivaji Maharaj and Bajirao, not only did they reclaim their conquered motherland but took pride in extending their boundaries. By 1761, the Marathas were collecting Chauth from nearly the whole of Hindustan.”

“Slap us on one cheek and we will offer the other.” Give us history of the great Maratha warriors, their courage, grit, valour and intelligence, and we will make the precious and powerful stories vanish from the lofty pages of history, and push them into the dark dungeons of neglect. Or, as Herumb puts it, “Ask us how we can remember our great leaders like Balgangadhar Tilak and Veer Savarkar and we would give them a fleeting mention in books that doesn’t befit their struggle, sacrifice and bravery.” Another cheek. Let us step back more.

We need to know more on the bravery of Maharani Tarabai “when she single-handedly destroyed Aurangzeb.” We do not. How is the narrative lost in history books? “The most important source of history is what is taught in school. Check out any history book in use currently in Maharashtra. Sadly, you will find that the valour of the Marathas finds mention is just a page or two. Way more footage is given to the Mughals, the kindness of Akbar; Aurangzeb, the European rulers, and not to forget, the greatness of the Britishers,” he adds.

We need to know more on the battle of Palkhed, crafted by the sheer brilliance of Bajirao -- the masterpiece of strategic mobility. We do not. Herumb adds, “Chattrapati Sambhaji Raje, Maharani Tarabai, Peshwa Bajirao, Chimmaji Appa, Dhanajirao jadhav, Baji Prabhu -- the list could just go on.”

We need to know more on how, in 1757, the Marathas helped the Sikh in the battle of Sirhind to destroy the Afghan marauders. “Later, they also helped in cleansing the Golden Temple in Amritsar from the Pathans who had desecrated it.” We need to know more. He echoes, “Are we so deficient of heroes that we need to look towards the west for our inspiration? People rave about Sun Tzu and art of war. Have you heard about Ganimi Kava, the art of the Maratha guerilla warfare that was way more practical, and succeeded in bringing down the mighty Mughals, British, Portuguese and the Siddis to their knees in the eighteenth century?”

A bit about the speaker’s interest in history. “Strangely enough, while growing up, history was never my favorite subject. History was remotely not on my horizon while studying computer engineering, and later, my profession in fashion photography, films, ads and TV,” says Herumb, who has spent years researching on the real Maratha history.

History found another pinhole of light and language. Work on the ad campaign on Maharashtra tourism made Herumb aware of Maratha history. Maharashtra’s architectural heritage began a conversation. “The sheer brilliance of the forts, the stories of the Maratha warriors had moved me then.” The paradigm shift came with a project a few years later. “I started working on the TV show Peshwa Bajirao for Sony TV. I was drawn into the world of the true history of my people. The more I progressed, the more I wanted to know. It occupies most of my time now.”

What led to the “deletion” and who was afraid to tell and reveal? “It was a classic example of psychological warfare off course. The Britishers were good at colonisation. Impose a language, divide and rule on the basis of caste and religion, show the people they were ignorant imbeciles who needed uplifting -- the domination was complete. The best way to break people was to take away their hope and pride. How could the British, who were just a tiny fraction, rule over millions with sheer ruthlessness over such a vast country? It was more of a mental than the physical domination,” he adds.

Steal the ink, or spill it on ink, for decades. Herumb adds, “Did you know that none of the Marathi books giving the true account of the Maratha heroes were allowed to print their books in late nineteenth or early twentieth century? The works of brilliant historians like GS Sardesai were never allowed to see the light of the day till mid twentieth century.”

What is the best way to delete the deletion of history from our books, narratives and telling of history and stories of bravery? “Only one way -- awareness through a popular medium. Why should we depend on the government to change syllabus etc. It is up to us now to bring the glorious past into the limelight.”

There is hope. There are tellers and re-tellers. He adds, “There are some fabulous orators who are spreading it by word of mouth, but we need to really go next generation. I am shooting a web series that amalgamates my two passions -- motorcycling and history.”

Herumb is currently working on a book on the management principles of the Marathas and how Ganimi Kava was used effectively by Chatrapati Shivaji Maharaj and Bajirao.

“We are made to believe that we are peaceful people who are only fit to be 'RULED’.” We need to know more on the pinnacle of Maratha success. “The fruition of Chatrapati Shivaji Maharaj's dream, when in 1758, the saffron Maratha flag unfurled proudly over the Attock fort,” adds Herumb.