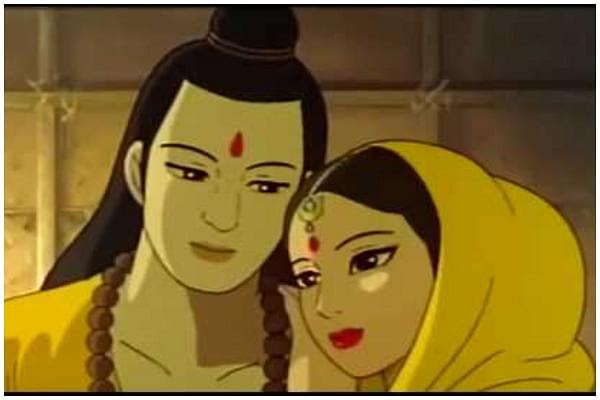 A still from the movie

Finding a gentle tortoise, an octopus, and a deer helping organise Ram's march towards Lanka in a depiction of Ramayana would be less likely had Japanese director and producer Yugo Sako left the job of adapting the great epic for anyone else.

There were possibilities Sako saw arising from his reading of the Ramayana, which no one did - before him or since.

By giving India Ramayana: The Legend of Prince Rama, Sako - a Buddhist, gave India an adaptation that would speak with people across generations.

(The army of Rama is building the bridge,
No one in the universe can save Ravan)

The few seconds in this song, where the gentle fish from the sea are shown tumbling over stones to push them, and an octopus shown holding one stone, and the inching ahead of the bridge - as monkeys build the Rama Setu - subtly represent the span of years Sako read and knew the Ramayana through.

It has been nearly three decades since the film came and not one retelling of the Ramayana for children, or in the performing arts, has been able to revisit the epic via the celebration of environment, flora and fauna.

A squirrel is shown seated on Ram's shoulders when he receives the news of the death of his father Dashrath from Bharat. None, not even Lakshman, or Sita, is shown in a direct physical contact with the avatar of Vishnu during this poignant moment.

The scene where Sita's beloved deer tries to free her from Ravana's grip at the Lakshman Rekha - that's Sako's tribute to nature.

Ramayana: The Legend of Prince Rama, retells the story of Rama using nearly a lakh hand drawn cells for material. Each cell is a confluence of Indian drawing and painting and Japanese comic, style and animation technique of Manga.

The film was shown on Cartoon Network back in the 1990s and exists on YouTube even today. Kids growing up in the 1990s still go back to it.

For children, the film is a great starting point for understanding the classicism involved in depicting Ramayana and Ram's story throughout India, the East and the South East.

For adults, it is a great beginning to go back to the text.

On India's contemporary culture calendar, it remains as one of the greatest Indo-Japanese cross-culture collaborations and the most long lasting one.

The human value of the episode of the building of the Rama Setu is particularly penetrating. It makes you wonder if any Indian on his own can attempt, again, or could have attempted back then, something so simple and propelling to last in the viewer's memory.

The Rama Setu episode bridges the two phases of the Ramayana in Sako's work.

The first sees Rama as the son, husband and friend. The second - Rama as the thinking Kshatriya fighting for dharma and the slayer of Ravana.

Valmiki from the East

In the 1990s, Sako, who had read Valmiki's Ramayana and had done several readings of other versions of the epic in Japanese, decided to work on an adaptation.

His reverence for Rama made him think about the sensitivity in portrayal. He wanted to tread the story line. He wanted to be in harmony with the bhava and he thought that it would be appropriate to depict Rama in animation and not in a human face.

Sako's urge of adapting the Ramayana led him to an Indian animator. He was the Mumbai-based legendary animation artiste Ram Mohan.

Ramayana: The Legend of Prince Rama was a collaboration between Sako and Mohan.

Sako roped in 450 artists, Japanese and Indian studios, and started work on a retelling. He wanted to get the details right. He consulted many experts in India.

This continued interaction perhaps gave him the confidence to present the crucial perspectives on why Sita refused to return with Hanuman, on why Rama had second thoughts about attacking Ravan; on why Rama chose to send Angad to Ravana and finally, on how Ram's resolve to go ahead with the awaited action becomes solid.

Vanraj Bhatia, noted Mumbai-based music director, who has contributed to several stellar productions, made the work of Sako and Mohan even more memorable and unforgettable.

Mohan passed away this month. And Bhatia was in the news recently for his ill health and for leading a solitary life in Mumbai. Their work with Sako remains one of the tallest examples of Japanese-Indo collaboration and amongst the finest tributes to the Ramayana.

Sako’s reading of the epic was layered. This film was perhaps his way of connecting with the Indic understanding of religiosity with spirituality. The scene where Rama sprints to attack Ravana, he seems to appear from a worrying Sita's own thought and meditation for his victory.

Sako and Mohan, along with the hundreds of other artistes pulled out the unseen for the paper and screen.

For instance, the use of dimensions, as shown in the regrowing and reappearing of Ravana's head on the battlefield; the use of inner spaces of Lanka, where Ravana is shown discussing the battle and the outcomes after each loss; the use of hollows and cavities of caves.

For instance, that extraordinary use of silence in the dual between Indrajit and Lakshman. For instance, the war vehicles and their spearing into clouds. Sako's reading of the Ramayana drove him close to the closest depiction of these elements.

As the marching song plays in the background, Ram's vanara sena is shown in action, but shown assisting it are other animals. Stones being lifted with the help of a crane - elephants moving round and round, powering the pulley system. A monkey sitting on a bar on this innovative crane supervises the show. Then, a tortoise carrying a stone tied to his shell.

The deer, they pull the cart, and monkeys push from behind to make their job easier. Parakeets, too, carry stones. And finally, the vanaras discover the power of scribbling ‘Shri Ram’ on stones and get lessons in buoyancy right there.

The chorus sings these two lines. The foreground is the army of Rama finally marching on the Rama Setu. And watching them marching away are animals who helped in building the bridge. Animation director Kazuyuki Kobayashi's work peaks endearingly in this shot.

There are other scenes in this brilliant film that must be preserved in stills for generations to know how a Japanese filmmaker poured his heart into a project on the Ramayana.

For instance: The scene where Sumantra departs from the exile-bound Ram, Lakshaman and Sita.

Sumantra is visualised from Ram's boat.

Lakshman doesn't even turn around.

He stands ram rod straight at the edge of the boat.

Their boat, then, is visualised from the sky, floating on the wide, wide river.

For instance: the scene of the last rites of the vanaras taking place on the sands after Kumbha and Nikumbha attack them. It is visualised from the ocean.

For instance: the scene where the vanaras shout that Rama flying on Hanuman to take control of Ravana seems like Bhagwan Vishnu flying on Garuda.

According to accounts and reports, Sako had first visited India in the 1970s, and he continued to visit during the 1980s, when he was working on a documentary on the archeological excavations near Ayodhya. He was documenting it in his work The Ramayan Relics. Dr B B Lal's work was of immense interest to Sako.

For his part, Mohan helped Sako in putting his own interpretation to the drawing board. The Indian line in drawing met Japanese form to depict the divine-human.

This is clear in each frame of the Ramayana story that Sako and Mohan have woven scene after scene.

According to accounts available on the Internet, the film could have lived the great American release dream. Co-producer Krishna Shah did not bend to a certain studio's idea of deviating from the story line of the Ramayana.

The basic idea from the studio was to look at it as a heroic adventure story with major deviations.

Shah did not agree. Sako's work remained within the hardbound antiquity of sacred text.

The timing of production and release clashed with the Rama Janmabhoomi movement. Sections of "liberal" media (not liberal in the real sense) leave no opportunity to say that Hindus stopped Sako's work from reaching Indian theatres.

For them Sako's work, largely, is important because it has inspired work in the West, and not so much because Sako went on to present his work in difficult times.

What these sections of media seem to forget is that emotions were on a high at that time, and the reasons owing to which Sako's collaborative work, its production and release faced hurdles were mostly surrounding the clashing of events and timing.

What they call "Hindutva forces" "making peace" with Sako's work is not "making peace" but a humble acceptance of a great work produced and presented by keeping the sacred in the Ramayana sacrosanct.

Ram's Ayodhya now sees the Deepotsava return to it and witnesses the performance of Ramlila from the nations in the East and South East.

Japan is yet to reappear in this renewed celebration of the Ramayana.

Until another moving Japanese retelling appears before the Indian audience, Sako's work will continue to cement the sturdy cultural bridge between India and Japan.

Sako breathed his last in 2012. 2019 is not too late to honour his immensely valuable contribution.