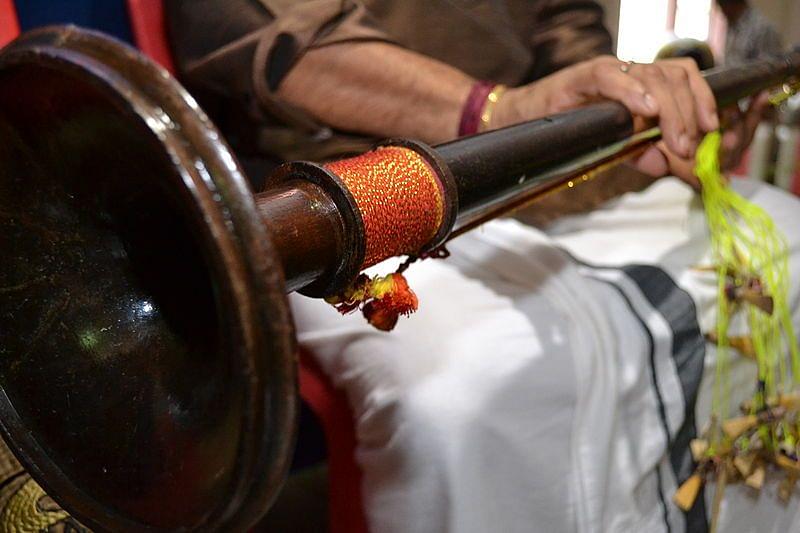 Let me share some music with you. Listen to the album and think whether you would like to listen to this artiste again.

I will tell you what happened some five or six years ago. At Chennai's Music Academy, after a 4 pm concert by a leading Chennai artist, there was a concert by Sreevalsan Menon. The Chennai artist had been below par.

Sreevalsan Menon came across as a breath of fresh air. Attending his performance at that time, there were nearly 30 people at the Madras Music Academy auditorium. I felt sad. Unfortunately, the trend is repeating year after year.

Perhaps, in Tamil Nadu, artistes from Andhra Pradesh do a better job of getting accepted than Kerala artists. K J Yesudas is an exception. In his case, playback singing was his calling.

This year, in December 2018 during the Margazhi music festival, I listened to Sanjay Subrahmanyam at the music academy. Sanjay has been conferred Sangita Kalanidhi by the academy. He is extremely hard working. God bless him for his dedication and love of Tamil compositions.

The concert showcased his talent and immense creativity, no doubt. He always has amazing support from S Varadarajan on the violin. He really embellishes Sanjay Subrahmanyam’s concerts.

But, at the end of 2.5 hours, was there a feeling of peace, happiness and contentment in my heart which good music leaves one with? There was lot of virtuosity, speed and breathless 'prayogams'. But... as one would expect, the discerning Chennai audience had emptied out of the hall. Some 30-40 of us were there, again, for Shertalai Ranganatha Sharma.

He sang in Hamsanandi, Ritigowla and his ragam, thanam and pallavi (RTP) was far soothing, innovative, with Lalitha, Bhairavi, Sree, Vagadeeswari, and the Pallavi was in praise of all the three devis.

Dr Baby Sriram, Vishnudev Namboodiri, and Chertalai Ranganatha Sharma - they are all given lukewarm welcome, at best, by the music lovers who attend concerts at the Madras Music Academy, which is the 'centre court' of classical music in Chennai.

One of the best concerts I had listened to this year was by Vishnudev Namboodiri at Bharatiya Vidya Bhavan mini hall. I was gratified that his concert at the Narada Gana Sabha was so well attended that finding a seat was difficult. It was an unticketed concert.

Of course, to their 'credit', the rasikas (fans) of the Madras Music Academy did that to Kunnakudi M Balamuralikrishna, too, on the 25 December. They emptied out of the hall largely after thronging the auditorium and spilling over for the sub-standard fare - full of gimmickry and self-praise - dished out by Ranjani - Gayatri.

I have immense admiration for their hard work and I used to be unfailingly present in their concerts up to about five-six years ago. They are now past their prime. They know it and that is why they are relying less on music but more on gimmicks.

The 'amazing discernment' and 'taste' of the rasikas who patronise the music academy, leave me speechless, unfailingly, year after year.

In December 2017, at 10 am, in Narada Gana Sabha, a young singer by name Sid Sriram was singing in an unticketed concert. There were some 30-40, may be 50 people in the auditorium. My friend and I thought he had a good voice and thought we should follow him in 2018, and left.

Come 2018, he had straightaway catapulted into stardom thanks, presumably, to some big hits in playback singing for films.

He had the prime-time slot in Narada Gana Sabha and in Parthasarathi Swami Sabha. I do not know if anyone else gave him the prime time slot.

I decided to check him out at Parthasarathi Swami Sabha on 29 December 2018.
There was a big queue and a family in front of me took a long time to figure out the most optimal seats. When the curtains opened, I was surprised to find Sri Umayalpuram Sivaraman, the doyen of South Indian classical music, accompanying this young man on the mridangam.

His voice was a bit hoarse and he was struggling. Probably, too much singing.
The volume levels were set too high for the mridangam and for the vocalist, the violinist was barely audible.

Sid Sriram - right from the beginning - was waging a war with someone, it seemed owing to the way he began singing. Each kriti sounded more like a war cry than a song or invocation for some deity.

Finally, when he sang 'Raghuvamsa Sudha' so angrily, I decided to save some time at least, having sunk the money.

I did not know whether to be disappointed with him or with the audience, who were enthusiastically 'putting' thalam and vigorously shaking their heads for a non-existent concert.

He is a bright young man and I am sure he will figure out and become a better singer in the years ahead. I am willing to bet on it, actually.

But, it is also time to sit back and reflect on what mindless adulation and lack of critical feedback and 'pandering' or wanting to be part of some popular sentiment or fashion is doing to a genuinely talented artist.

One more testimony to the 'discernment' of the Chennai rasikas.

For me, 30 December was the last day of my concert-season 2018. The previous evening, I listened to yet another brilliant discourse (combined with music) on Sri Vedanta Desikar by Dushyant Sridhar. He is a phenomenon, no doubt. I am referring to Dushyant Sridhar.

At Bharat Kalachar in T Nagar to listen to Soorya Gayatri, the young girl mentored by Kuldeep M Pai. Originally, it was billed as the unticketed event and the organisers decided to extend it by 30 minutes and make it a ticketed event.

She did not disappoint. There was no stage fright. Her vidwat shone through. She could sing like a well-trained musician with good sangatis and gamakas, etc. She rendered all the songs she had become famous for - Hanuman Chalisa, Brahmam Okate, Kurai Ondrumillai, Harivarasanam and Kaatrinile Varum Geetham.

I wanted to take a picture with vocalist, composer and teacher, Kuldeep M Pai, the man who has given us so much and taken so little in return from us. His contributions to Sanatana Dharma, to guru parampara, to music, religion, to the bhakti margam, are inestimable.

Towards the end, I was musing. I hoped that the organisers would compensate the artistes, given that the event was ticketed. Two, I was also hoping that as the young girl became a talented musician, she did not fall for the temptations of popularity. Her appeal now is her purity. As she becomes famous, older, there will be inevitably dilution of this original sincerity and purity. The questions are ones of degrees and the right balance.

After a nice concert (my second concert for the season by him) by Vishnudev Namboodiri at the Sivagami Pethachi Auditorium - poor acoustics, it was time to come back to the music academy for the final concert of the season for me by Abhishek Raghuram.

My friend wondered if we would get good seats. I told him not to worry. I was right. The hall was only about 70 per cent full. That should be taken as a contrarian indicator. If the music academy was too full, then the artiste is too popular and less likely to be aesthetically pleasing. He or she will be playing to the gallery.

So, attendance is a good contrarian indicator. I was not a fan of Abhishek Raghuram when he was young and too popular. Now, he is 33 and more mature and mellowed. To understand what I mean, see this review.

What a stupendous concert it was! Between Kapi, Saveri, Nilambari (Dikshitar's Neelayadakshi - the temple of Neelayadakshi Ambal and RTP (in Thodi, Shanmughapriya, Kambodhi - I hope I am right on this), it was beautiful and rich. Both H N Baskar and Abhishek Raghuram were the perfect foil, encouraging each other and pushing each other to greater heights. In some phases, Baskar was operating in a different zone.

I was very happy to read about N C Bharadwaj here. He is only 21 now. But, in concerts, the percussion artists were overshadowed by the vocalist and the violinist.

It is difficult for me to grade or rank the artists. Each one provides happiness in his or her own way. The concert season, for me, started on 7 December, last year, with a lovely brisk concert by Malladi Brothers at Narada Gana Sabha.

That was a very good beginning to the season. I only listened to 60 per cent of the concert by J B Shruti Sagar. I simply loved it. Sanjay Subrahmanyam’s ‘Thamizhum Naanum’ was another ‘off-the-season’ concert that happened during the season. I enjoyed only half of it due to another commitment.

Abhishek Raghuram, on 30 December, was phenomenal. How can I leave out Shertalai Ranganatha Sharma, Vishnudev Namboodiri, Ramakrishnan Murthy and Bombay Jayashri at the music academy? Aswath Narayanan has come a long way.

So, I am not going to rank artists. I salute them all.