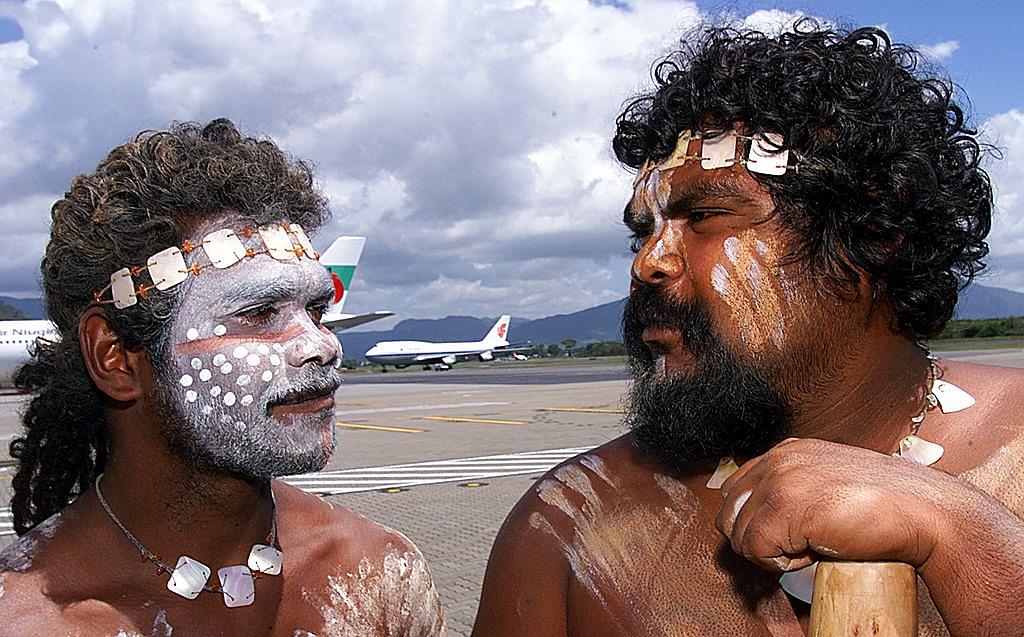 Three years back a discovery was made by geneticists that there was substantial gene flow from India to Australia just 4000 years ago and it made a change in the Aborigine life that was reflected in the archeological records. The 'substantial gene flow between the Indian populations and Australia' happened 4230 years ago and this resulted in changes in 'tool technology, food processing and appearance of dingo' according to the authors of the paper. The second wave migration from India happened 141 generations ago says the paper. Unlike the earlier migration from Africa which most probably happened along Indian coast but in what is called the deep time, this happened during the historical times, which was around 2220 BCE from India.

So this has interesting possibilities in charting a new history of India and Australia and it also has ramifications with respect to the way Hindus in Australia, as well as Indian government, relate themselves to the aborigines. Australian aborigines are today a lost tribe of India. In a way what has been discovered is a reaffirmation of a strong intuition felt by many Hindus.

Some colonial anthropologists and early explorers might have posited some superficial relations between the Australian aborigines and ancient Indians. Colonialists mainly looked for linguistic and ethnic similarities. By 1901, the Australian government had brought to end even such studies as it wanted to restrict any narrative that may allow a large scale Asian migration into Australia.

The first one to suggest forcibly the connection in the spiritual realm was Sri Chandrasekarendra Saraswathi, the Sankaracharya of Kanchi. He had asked his devotee, dancer-scholar Dr. Padma Subramaniam to search for the deep connections between Indians and Australian aborigines in the realms of culture and spirituality. In 1979, Dr. Padma Subramaniam had to go to Australia for attending the Indian Ocean Arts Festivals in Perth. When she went to seek the blessing of her Guru, Sri Chandrasekarendra Saraswathi, he asked her to visit ‘the Siva tribe’ who adorn themselves with white bands similar to Saivaites.

Dr. Padma Subrahmanyam writes that though she ‘never anticipated it’, she ‘did come across this tribe called Gagudja from the Balgo hills.’ They not only fitted the description given by her Guru, but she discovered that ‘they also had a language not far removed from Tamil.’ She was able to note ‘about 40 Tamil words in the language of this tribe.’ When Larry Gundora, Elder leader of the northern traditional Aborigines and his companions began to hum a ritual song cycle, 'an animated Padma and her Carnatic musicians joined Gundora on the floor'. Later she noted that their singing seemed to resemble a South Indian classical raga (Hamsanandi).

However when she spoke about this in public and it made a sensational news in Australia she was rebuked by an Australian anthropologist Prof. Berhnt which she observed was ‘perhaps due to their white Australian policy’. But the connection would not easily go.

In the anthology on Hindu view of nature and ecology published by Prof. Lance Nelson, (‘Purifying the Earthly Body of God: Religion and Ecology in Hindu India’, 1998), the late Indologist Dr. David Kinsley wrote extensively about the deeper parallels between Hindu traditions and Australian aboriginal spirituality. He proposed 'a model for understanding aspects of pilgrimage in Hindu India based on the phenomenon of the 'walkabout' in Austalian Aboriginal religion.' He explained:

Like the Australian traditions, Hinduism knows a Dreamtime - earlier yugas, periods when divine or heroic figures roamed the land and marked it in special ways, lending the geography its characteristic features. ... Like the Austalian traditions, most Hindu pilgrimage sites (tirthas, pithas) have stories connected with them (sthala-puranans), which pilgrims learn and sometimes recite while on pilgrimage. As in the Australian traditions, becoming spiritually awakened or mature in Hinduism may require learning the story of the land. Like Australian Aboriginal spirituality, Hindu spirituality is strongly geographical and involved learning how to read the landscape.

Physicist Fred Alan Wolf studied the spiritual cosmology of what the Australian aborigines call the ‘dreamtime’ in his work on dreams. He was also saw the ‘Hindu concept of Maya’ related to developing a cosmology based on dream.

Authors Joyce Westrip, an India-born-Australian and Peggy Holroyde who studied Hindu-Buddhist philosophy under Dr.S.Radhakrishnan, studied what they called ‘surprising history of connections between India and Australia’. They too discovered affinities not just linguistic and ethnical but spiritual and religious.

One such imagery that struck them forcefully was 'the similar use in allegory and myth of the serpent, one of the prime protective images of Hindu belief.' (p.14, Colonial Cousins, 2010). They also found a spiritual kinship between the ‘rainbow serpent’ that figures so prominently in the Aboriginal spiritual art and the protective hood of Anantha – the thousand headed serpent raised above Vishnu. "Many Indians would be very sympathetic to the way Aborigines treasure their own knowledge of truths as they see them through oral traditions," they write pointing out that the ‘Das Avatar’ concept of Vishnu and some of the spiritual drawings that the Australian Aborigine’s draw even to this day are ‘virtually interchangeable’ (p.17). They conclude that the Australian aborigines have 'spiritual lives as legitimate as India's tribal people and as sophisticated in cosmic concepts as the Hindu views- but without a written literature to study and dissect'. (p.96)

In 1979 Dr. Padma Subrahmanyam proposed that she travelled to all the aboriginal communities in Australia and interact with them, not like a Western anthropologist studying the subjects, but as a fellow artist and spiritual seeker, seeking their own culture and spiritual traditions. Such a study was not comprehended by the ‘tunnel vision’ of Western scholarship. Perhaps now time has come to take up the real vision of Sri Chandrasekarendra Saraswathi – studying with mutual respect the various human cultures to understand and celebrate the underlying spiritual oneness of all humanity.