Nobody Seems To Be Bothered About Our Heritage 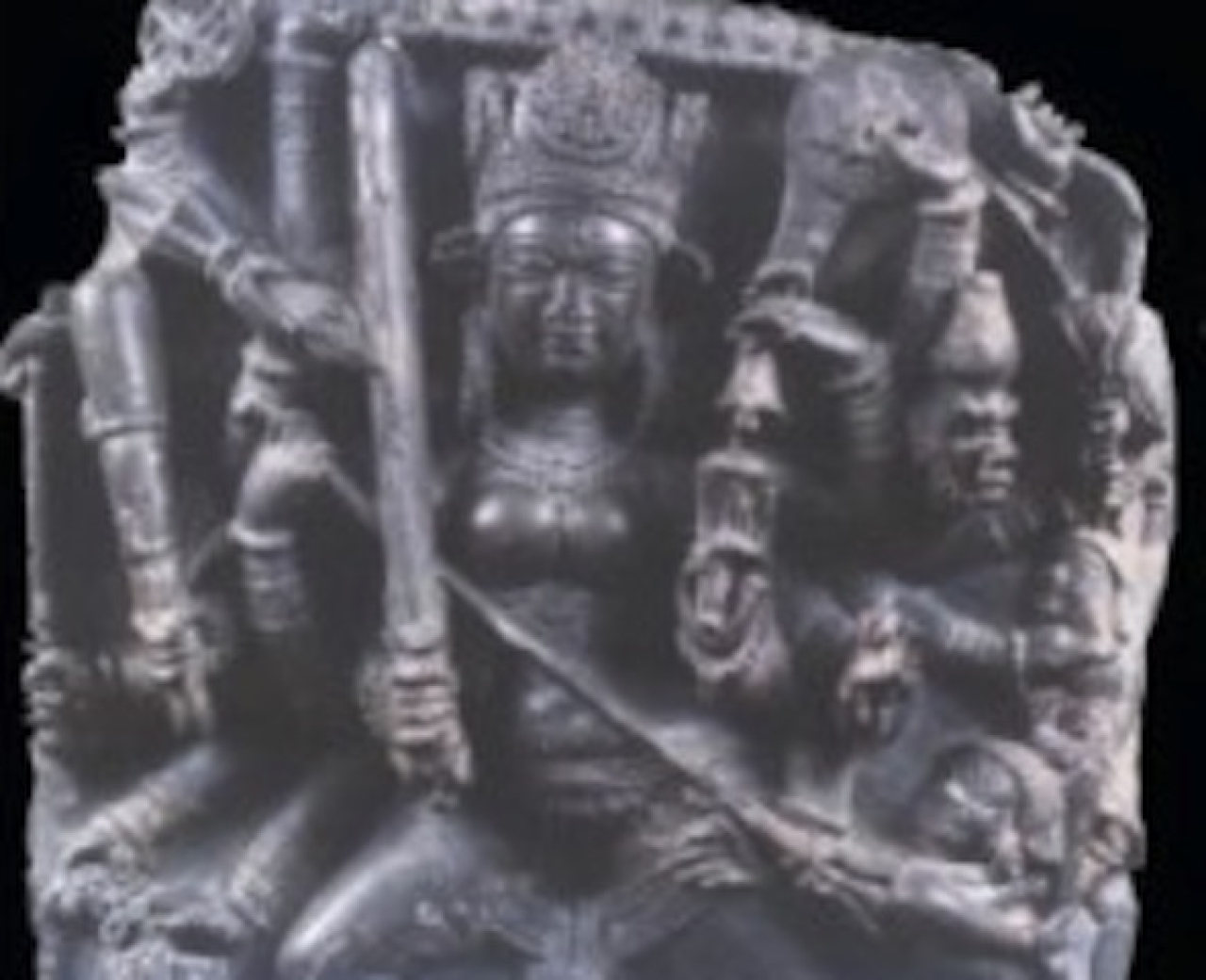 An invaluable idol of Durga was stolen from Jammu & Kashmir in the 1990s. This is an article outlining its trail and highlighting the absence of any serious attempt to retrieve it.

The governments of India and Germany are trying to cloak the return of the obviously-looted idol of the Tengpora Durga of Kashmir behind a veil of diplomacy.

That the object is linked with the now defunct Art of Past gallery of disgraced art dealer Subhash Kapoor, is by itself proof enough of it finding its way to Germany via dubious routes.

But the real story of the trail of Durga must to be known to the world – for not only does it truly portray the crooked side of the art world, it also shows how ill-prepared Indian art custodians are in dealing with such cases. 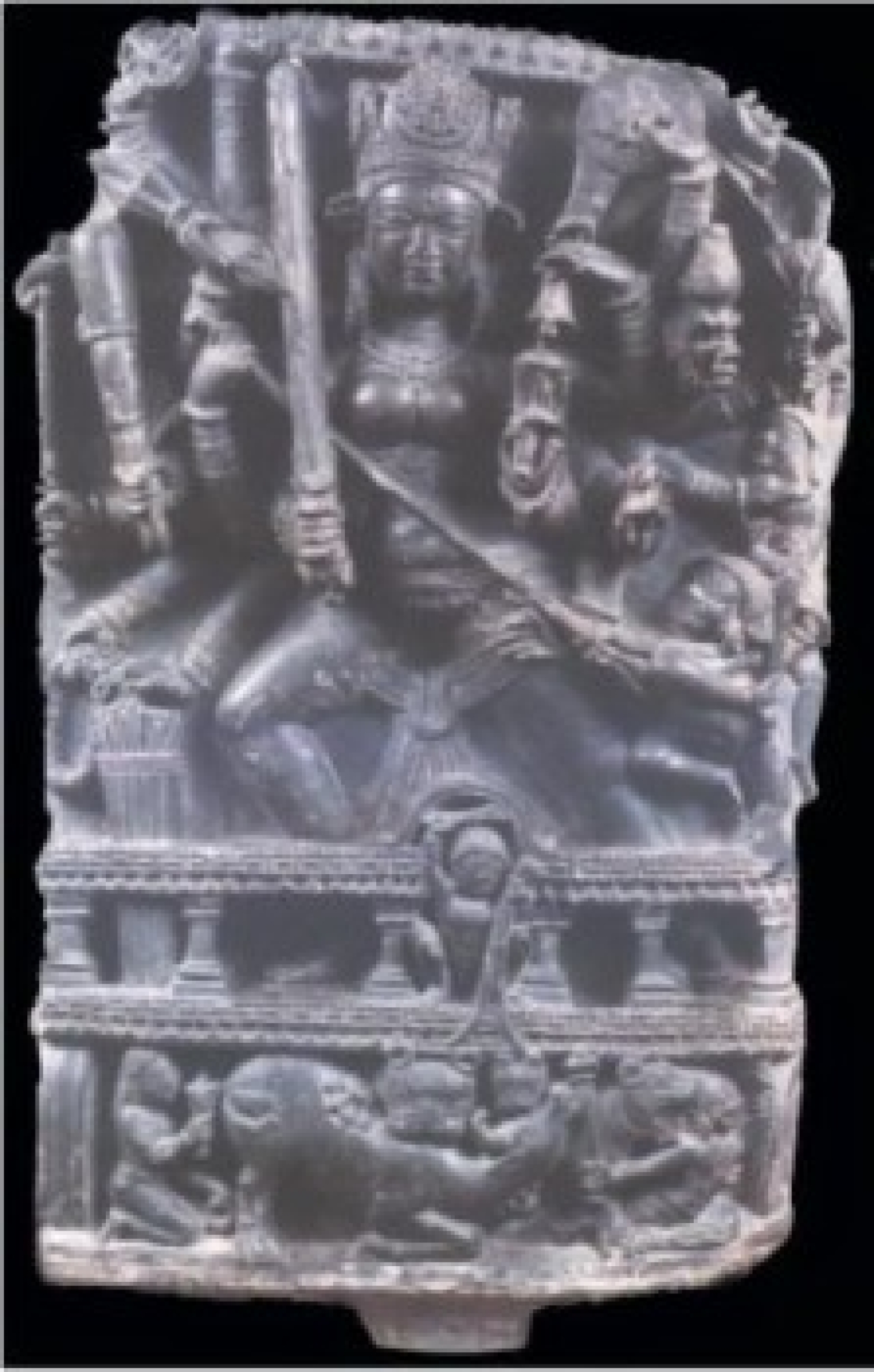 For starters, neither the Archaeological Survey of India (ASI) nor historians have been able to come up with a photograph of the Tengpora Durga of the time when she was still in situ in temple in Jammu & Kashmir. She is said to have been looted “sometime” in the mid-1990’s during the unrest in Kashmir.

“The registration number of ‘Tengpora Durga’ procured from the state government was sent to the museum [Linden Museum, Germany] We have also provided them with a copy of the FIR lodged with the J&K Police after the theft… Pictures of the idol published in earlier issues of Indian Archaeology, A Review, have also been provided”, ASI Additional Director General B R Mani told The Indian Express.

Having done a full check of the available copies of the Indian Archaeology, A review, the only reference seems to be as below, and no photographs are found.

25. MEDIEVAL SCULPTURES, JUNGPURA, DISTRICT PULWAMA,—S.N. Jaiswal and S.N. Kesarwani of the North-western Circle of the Survey noticed stone sculptures of Mahishamardini and Vaikuntha-Narayana at Tengpura belonging to circa tenth-eleventh century AD. The sculptures are now placed in the modern temple of Mata.

If indeed an FIR was lodged why hasn’t that been attached along with the other charge sheets on Subhash Kapoor, who is still under trial in Chennai with just 3 cases for thefts in Tamil Nadu?

Further, despite this being a recommendation of the UN Convention on the Means of Prohibiting and Preventing the Illicit Import, Export and Transfer of Ownership of Cultural Property, India still does not host a ‘lost’ database.

Back to the incisive article in The Indian Express. First, allow me to point out the obvious faults in it.

The photograph of the Durga on the article titled ‘The Tengpora Durga, on the cover of art expert Pratapaditya Pal’s book‘ is that of a bronze Durga and not a ‘rare 1,300-year-old stone Durga that disappeared from a small temple in Kashmir at the height of militancy in the mid-1990s’. 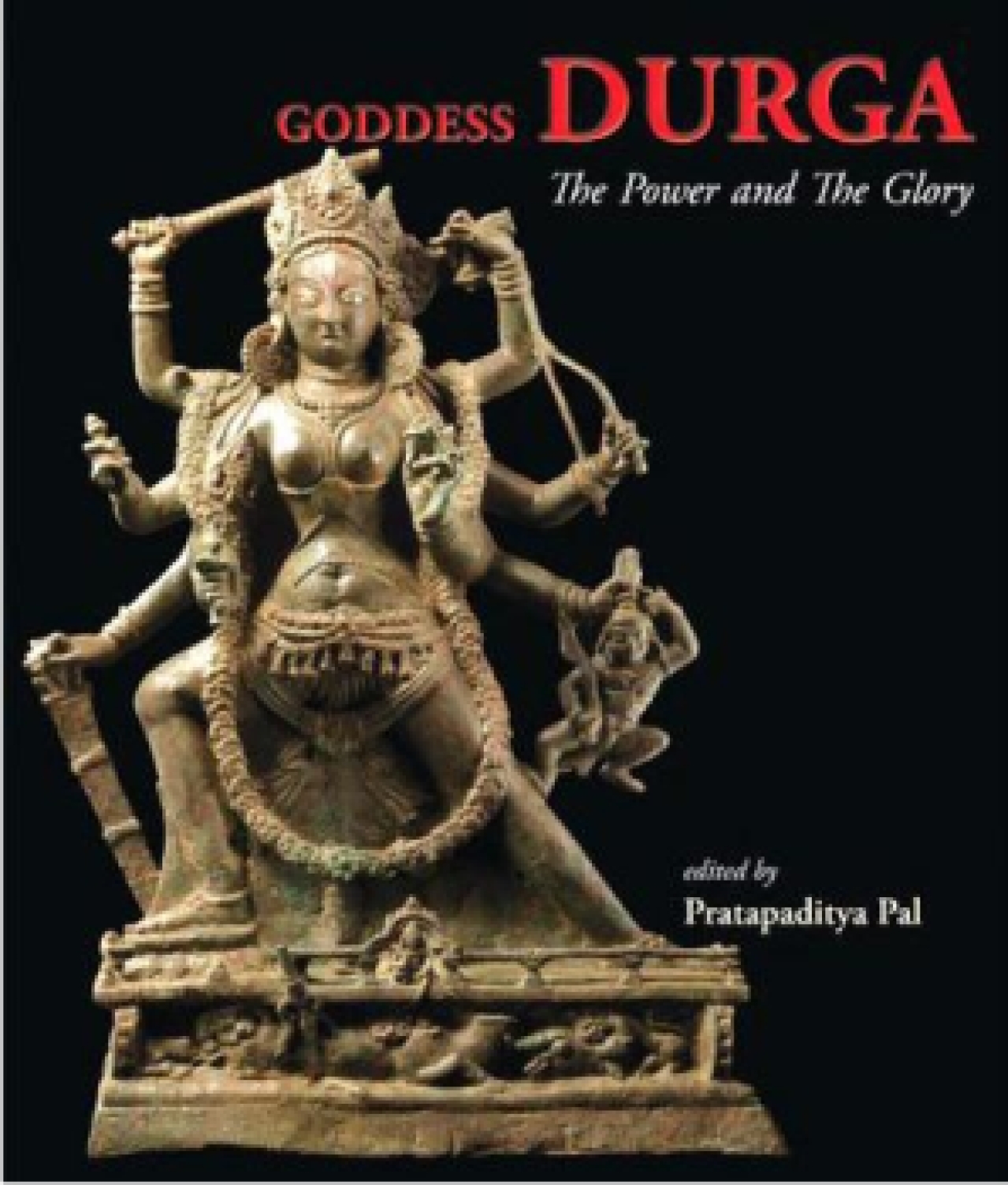 What is more interesting though, is what follows-

“the ASI was first tipped off about the Durga’s whereabouts in 2011 by Rakesh Kaul, a US-based Kashmiri Pandit industrialist whom Subhash Kapoor had allegedly tried to “cultivate” as a client.”

Dr Pal, honoured with the Padma Shri in 2009, in 2010 – while casually walking around the store one day, spotted it. Since he had documented it in his book, he confronted Kapoor, who said it might be a case of mistaken identity and promised to do the needful,” Kaul said.”

It is not clear if Dr Pal informed the Indian Authorities at that time. In the past Dr Pal has been quite vocal about his views on the red tape and reluctance on the part of Indian Government and the custodians with regard to even crystal clear cases of restitution of stolen artefacts from dealer who have been willing to return them.

However, some months later, Kaul said:

Dr. “Pal visited the Linden-Museum to deliver a talk and, while he was being given a tour of the museum’s assets in the building’s basement, he saw, “to his horror”, the Tengpora Durga.

“The then curator of the museum’s Indian department, Dr Gerd Kreisel, informed Pal that Kapoor had sold them the piece, along with all necessary paperwork and invoices. He (Pal) immediately got in touch with me, and I flew down to India in 2011 to inform ASI officials about Linden-Museum being in possession of the idol,” Kaul said.

Among the documents submitted to the museum by ASI is the “eyewitness account” of Asian arts scholar John Siudmak, who has claimed to have seen the Durga in the Tengpora temple before it was stolen. Siudmak’s account makes the ASI’s case “extremely strong”, Director (Antiquities) D N Dimri told The Indian Express.

Siudmak was in charge of the department of Indian and Islamic Art at auctioneer Christie’s before becoming a private consultant. He has claimed to have seen the Durga in 1990 in the “village of Tengpura” along with the great oriental scholar, Prof Simon Digby, and Assadouleh Beigh, who was at the time assistant curator of Srinagar’s Sri Pratap Singh Museum, “who have now both passed away”.

“It was in a small shrine protected by an iron grill. Ironically, the villagers would not allow us to photograph the piece since they thought that this would result in it being stolen. Beigh supplied me with the photograph that was used in my PhD thesis. At the beginning of the militancy, I was informed that it had been stolen, and I sent copies of Beigh’s photograph to Martin Lerner (MET) and Stan Czuma (Cleveland) to alert them. Dr Pal was also informed and certainly knew about it in 1994 since he was one of my examiners,” Siudmak is learnt to have written in an email to Rakesh Kaul”.

So at least the academic world knew about the theft of this sculpture from 1994!

Not only that, John Suidmak published the same Durga sculpture in his book Hindu-Buddhist Sculpture of Ancient Kashmir and Its Influences, in 2013. 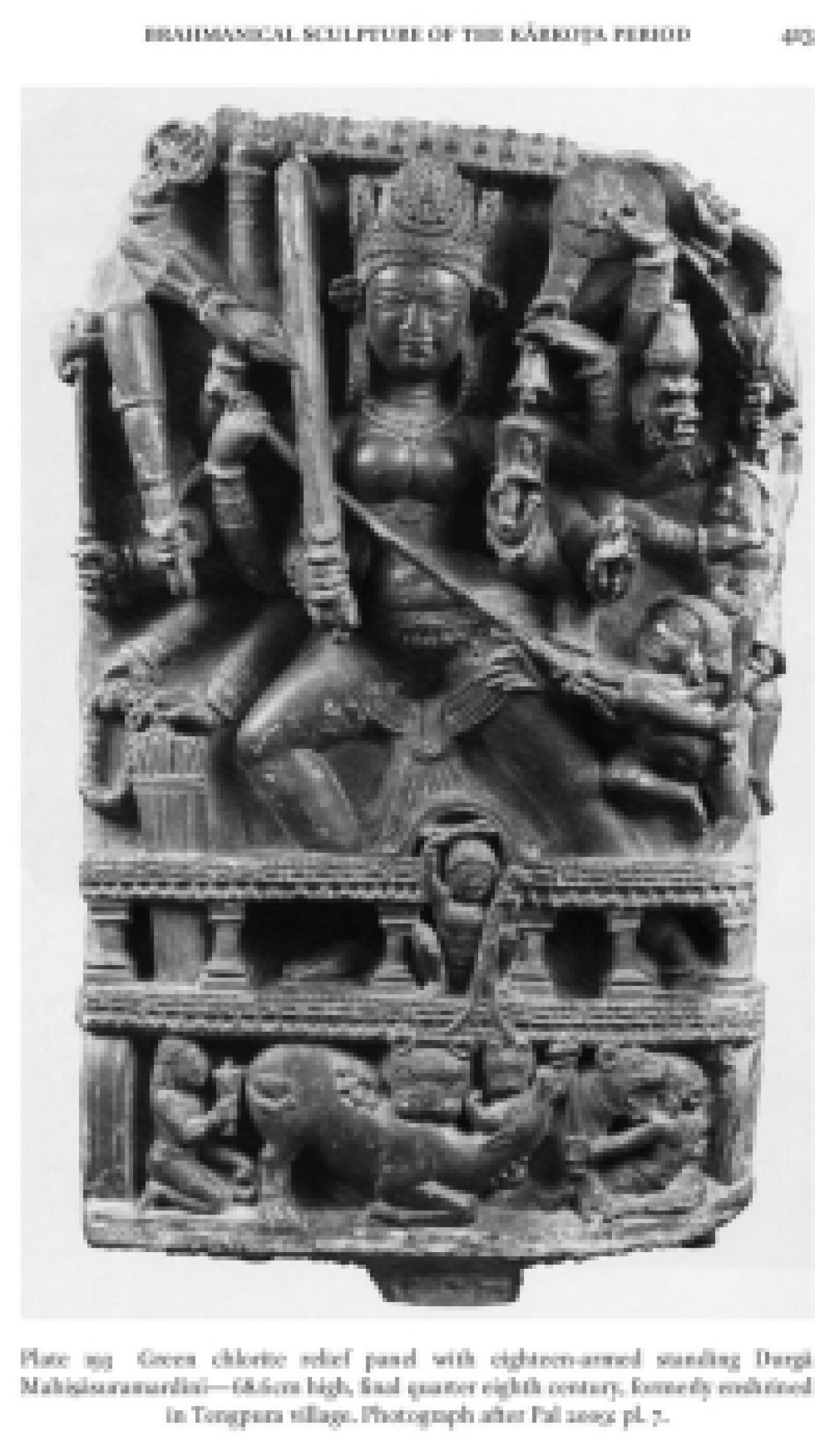 It has been a full year since a delegation from ASI went to the Linden Museum in Stuttgart and presumably provided all the above information in person but were sent back empty handed.

The museum on its part has not made public the provenance and supporting papers of the idol (the authenticity of which are in serious doubt given the fact that it was acquired from Subhash Kapoor).

The ASI too has not published any of its supporting papers. All it needs to do is to prove to the Linden museum that the object was removed illegally.

But now, things have somehow changed and when German Chancellor Angela Merkel visits New Delhi in October, she is expected to hand over to Prime Minister Narendra Modi a stolen heritage Durga idol as a goodwill gesture.

From this we can make some conclusions about India’s initiative to preserve her heritage. Some glaring issues that highlight the sad plight of lost Gods of India are:

—Lack of a national archive to even find an in situ photograph of such an important sculpture.

—Such gifts and apparent goodwill gestures tend to gloss over the fact that as per the UN Convention the artefact is already forfeited to India, and the handover is more symbolic.

—The larger problem is that these high profile much hyped Photo ops short-circuit the investigation process thereby cutting off the investigation from reaching the actual thieves, robbers and dealer network in India.

—Monumental neglect by the custodians and nonchalance by the Ministry of Culture ( then !) and GOI on restitution despite the personal intervention of a decorated scholar.

—Lack of will to publish loss database and case files. In this case, despite the mountain of evidences against Subhash Kapoor and 2655 objects seized by US customs – many from North India and even from centrally protected sites in Kari Talai, the 15 Million USD Barhut Stupa from a private owner – cases have been filed for thefts in only 3 temples sites in Tamil Nadu for a total of 30 artifacts. Of which only 8 have been located so far and only 2 restituted back.

Vijay is a shipping professional working in Singapore. He is an avid heritage enthusiast and runs poetryinstone, a blog aimed at promoting awareness of Indian art.
Get Swarajya in your inbox everyday. Subscribe here.
Tags:
1 Shares