Please Go On About ‘Hindutva-isation’ Of Onam, It Only Exposes Your Cultural Illiteracy 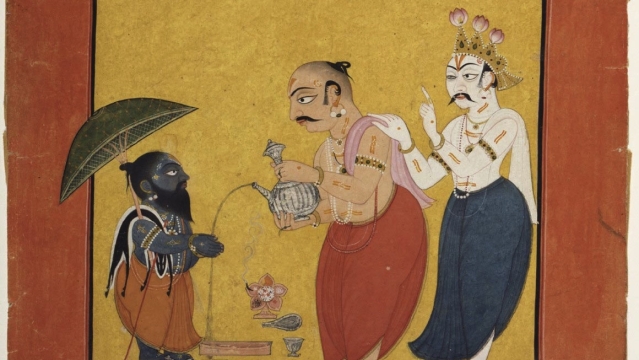 A scene from the Vamana avatar story

On 13 September, Amit Shah tweeted what was seen as an ‘Onam greeting’. The image accompanying his tweet depicted Vamana, an avatara of Vishnu, with his feet on the head of the king Mahabali. This tweet of his quickly became another occasion for the ‘progressives’ to indulge in Hindu bashing with the usual charges of Onam being appropriated by Hindutvaites. In an outbreak of Pavlovian responses from the usual reactants, it was also claimed that Mahabali was originally a Dravidian dark-skinned king who fought against the Aryan upper castes. Another ‘veteran journalist’ went on to claim that Mahabali was originally ‘Mavel’ mentioned in ancient Sangham literature.

The postured anger in the tweets, and the imposed narratives of so-called subaltern and Dravidianists on the Vaman-Mahabali legend, have one thing in common - an abject cultural illiteracy.

In fact, the Perumpannatrupadai from the Sangham canon mentions the Vamana avatar without any animosity. In the Aazhwar hymns ancient Tamil too, the Vamana avatar is highly praised. Thirumazhisai Azhwar, whose songs and life events are known to challenge the ritualism - the so-called ‘Brahminism’ in the progressive jargon- hails Vaman avatar. The essence to be gleaned from the Vaman avatar mythology is the challenge posed to temporal power by the spiritual. It should be remembered that the tradition places Mahabali as the descendant of Prahlada.

In versions of the myth, Mahabali was not a completely benevolent king. Even if one insists on reading mythology through the prism of modern conflicts—which is not at all the best way to read a mythology—one will have problems with the narrative that Mahabali was an anti-caste, non-Aryan ruler overthrown by the brahminical Vamana.

For instance, M.C.Raja, one of the greatest leaders of Scheduled Communities from Tamil Nadu, in his book ‘The Oppressed Hindus’, points to the legend that it was Jambavan, considered of the the ancestors of SC community, who proclaimed to the public the dethroning of Mahabali by Vamana. M.C.Raja also points out that Jambavan was considered the man of justice and calls Mahabali ‘a cruel tyrant’.

Can we then say that the Vamana avatar was actually an enlightened dethroning of a cruel chieftain who denied land to the Scheduled Communities? Such readings of the myth are the legacy of colonial interpretations of history which are outdated elsewhere in the world.

Traditionally, the Vamana avatar story also comes with the moral of never to underestimate those who may be considered by the general population as physically deficient. The bowing down of the king to the midget whom the ancient Tamil hymns hail as the embodiment of knowledge, teaches us the renunciation of ego. That the feet of Divinity which measured all the physical universe in two strides would contain itself with the head of a human being, shows the spiritual journey from the outer to the inner, from the physical to the realms of the psyche where the Divine abides when the ego is shed away.

From the egoistic holder of lands, the king becomes the enlightened distributor of the lands. After all, all the world is contained by the Divine. The myth contains the seeds of the trusteeship concept which Mahatma Gandhi would advocate later. The king realises that the land is not his, but that of the Lord whose body is both the natural world and the society itself. And that contains also, the spiritual core of democracy.

It may be too much to expect our pseudo-secular politicians to have such common traditional insights into the mythologies of our own people.  Even so, the least they can do is to refrain from exposing their cultural illiteracy.