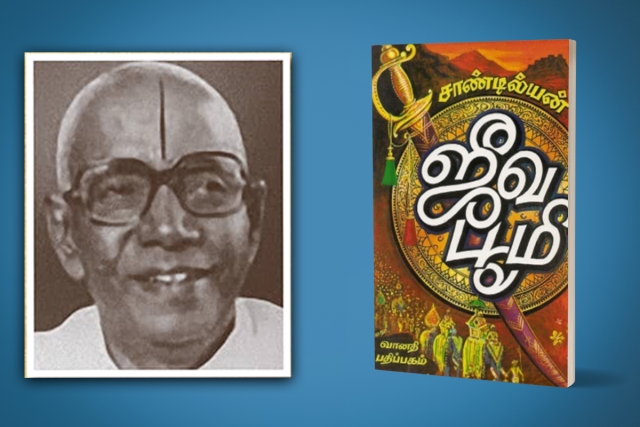 'Sandilyan' is a name synonymous with historical romances for at least two generations of Tamils. It was the nom-de-plume of Sri Bhasyam Iyengar. Born 110 years ago, to this day, he defined the genre for the Tamil popular fiction landscape and was its emperor – following the style of ‘Kalki’ ‘s Pallava-Chola Trilogy.

Influenced by Rajaji as a teenager, he joined the freedom movement and soon he became aware of his own literary skills.

Encouraged by giants like Thiru.Vi.Ka and Kalki, he started writing quite a lot of fiction concerning social issues and also became good at writing screenplays.

However, it was as a writer of historical romances that he became immensely popular.

In his historical fiction, one can find two important core themes – Hindutva and Tamil pride.

Here is a random look at his historical romances.

Jeeva Bhumi was published in 1953. It was initially serialized in the Tamil magazine Amuthasurabi.

It was even enacted as drama by the Fine Arts club of Triplicane. Among those who came and saw the drama and appreciated it included then the Chief Justice of Madras Province P.V.Rajamannar and the then Madras Governor Sri Prakasa.

When the work was published as a novel the foreword was written by Prof. K.V.Rangaswamy Aiyangar – then the most eminent of the southern Indian historians.

Sandilyan chose the life and times of Dayal Shah as the historic setting for his work.

Dayal Shah was a civil minister of Mewar. But having seen and being moved by the condition of Hindus under the Mughals, he became a master strategist.

Sandilyan writes in his novel that for every cruelty that Aurangazeb inflected on Hindus, Shah the strategist retaliated in kind.

The story itself is about a Hindu Rajput warrior, Rathan, in the pay of Mughals.

A brave warrior, he however believes that women are just objects or worse, characterless, money-oriented creatures.

In the Mughal camp, there arises a plan to abduct Ahila, the niece of Dayal Shah with the objective of slowing Shah down.

As one collaborating Rajput states, Ahila was like fire and she could not won over. Our hero Rathan laughs derisively and states that he can make any girl fall for her and there is no such thing as a virtuous woman.

After many events, while Ahila does fall for Rathan and even risks her life to save him, Rathan himself undergoes a change of heart. He realises that this nation is still a living nation, a 'jeevabhumi', despite all the invasions, because of women who are indeed the river of fire and life who sustain the national life.

So, he renounces his position in the Mughal army and joins Dayal Shah to fight for freedom of the motherland.

On the authority of Col. Tod, Sandilyan describes the deeds of Dayal Shah thus:

The villages revealed what kind of answer Dayal Shah had given to emperor Aurangzeb. Villages were raided all the ways. The houses were deserted and the mansions had been pulled down. Several mosques had lost their domes and stood like village granaries. In almost every village well there were torn Koran pages. Those who were Muslims till yesterday were today singing Ram Bhajans. For every cruelty Aurnagzeb had done Dayal Shah had given a reply.

In fact, Sandilyan was writing almost verbatim what Col. Tod had recorded about Dayal Shah. That this historical reference was presented for the popular Tamil audience should show the kind of patriotism he had for the Hindu nation.

The book is a perennial bestseller in Tamil Nadu. As on 2019, the book had seen its 25th reprint.

The foreword written by Prof. K.V.Rangaswami Iyengar, running almost 16 pages, is itself a valuable document in which he wrote that the actions of Dayal Shah did not happen in an vacuum:

In 1659 Aurangzeb had declared that he would forbid only the building of new temples but would not demolish the new ones. In 1664, he forbade the repair of Hindu temples. In 1669 he issued general instructions to his Governors to pull down Hindu temples, and schools and put down their teaching and religious practices. The most famous temples-e.g., at Somnath, Muttra, Brindavan, Banaras and even loyal Jaipur were so treated. During the war of 1678-80 in two months alone he destroyed 236 Hindu temples. Hindu religious fairs were forbidden. Hindu village officers were replaced by Muslims. In 1668, all Hindus except Rajputs were forbidden to ride in palanquins or on elephants or on horseback or carry arms. The persecution was becoming day by day intolerable.

He had written quite a few works on Rajputs fighting against the Islamist invaders. This includes among others Rana Sanga and Veer Hamir.

During the early 1970s, he serialised another mega-work in the popular Tamil weekly ‘Kumudam’: Jala Deepam.

Jala Deepam became an intense hit with the readers. It introduced to Tamil readers what the establishment history books had intentionally hidden – the great Hindu naval resistance and the Hindu empire of the Marathas.

He brought into flesh and blood three characters from history for the readers: Peshwa Balaji Viswanath, Kanhoji Angre and Swami Brahmendra – three important architects of Hindu resistance movement against the Mughal and European invaders. In his introduction to the novel, Sandilyan wrote:

I have always wanted to write a novel about the Maharashtrians. For the protection of Hindus and Hindu Dharma both Rajputs and Marattas have fought. In this I have written a few fictions about the Rajputs. However, I could not get myself till now to write about Marattas. When searching about Maharashtrian history I read the passage written about Kanhoji Angre by Kincaid and Parasnis which described him as the uncrowned emperor of Arabian Sea. … Slowly Angre took a Viswarupa in my heart.

In the novel, a Tamil youth from Tanjore comes to the Maharashtrian coast with a mission – his mission was given by the queen of Tanjore Marathas. And it was to kill her own abducted child. When the youth, Ithayachandran asks the queen mother why she wants her abducted child killed, she states that the Hindus after centuries of suffering are getting united through the Hindu confederacy the Marathas were creating and already there are destabilising forces using the competition between the heirs.

One can understand the way the three-volume historic romance develops. The book contains dialogues which speak pure Hindutva – reminding the reader the kind of sacrifices that were done by individuals and the pains they endured so that their people, we the Hindus, could be Hindus and this nation, a free nation, where people of all faiths and all communities could live in peace and harmony.

As early as 1973 he had given a timeline -from 1698 when Angre became appointed as the head of Maratta navy to 1714 Coloba treaty with the British. The genius of Sandilyan is in associating Tamil youth from Tanjore with the Hindu freedom struggle that Marattas were fighting and seamlessly integrating the characters underlining thus the cultural and spiritual unity of India across the linguistic diversity.

Yuavana Rani was another interesting fiction that Sandilyan wrote as a serial in 1960s which later became a very popular best-selling novel. This described how a Yavana queen from the West is brought to Sangham Tamil land with the hope that she would be instrumental in establishing a Western Yavana empire here. The story was set in the time of Sangham Chozhas particularly Karikal Chiozha.

His love for Sri Vaishnavism and Azhwars also surface in his works. In his work ‘Kavarntha Kankal’ (Eyes that stole (the heart)) he described in the novel form how Sri Ramanuja brought Pillai Urangavilli Dasan a person so attached to the beautiful eyes of his wife into the spiritual fold by showing the eyes of Sri Rangam Vishnu. The novel spoke about the dignity of the courtesan dancers as well as the paramount greatness of devotion over the birth based caste system.

In his work ‘Pallava Thilakam’ he brought to life a later Pallava emperor who was a great Vaishnava Vedantin who was attacked by Rashtrakoodas. There was an in-house conspiracy against this Vedantic king in which his own relatives conspired with the enemies because they hated his Vedantic attitude to life. The work a thriller of a historic romance at last shows how the Vedantic king was also practical and defeats both the conspiracy as well as the enemies but being a true Vaishnava does not want to celebrate the victory and declares it as his defeat. Sandilyan’s explanation in his introduction reveals the kind of preparation he had done and how he harmonized historical facts with his own imagination:

The son of second Nandivarma Pallavan Thanthi Varman had the title ‘Pallava Thilakam’. His mother was a Rahstrakoota queen. Subramania Iyer mentions this in his ‘Historical Sketches of Ancient India’. ... According to the inscription in Thiruvallikeni Parthasarathy temple we know that he was a great Vaishnavaite. And he belonged to Bharadwaja Gothra. Visweswaranath Sen in his ‘History of Rahstrakudas’ mentions the invasion of Rahstrakootas upon Kanchi during the reign of Thanthi Varman. ... Though Thanthi Varman got defeated in the wars of his time, his empire never shrank. So these defeats could not be true defeats. Based on all these I have written this novel adding my own imagination.

A very lesser known aspect of his life was his typically Sri Vaishnavaite love for the downtrodden and the marginalized in the society. His son too inherited the same this writer was told by a beneficiary from an activist for Scheduled Community rights – who benefitted from the service activities of his son who was an academic.