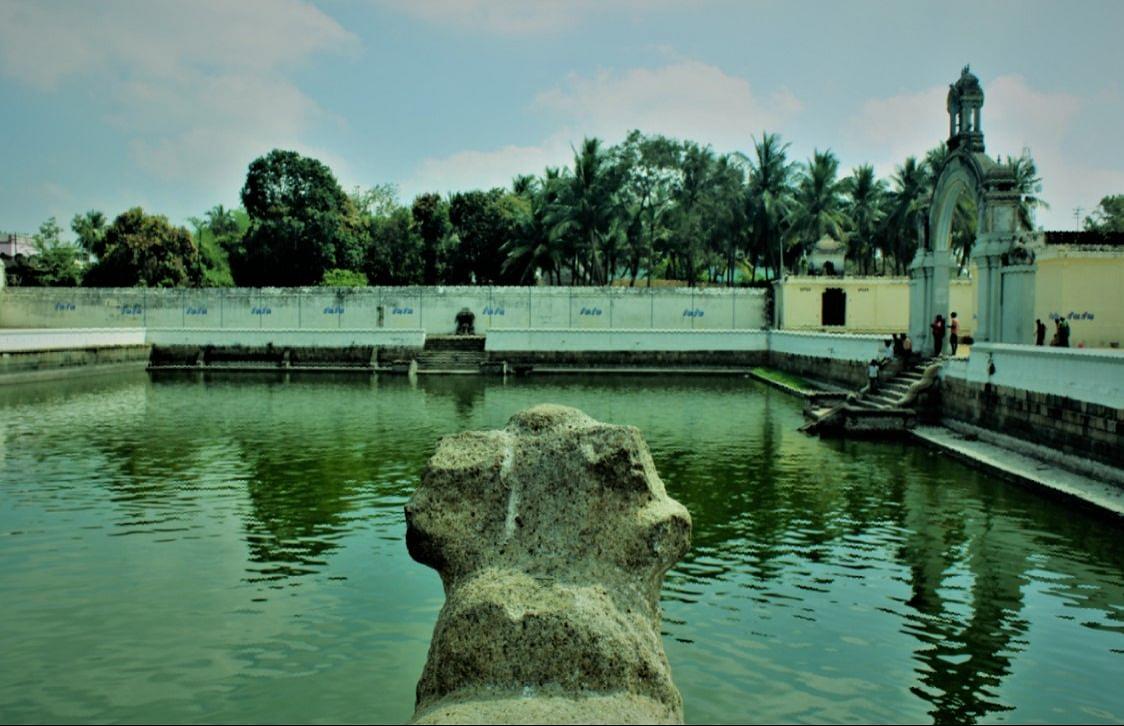 The temple pond of Sirkazhi — from where it all started.

Sirkazhi is a small dusty town near the famous Vaideeswaran temple close to the temple town of Kumbakonam in Tamil Nadu. The temple here is famous and unique for various reasons. According to puranas, it was here that Lord Shiva presented himself along with the goddess in a boat during the cosmic dissolution. That is why he is also known as Thoniappar. Thoni in Tamil is a small boat, which is why Sirkazhi is also called Thonipuram. In deeper symbolism, thoni is considered as pranava or the mystic syllable Om.

Here, Shiva is worshipped as Sattainathar — a very unique and magnificent form. During the cosmic dissolution, even as he uses pranava as the boat, he also wears all the 'kalais' or principles of creation and sustenance of existence as his shirt. The Sirkazhi town has many names associated with different divine plays indulged in by Shiva. However, for the devotees of Shiva in Tamil Nadu, the name Sirkazhi is always associated with an event that happened inside the temple complex, and which led to the revival of Shaiva Dharma in South India.

Tradition has it that more than 1,300 years ago, a child was waiting for his father at the footsteps of the temple pond. The father had immersed himself in the pond doing the usual ablutions. The child, having accompanied his father for the first time for such a ritual bath, was alarmed. It started crying and called out for his mother and father. Shiva sent Parvati, who gave the child the milk of wisdom and disappeared.

When the father came and saw traces of milk around the child’s mouth, he got angry and threatened the child to tell him whose spittle milk the child had consumed. On hearing that, the child burst out into a series of songs — poetry that contained in it the essence of vedas and upanishads. So started the journey of Thiru Gnana Sambandar. His father Sivapaathahridayar understood that the child has had a divine experience.

The pond exists to this day. The events related to Thiru Gnana Sambandar are depicted on an arch. The figurines stand faded. People who come there, mostly newly-wed couples, for blessings of the god, and some locals, do not seem to care much about the historic and spiritual significance of this place.

Along the pond is the temple for the goddess. She is called ‘Sri Sthira Sundari’ and in Tamil, she is Thiru Nilai Nayagi — the goddess, who is auspiciously firm. There are paintings, a few centuries old, which have been left to wither away.

From the temple of the goddess, the path to the pond has a beautiful mandapam with the ceilings adorned with paintings depicting the incidents in the life of Sambandar. Again, these paintings, definitely more than a hundred years or a few decades old, are left uncared for.

Here is a classic example of the corrosion of a cultural capital. The history of Sambandar is one of the most cherished events for the Shaivaite devotee. Nothing would please a Shiva devotee than have a set of picture cards of these very events as they are depicted through traditional paintings on the ceilings of the mandapam near the pond where it all happened. They can involve local self-help groups to do it. The Atheenam (Shaivaite monastery) that is in charge of the temple can use such an initiative to propagate Shaivism to the masses along with serving the economic interests of local communities.

Inside the main temple of Brahmapureeswarar-Thoniappar-Sattainathar, there are exquisite sculptures. The one that needs special mention is the one depicting Ganga-Visarjanar. Shiva is placating Parvati, who is visibly not very happy with another maiden, Ganga descending into the matted hair locks of her husband. One climbs through the steps to see Thoniappar and then Sattainathar. Here, photography is strictly prohibited. The forms of Shiva one sees here are very rare and there is no abisheka to the form as it is considered very delicate. The form is divinely life-like. Special pujas to these two forms on Fridays attract a lot of people, and there are a considerable number of merchant community members contributing to these pujas.

Inside the temple complex, there is a separate temple for Sambandar. Though the outer entrance of the temple seem to be recent, the lion-based pillars in the corridors show the temple to be quite old. The prasad given here is milk, and the temple gurukal (archaka) relates the incident of the goddess giving milk to Sambandar to everyone who visits.

Along the temple corridor, there are a few recent calendar art paintings depicting the Sthala Purana but even they are not properly maintained. In the corridor, one can see what might be traces of ancient murals perhaps lost for ever.

The Sambandar temple also houses a shrine for the goddess, who gave him the milk of wisdom. In fact, the very first song of the first Thirumurai, the canonical Shaivaite scriptures, starts with the description of the feminine earring worn by Shiva thus symbolically pointing to the ‘arul’ of Shiva.

While the milk given as prasad is in itself good, it will be a great value addition if good hygienic milk in a vial, or milk products made from the milk collected from the cattle of local agriculturalists, is given as prasad. Thiru Gnana Sambandar is considered in Shaivaite religion to contain in him an aspect of Skanda-Muruga.

Through the revival of Shaivism, Sambandar also fought against the prejudices rigidly moralistic life-denying religions had introduced in the society against Panars. His love for Thiru Neelakanda Yazhpanar is a lesson in securing social justice along with social harmony. Unfortunately, these aspects of Shaivite Hinduism are not taken to the modern youths.

The most pathetic aspect of the temple is the ‘library’ that exists in the name of Thiru Gnana Sambandar. There is not a single book in it. Given the fact that Thiru Gnana Sambandar was one of the principal revivalists of a grand movement that has woven spiritual, philosophical, artistic and social dimensions in a seamless manner, this can only be construed as a calculated insult to his sacred memory.

The temple is rich in inscriptions. Unfortunately, there is no mechanism to share with the pilgrims the messages on these inscriptions.

A coffee-table magazine highlighting the important inscriptions and the Thevaram hymns associated with the temple, available right there in the temple could become a best-seller — disseminating cultural knowledge and also generating revenue.

Unfortunately, here too, the inscriptions are not cared for at all. Worse, an inscription that seems to mention ‘Rajaraja’ was coated with red paint.

What is being lost in all these is something even more dangerous for our culture. Ultimately lost to local and to the general Shaivaite community, the data on these inscriptions may be archived in some university departments from where they can be distorted to build a narrative against the very Shaivite religion. So, it becomes important that the Atheenam (in this case Dharmapura Atheenam) and the local Shaivaite community to employ good historians and artistes to bring out a comprehensive work on this temple both in Tamil and English.

As one steps out of the Thoniappar temple of Sirkazhi, one comes across a school, which is now 122 years old. Its name is 'Sabhanayaga Mudaliar Hindu Middle School'. So, 122 years ago, in this small but religiously important town of Sirkazhi, Sabhanayaga Mudaliyar was motivated to extend educational service to the society with clear identification with Hinduness. Not only is the school in front of the temple, where the goddess gave the milk of wisdom to the crying infant, Thiru Gnana Sambandar, but in the centenary building of the school they have depicted the scene of Sambandar receiving the milk of wisdom.

The spirit and values of Thiru Gnana Sambandar have for more than 1,000 years led Tamil Nadu away from the spiritual ignorance and cultural darkness. When shallow, moralistic life-negating religions strangled dharma in Tamil Nadu, Sambandar led Tamil society into a renaissance that ultimately made the Chola glory possible.

Today, dharma in Tamil Nadu is facing a similar, precarious situation. A proper management and renovation of the temple in Thiru Gnana Sambandar’s birthplace can go a long way in the battle to preserve culture and dharma in the state. Dharmapuram Atheenam, Shaivaite scholars and local Hindu community should come together to achieve this.