Star Wars Prequel Trilogy, Vedanta, And The Destruction Of Temples 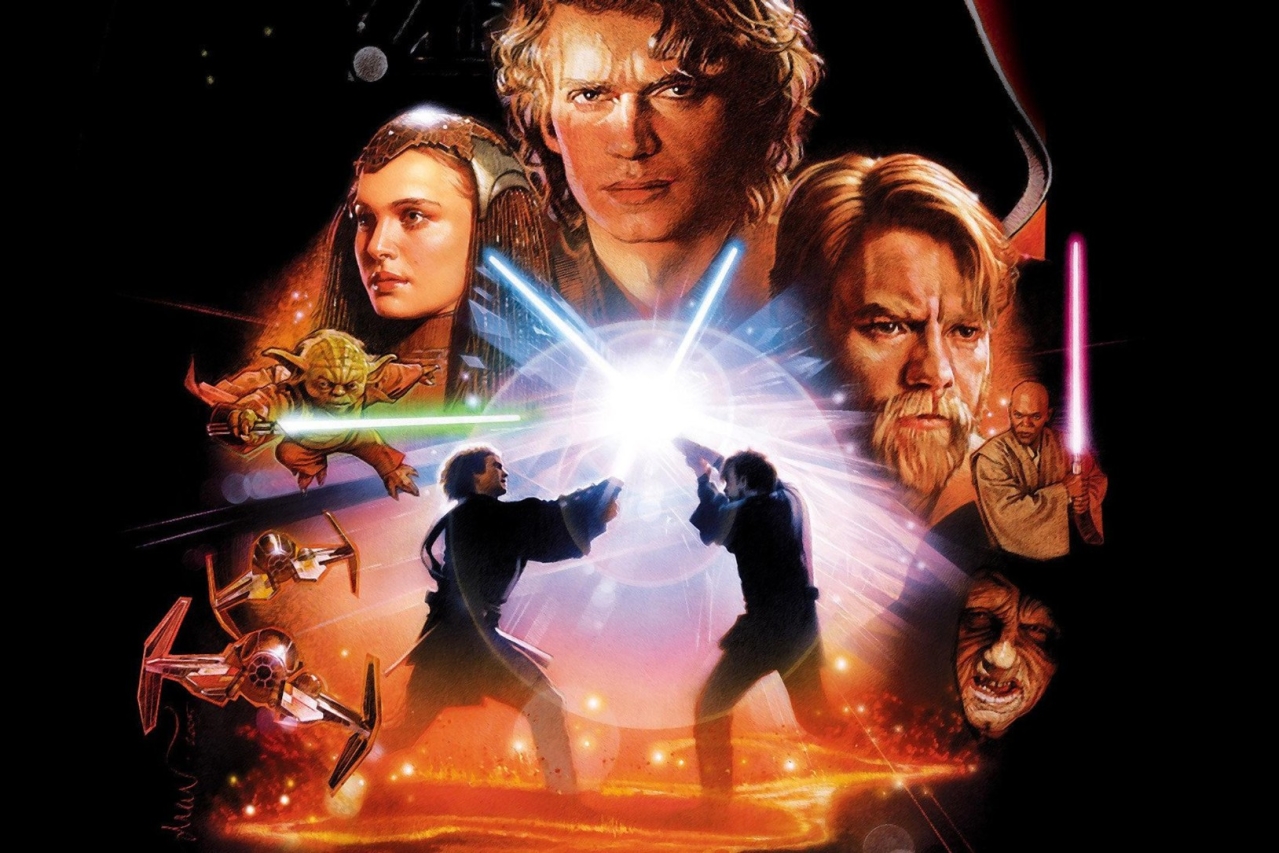 A lot has already been written about Star Wars and Hinduism. A crisp lecture on ‘Star Wars and Vedanta’ by Dr Jeffrey Long at the Hindu American Foundation (HAF) is an excellent introduction to the topic.

Another is the book, Jedi in the Lotus (2010) by Steven Rosen (Satyaraja Dasa) which explores the Hindu themes in the Star Wars series. Mostly, and naturally, the focus of these works has been the original trilogy--episodes IV, V, and VI.

Presented here is a bird’s eye view of the Hindu elements as well as themes important to the modern Hindu situation as observed in the prequel movies.

They show the transformation of Anakin Skywalker from a sweet, lovable, prodigious child into an instrument of the oppressive Emperor.

This particular transition depicted in the space opera inadvertently plays out some of the strongest Hindu themes and is in a way relevant to the civilisational problems the Hindus are facing.

To start with, in the Indian tradition there is a way of telling a divine story.

Both, in the Ramayana and the Skanda Purana, after Ravana and the Asura-brothers were vanquished respectively, the origins of these Adharmic personae are explained.

It’s an energy field created by all living things. It surrounds us and penetrates us; it binds the galaxy together.

Dr. Jeffrey Long considers the ‘Force’ to be ‘analogous to Brahman’. He explains:

It is analogous to the concept of Brahman that one finds in the Vedanta philosophy. Vedanta philosophy is based on the idea that there is one supreme universal reality that all things are part of, from which all things have emerged. And the aim of Vedanta as a practice and as a way of life is to realize and fully manifest this Brahman in our lives.

This Brahman is the core of our own being. It is identical with our self the Atman. And realizing that true self not the ego self ... is the ultimate aim of our existence. And this Force as it is presented to us in Star Wars is something that really helps us realize our highest potential.

In the Phantom Menace, there is another definition provided with relation to the Force.

Jedi knight Qui-Con Jinn explains to Anakin the very physical basis for the Force being felt in living beings:

Midichlorians are microscopic life-forms that reside inside all living cells.... We are symbionts with them.... Without the midichlorians life cannot exist and we would have no knowledge of the Force. They continually speak to us, telling us the will of the Force.

In the 22 years that separate that first definition of the Force and the ‘midichlorian explanation’ of the manifestation of Force in living beings, endosymbiosis has emerged as a popular idea in life sciences.

It is easy to identify the real inspiration for midichlorians. It is, in fact, the mitochondria, as George Lucas himself acknowledged.

Sooner or later, one has to face the fact that our selves (biological and psychological) may actually be constructed by the harmonic orchestra of millions of microorganisms which live not just within our bodies but also within each cell.

The Star Wars series shows how that view of life and Vedanta are reconcilable.

Interestingly, Swami Ranganathananda (1908-2005), a monk of the Sri Ramakrishna-Vivekananda Vedanta order, in his commentary on the Bhagavad Gita (between 1988 and 1990) spoke about divine energy being present within each and every individual cell:

Take a cell; what regulates a cell? Something from within itself. ... In genetics, we say it is DNA, RNA. These are all observable phenomena; but go deeper, still deeper if you can, and you will really find nothing but the divine as the inner energy that manipulates the processes in the living cell, in this body, in this universe, everywhere; that is the one ultimate Reality.

So, the universal Force that binds the galaxy together, manifesting itself within every sub-cellular symbiont is a conceptualisation that resonates well with Vedanta. This scene can actually fortify the minds of millennial Star Wars generation with Vedanta.

When Anakin Skywalker is presented in the Jedi council, Yoda points out to a young Anakin that he is afraid of letting go of the attachment to his mother. The kid snaps back at Yoda, asking what that had to 'do with anything'.

This wisdom of Yoda has an uncanny resemblance to the following sequence described in the famous verses of the Bhagavad Gita:

These slokas became quite famous in popular culture when Gandhiji repeatedly used them as they were his favourite from the Gita verses.

Here, the word ‘Buddhi’ is often translated as ‘intellect’ or ‘discriminatory power’. But as the mystic scholar Anirvan explains, Buddhi is not just intellect but 'admits of many subtle nuances always suggestive of the symphonious variations of the ultimate Truth' which 'whether as a spiritual stage or an instrumentation ... has both a psychological and a cosmic aspect...'

Here is a problem that we often face when we take a spiritual discipline or any sacred art form into the secular space. When Anakin asks what his own deep emotion has anything to do with his Jedi disciple-hood, he sees Jedi training as a kind of secularised training for his mind and body.

In Attack of the Clones, often considered as the movie with most overt political allusions, we see the difference between the education system of the Jedi and the clones.

The Jedi education system centers around a temple. The movie shows a scene where Jedi master Obi-Wan comes to Yoda when he is teaching his young disciples.

A Jedi kid answers immediately, ‘because someone erased it from the archive memory.’ Yoda exclaims ‘Truly wonderful the mind of the child is!’

As against this, when Obi-Wan discovers the clone army, he finds all students as clones of each other, going through a mechanical rigour.

The difference between an organic, intuitive, and liberating education that celebrates the fresh and open nature of a child’s mind and the mechanistic clone education system that ultimately makes a society slave, is shown as an important point in the major war that would soon be forced on the Jedis from the dark side.

In Revenge of the Sith, the final movie in the prequel series, the transformation of Anakin Skywalker to Darth Wader is complete.

Darth Wader wants to conquer death. He seeks immortality, not only for him but for those near and dear to him. He is afraid of death.

It is this seeking of physical immortality, stemming from the fear of death, that makes him go to the dark side.

Supreme Chancellor Palpatine, who would later become the Emperor Darth Sidious, lures Anakin to the dark side through latter’s fear of death and seeking of physical immortality.

He makes the monopolistic claim here: 'Only through me can you achieve a power greater than any Jedi'.

As Darth Vader, Anakin enters the temple of Jedi and destroys it, killing all the children under training there.

One cannot but recall the purge of the last pagan scholars in Alexandria and the killing of Hypatia and the destruction of our own Nalanda, Somnath and massacres by the monopolistic invaders.

When Obi-Wan comes to know that Anakin had turned to the dark side (Sith), he is shattered.

When Yoda tells him that they should destroy the Sith, Obi-Wan tells Yoda, that he will not kill Anakin as the latter is ‘like a brother to me.’

As the typical Arjuna-Krishna scenario unfolds, Yoda exhorts him to fight the dark side without such considerations as now the young Anakin had become Darth Vader.

Yet, Obi-Wan still had hope for Anakin.

At last, when he confronts his erstwhile disciple-brother, Anakin turned Darth Vader makes himself clear: ‘If you are not with me, you are my enemy’.

It is this statement of Anakin that makes Obi-Wan realise that Anakin had completely embraced the dark side.

A variant of the quote had been already made popular by George Bush by the time this film came out.

In its original form, however, it is attributed to Jesus in Matthew 12:30 – ‘Whoever is not with Me is against Me, and whoever does not gather with Me scatters.’ The Jesus-Anakin/Darth Vader resemblance runs throughout the prequel.

The person who prophesised about Jesus, John the Baptist, was killed in the Jesus legend. Similarly, Qui-Gon, who considers Anakin to be the chosen one gets killed.

Anakin’s mother states that he was born without a father, a kind of immaculate conception.

Finally, Anakin embraces the dark side with the words that paraphrase those of Jesus.

While one cannot think of George Lucas as having encoded a strong anti-Christian message here, the parallels are a bit too loud to ignore.

One can perhaps think that what is criticised here are the strong monopolistic elements of expansionism in Christianity which have made it into a global proselytising mission destroying planetary theo-diversity.

Finally, the emperor wins over Darth Vader’s complete submission by making him feel guilty of killing of his own wife, Padme. Remember, it was preventing Padme’s death that made Anakin join the dark side in the first place.

The message that emerges from the prequel is one of caution. The Jedi unwittingly strengthened the mechanistic state and somehow got their thinking clouded, weakening the relation between the spiritual core and the Republic.

So, they lost their temples, got massacred and had to live as fugitives as the Sith took over the entire galaxy – far, far away and long, long ago.

And Hindus will do well to look at their own history.

Get Swarajya in your inbox everyday. Subscribe here.
Tags:
159 Shares