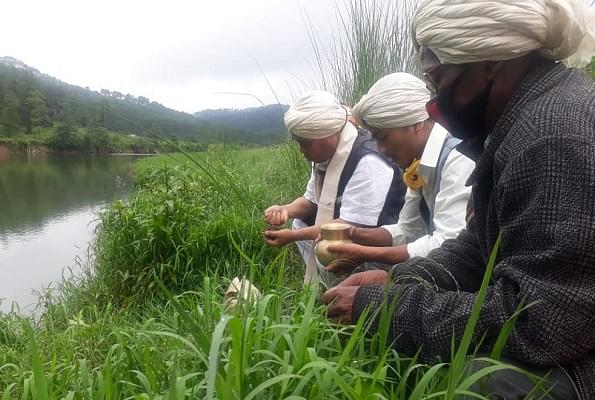 Tribe members collecting water from a local river in Nartiang for the Bhoomi Puja at Ayodhya.

When Prime Minister Narendra Modi and others perform the bhoomi puja for the grand new Ram Mandir at Ayodhya next week, 500-odd tribal families in a remote corner of faraway Meghalaya will have a stake in that ceremony.

The families, all residents of Nartiang in West Jaintia Hills district of the state, collected soil from their Durga Mandir — a little-known but powerful shakti peeth where Devi’s left thigh is said to have fallen — and water from two local rivers for the Bhoomi Puja at Ayodhya.

The waters of the Myntdu and Myntang rivers that are revered by the locals were collected by elders of the community, clad in their traditional dhotis and white turbans, amidst the chanting of Vedic shlokas on Tuesday (July 28) morning.

“A handful of soil was also collected from the Mandir premises and, along with the water from the two rivers, placed before Devi. We performed a brief Puja and sought Devi’s blessings for the Ram Mandir’s bhoomi puja. A small group of local people are taking these to Ayodhya,” Bappan Deshmukh, the priest of the 650-year-old Mandir told Swarajya over phone from Nartiang.

Deshmukh said the decision to collect water from the two rivers and soil from the mandir premises and send them to Ayodhya was taken by elders of the Pnar community.

“They decided that since the bhoomi puja for the construction of the Ram Mandir at Ayodhya would be a major event for all Hindus, the Pnars being Hindus would also like to be part of it,” said Deshmukh.

Deshmukh is the 29th generation pujari of the mandir. His forefathers were invited to Nartiang from Maharashtra in the late 14th century by the then king of Nartiang to preside over as priests of the mandir that’s dedicated to Jayanteswari (one of the many names of Devi).

The Pnars residing in Nartiang and some other parts of the Jaintia Hills have resisted a lot of pressure, threats and blandishments from evangelical Christian missionaries to remain Hindus.

Deshmukh says that apart from the 500-odd Hindu families in Nartiang, about 60 kilometers east of state capital Shillong, there are a few thousand Hindus in the rest of the East and West Jaintia Hills district.

The religious practices of the Pnars is an eclectic mix of their original Niamtre faith and many elements of ‘mainstream’ Sanatan Dharma.

This mix only reinforces the syncretic nature of Hinduism. The Pnars, or the Jaintias, are an Austro-Asiatic tribe that migrated from what is present-day south China to the Khasi & Jaintia Hills.

The ancient Jaintia kingdom which dates back to the 1st century CE (common era) used to encompass present-day Meghalaya, the Surma Valley of Sylhet in present-day Bangladesh and the Barak Valley of Assam.

Nartiang was the summer capital of the Jaintia Kings while Jaintiapur (a sub-division in Bangladesh’s Sylhet division) was the winter capital.

Jayanteswari was the presiding deity of the Jaintia royalty and a central figure in the Niamtre faith.

The Jaintia kings used to practise human sacrifice to propitiate Jayanteswari, their deity.

But they could not find any Brahmins from neighbouring Bangladesh or the Kamarupa kingdom (Assam) to preside over this ritual.

Thus, according to legend, they had to invite Deshmukh Brahmins from western India as priests.

The assimilation of the Niamtre faith into Sanatan Dharma and inter-mixing of rituals and ceremonies started sometime in the 16th century.

The Nimatre faith involved worshipping a Mother Goddess. This got assimilated into the Shakti tradition of Sanatan Dharma.

According to some scholars, the present-day Kamakhya mandir in Guwahati was once a sacred site revered by the Khasis and Jaintias and dedicated to the Mother Goddess.

It was known then as Ka Mei Kha, which the scholars say metamorphosed into Kamakhya.

The practice of human sacrifice continued at the Jayanteshwari shrine, which became a Durga Mandir after the Jaintia Kings embraced Hinduism, and was discontinued only after the British banned it in the late 19th century.

But many of the rituals practised today at Nartiang’s Durga Mandir are a blend of ancient Niamtre practices and Shakti traditions.

The Mandir has a opening on the floor through which heads of humans who would be sacrificed used to roll down to the Myntang river flowing below the hillock on which the Mandir is situated.

The hillock, which was once fortified, also used to house the royal palace.

Human sacrifice has now been replaced with animal sacrifice; goats and ducks are sacrificed on Maha Ashtami (the second day of the four-day Durga Puja).

On that night, a special sacrifice of a goat dressed like a human in a dhoti, with a turban on its head and with a human face mask is sacrificed in the sole presence of the priest.

Since the practitioners of the ancient Niamtre faith did not worship any Murtis, the tradition continues.

During Durga Puja, the trunk of a banana tree (known as kola bou in Bengali) is worshipped as Ma Durga.

The Pnars, or Jaintias, have a long tradition of worshipping different female deities.

Some of these deities are tellingly similar to Hindu Goddesses. Like, for instance, Goddess Lukhmi whose blessings yield a good harvest. It needs no imagination to make out that Goddess Lukhmi is the tribalized form of Goddess Lakshmi.

The Nartiang Durga Mandir is one of the three Shakti peeths in North East India, the other two being the Kamakhya and the Tripura Sundari Mandir dedicated to Goddess Tripureshwari at Udaipur near Tripura’s capital Agartala.

Like the rest of the country, August 5 will be a special day for Nartiang and its people.

Because a part of that town — a fistful of soil and a container of water —located 1,300 kilometers east of Ayodhya will become a part of Ram Janmabhoomi and the grand mandir dedicated to Bhagwan Ram.