The Lament Of Tamil Nadu: What Is Pongal Without Jallikattu? 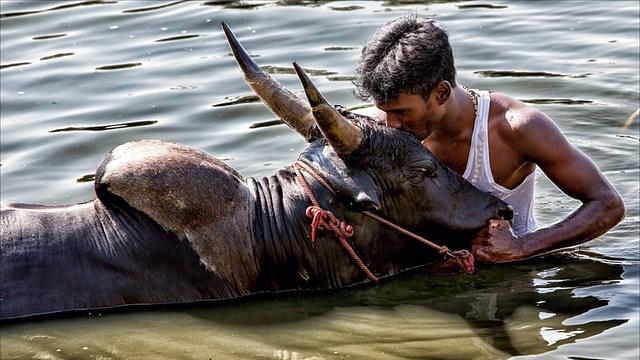 Is it possible to stage Hamlet without the Prince of Denmark? The people of Tamil Nadu, especially the rural folk, are caught in this dilemma. This is because Pongal, the harvest festival of the state, has lost its relevance and significance with the rural ‘bull taming’ sport of Jallikkattu, an integral part of the festivities, not being observed after an order from the Supreme Court.

The term bull taming itself is a misnomer. The centuries-old sport finds a mention in the Sangam era literature: featured coins (jalli in Tamil) in a bundle (kettu) that are tied to the horns of the bull. Youth showed their prowess and power by holding on to the hump of the bull with bare hands till the jallikattu is removed from its head. No weapons were used, and it was in fact, a friendly bout between man and animal. But in course of time, the term bull taming crept into the lexicon and it became the accepted name.

Tamil Nadu could be the only state in the subcontinent where the cattle, especially bulls, are worshipped during a festival. The week-long Pongal celebration has a day dedicated to the cattle called Mattu Pongal (maadu in Tamil means cattle). On this day, bulls and cows are bathed, smeared with turmeric paste, adorned with flowers and garlands and walked to the local temples, where the priests perform special pujas for the health and welfare of the animals, which are looked after like another member of the family.

During this festival, rural Tamil Nadu comes alive with Jallikkattu, which is a duel between well-bred animals and men. In the modern version of the sport, the bull is released into an arena, where the youth try to stop the charging animal for three to four seconds by holding onto its hump and that too within a marked area. The players are not allowed to touch any other part of the animal other than its hump. The winner walks away with a number of gifts and cash awards sponsored by the organisers. This used to be the story till 2014, not any more.

The Supreme Court in a judgment delivered in May 2014 banned the staging of Jallikattu on grounds of cruelty to animals. It also took into account the contention of the Animal Welfare Board of India and a number of NGOs which argued that bulls were being used for public performance. What happened is that neither the judges, who delivered the verdict, nor the petitioners, who describe themselves as animal lovers, knew what Jallikattu truly was. There is a widespread feeling in Tamil Nadu that the case against Jallikattu was the result of a plan to destroy the native Indian breed of bulls.

Dr S Kalyanaraman, director, Saraswathi Research Centre, Chennai, points out that bulls, cows and buffaloes were an integral part of the subcontinent’s civilisation, which dates back over 5,000 years. Seals excavated from the banks of River Saraswati and Mohenjodaro had pictures of bulls engraved on them. It is a proof that cattle and metal were part and parcel of the factors that contributed to the prosperity of India,” said Dr Kalyanaraman.

Ramakrishnan Gauthaman, director, Vedic Science Research Centre, Chennai, quoted profusely from Kalithogai, a great Sangam poetical work written during the 600 BCE to 300 BCE, to drive home the point that how cattle, especially bulls and bull fighters, were held in reverence and loved by women folk.

Stanza 103 in Kalithogai is a dialogue between the heroine and her friend, where the heroine explains the qualities needed in the ideal person:

Flowers from the mountains and forests,

Like mullai buds and tips of feathers, are on the

As they are on the platforms, a black bull with

A red bull the color of the twilight sky

A red one with large, curved horns

Resembling the crescent moon on the head of Siva,

The God of destruction, and other bulls fight with

The arena with fragrant incense

Crocodiles huddled together in a huge mountain’s

“This is a rough translation of the poem. There is no mention about the killing of bulls in this poem. The friend tells the heroine that the youth who tames the bull is the ideal bridegroom while the one who loses out would not enter even in the wildest of dreams of the heroine,” said Gauthaman.

He further stated that till date there is no record of any bull getting killed in the bouts.

Southern Tamil Nadu reverberates with the echo of the Jallikattu crowd during the months of January to May. If you think that the crowd and bull fighters are drawn from the rural folk, you are far off the mark. There may not be swanky cars or men and women in the latest designer clothes whom one comes face to face at racing events like Mumbai, Pune or Kolkata. But, one will come across US-based software engineers, bankers from Europe and financial consultants, doctors, corporate honchos all with roots in rural Tamil Nadu. Those with any doubts are advised to take a trip to Alanganallur, 15 km south of Madurai, which is the hub of all Jallikattu events.

For people in the southern districts of Tamil Nadu, Jallikattu is more than a festival. “It is an occasion for the annual village and family reunion,” said Arul Selvan, former executive officer, Arulmigu Muniyandi Swami Temple at Alanganallur. He said bull taming dates back to 2,000 years. “It is linked to Indus Valley Civilisation. The National Museum in New Delhi has displayed all relevant documents in the form of stone carvings,” said Selvan.

Deepal, a bull tamer of Karisalkulam village near Aanganallur, owns four bulls, each costing Rs 1.5 lakh and above. “It is a thrilling sport between specially bred bulls and the village youth. The fighter has to control and stop the bull which measures up to 6 feet,” said Deepak, He said, the bulls are brought up like children in the family. “Some of the activists saw us applying sindoor on their forehead when we took them to the temple for the customary puja, the activist blew it out of proportion by alleging that we put chilly powder in the eyes of the bull,” he said.

Tom Willoughby, a septuagenarian US businessman, had been literally thrilled by Jallikattu. “This is similar to Rodeo performed by cowboys in western USA. It is known as bull wrestling and is a more structured sport,” said Willoughby, a former corporate executive touring Indian villages. Konrad Liegeder, a German tourist, said it was the people’s behaviour which attracted him more than the sports. “There is an invisible attachment between the bulls and the fighters and it is interesting,” said Liegeder.

These factors have contributed to Jallikattu making its way into Tamil films. It has been a subject of films starred by yesteryear superstar Sivaji Ganessan to modern day mega stars like Rajnikanth and Kamal Haasan. The 1959 biopic Veerapandya Kattabomman directed by B R Panthulu with Sivaji Ganesaan in the lead had Jallikattu as part of the plot. The heroine had vowed to marry only the youth who tamed her pet bull in a Jallikattu event.

Who are the people behind the plan to sabotage the Jallikkattu? If the general feeling in Tamil Nadu is any indication, the people of the state are unanimous in their demand for continuing Jallikattu. “This opposition against Jallikattu is an imported ideology. It has its roots in the corporate offices of multi national corporations engaged in dairy business. They have a lot to gain from this banning,” said Gauthaman.

Tamil Nadu was home to nearly four dozen varieties of native bull breeds. They could survive in the extreme weather conditions of the state with the available grass, fodder and home. “As part of livestock development, the central government took initiatives to import high yield varieties of cows and bulls to India. This led to the annihilation of native bull breeds,” said Shyam Kumar, avid collector of native breed of cows and bulls based in Kerala’s Kollam. He said that the rules and regulations enforced as part of increasing the milk yield under the pretext of White Revolution led to the extinction of native breed of bulls.

“The policy makers were under the impression that insemination with imported bulls could lead to an increase in the milk yield. Hence most of the native breed bulls were slaughtered and in course of time they became extinct,” said Kumar. Tamil Nadu’s lead breeds are disappearing one by one and it is a matter of time when they become total extinct. “The Jallikattu ban is a sure recipe to this kind of annihilation”, said Gauthaman.

Ramakrishnan Gauthaman highlighted one particular perspective of this rural sport, which has hitherto been ignored by many proponents. “This is a time of the year when the entire rural population comes together irrespective of caste, creed, religion and economic barriers. We can feel that special camaraderie and oneness among the population in these regions which are otherwise known as communally sensitive areas. Jallikattu is a factor which bonds these sections and that makes it a unique event,” he said.

Rural Tamil Nadu resembles a burial ground without its Jallikattu and bulls. The youth in this state wear a dejected and disappointed look. The ambience is similar to staging the play Hamlet without the Prince of Denmark.