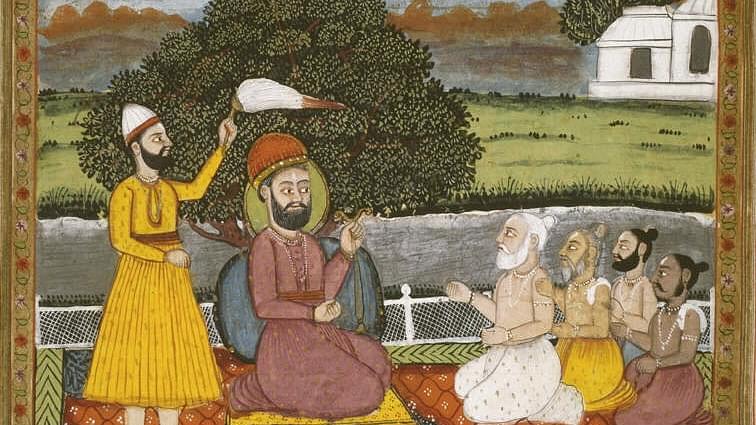 Establishment historians of India have always had a problem with Sikhism. Sikhism stands out as an egalitarian movement, rooted in Indic spirituality and chronicles and meticulously portrays the religious persecution suffered by Indian people. Some historians with their Marxist-M.N.Roy axiom say that monotheism is superior to Indic spirituality and have always tried to minimize as much as possible the importance of Sikhism in the Indian national movement. So, they categorize Guru Nanak as a monotheist under Islamic influence and the Sikh movement as a subaltern movement that can be explained best through leftist-Marxist equations.

Romila Thapar in her A history of India, makes Guru Nanak almost a Sufi apostate:

Nanak came of a rural background, being the son of a village accountant. He was educated through the generosity of a Muslim friend, and later was employed as a store keeper in the Afghan administration. In spite of having a wife and children, he left them and joined the Sufis. But after a while he left the Sufis and travelled throughout the sub-continent; he is also believed to have visited Mecca. Finally, he rejoined his family and settled in a village in Punjab, where he preached, gathered his disciples, and eventually died.

Prof Thapar makes Guru Nanak a person totally influenced by almost nothing else but Islam. She states further that Nanak ‘described God without references to either Hindu or Muslim conceptions.’ According to her, Nanak derived his concept of God ‘from the two existing religious forces.’

Far from being a simple synthesis of or equidistant from, both Islam and Hinduism as alleged by establishment historians, Guru Nanak represented a spiritual and civilizational engagement of Hindustan with the consequences of an expansionist religion. This simultaneously involved, stopping proselytization, having a dialogue with those converted and building social institutions to meet the challenging times. A divine-intoxicated poet-visionary, Nanak viewed the Existence and history from that state of consciousness and expressed it through the traditional imagery of Indic religion and mythological framework.

An encounter with the Invader

Guru Nanak lived in a province that was a battle field of the invaders. He had been the contemporary of five Islamist monarchs in India - Bahlul Lodi (1469-89), Sikandar Lodi (1489-1517), Ibrahim Lodi (1517-1526), Babur (1526-1530) and Humayun (1530-1539), the last two being Mughals. Though he named and criticized Babur, he found the rulers, Lodis or Mughals, as unrighteous and tyrannical. In the Lodi Sultanate, Hindus had to pay pilgrimage tax and Nanak refers to this customary tax on deities and temples:

And the Gods and temples have been taxed: such is the current way!

The ablution pot, the prayer, the prayer-mat, the call to prayer, have all assumed the Muslim garb.

He saw the cruelties of the alien rulers first hand and lamented the imposition of their way of life on the natives of India. He lamented the fall of India. For that he used in his poetry, the concept of ‘Kali Yug’ or times of degeneration and depravity:

The Kali age is the knife; the kings are butchers,

And justice has taken wings

The darkness of falsehood is abroad,

And one knows not where arises the moon of Truth.

The subjects are blind and submissive.

The encounter which Guru Nanak had with Babur, the invading Mughal, has been recorded in crisp verses now known as Babur Vani. Guru Nanak was returning to Punjab from Baghdad and had observed the recruitment undertaken by Babur for his invasion of India. At Sayyidour, a place (now in Pakistan) north-west of Lahore, he witnessed the massacre of the local population, mostly Hindus, by the invader. He called the army of Babur, 'a bridal procession of sin': 'Modesty and Religion have vanished; falsehood marcheth, O Lalo' he cried. While Guru Nanak never hesitated to point out the specific religious persecution Hindus underwent, he also sang the plight of both Hindu and Muslim women, who did not escape the fury of Babur’s forces.

As against such atrocities of the Turks and Mughal rules, Sikh religion put as the ideal the rule of King Janak. The Adi Granth upholds Janak as the ideal ruler - one who is immersed in the true knowledge - a Vedantic king. Sikh Gurus were compared to Janak. There are Sikh traditions (like the Miharvan) where Guru Nanak is considered as Janak who had come to earth to establish righteousness.

When asked about the origin of the universe, Guru Nanak replied:

In the beginning there was utter darkness and chaos upon chaos

There was neither earth nor heavens

Nay nothing but the indescribable Divine Will

Neither was there day nor night; neither sun, nor moon

Only the Divine reflecting Himself in the Void;

There was neither wind; nor water; nor speech; nor the resources of creation;

Neither creation; nor destruction; neither coming nor going;

No seas; no rivers; no continents; no hells; no paradises;

Neither Brahma; Nor Shiva nor Vishnu; but only my Divine

No rituals; No penances; nor the sacred scriptures; nor incantations; nor the ways;

No caste, nor pride; neither life nor death;

He shaped the universe - out of the un-manifested, immovable ground of His Being,

He made Himself manifest to us and within us,

He created the Existence we see and believe

The readers can see in it the echo of the famous so-called creation hymn of Rig Veda. The cardinal point to Nanak’s world vision is his rejection of the existence of evil. Nanak reveals in his 'dawn hymns' that it is the Divine Himself who mixed desire, duality and delusion.

Prof Nikky-Guninder Kaur Singh, in her study of Khalsa, points out that the Islamic concept of 'oneness' which penetrated India was in conflict with the 'oneness' experience of Guru Nanak:

But the Western idea of oneness could not accept the polyphonic imagination of Hindus, Buddhists or Jains. Guru Nanak vehemently denounced the exclusivity of the Muslim conquerors. When Allah was projected as the only way to read the Divine, or the Qu’ran as the only sacred text, or the mosque the only sacred space, he reacted strongly. In a feminist voice Guru Nanak harshly rejects those who force their way on others, those who reduce the richness and variety of routes by imposing their own narrow path. His protest became a manifesto, a call.

There is an astonishing continuity of geo-cultural space and Vedic times in the religious imagery and terms of Guru Nanak. Kushwant Singh in his 'Hymns of Guru Nanak' explains:

The Sanskrit Brahman became Nanak’s Brahma and he invested Brahma with a dual role. Before Brahma created the cosmos, He was parabrahma (supreme Brahma) in a state of deep trance and was above all qualities: nirguna. Brahma came out of His trance and created the world. Although He still remained nirankar (without form), He now became saguna - repository of all qualities. ...God is like one large lake in which blossom many varieties of water lilies. Nanak’s God pervades His cosmos. ... Despite his incomprehensibility, Nanak’s God is a good, warm and friendly God. ... Call him as you like; Allah, Rab, Rahim, Malik like the Muslims; or Rama, Govinda, Murari, Hari as does the Hindus; Nanak however called Him Aumkar. Taken from the Upanishads, the mystic syllable Aum is said to contain all the consonants in the range of human voice and hence, ‘all speech’ and thus becomes the perfect word to represent God. ‘As all parts of a leaf are held together by a central rod’, says the Chandogya Upanishad, ‘so all speech is held together by Aum.’ Nanak describes Aumkar as the ‘Creator of Brahma, Consciousness, time and speech and the Vedas; the emancipator and the essence of the three worlds.’

As one can see, despite the deficient term ‘monotheism’ used to define the concept of God in Nanak’s vision, (that Kushwant Singh also uses) what Nanak put forth has continuity with the Upanishadic vision, adapting itself to the challenge of the expansionist monotheism of Islam. The relation between creator-deity and Aum in Guru Nanak in a subtle way reflects the popular south Indian mythological tale of Skanda-Muruga where Murugan imprisons Brahma the creator, when the creator God forgets that it is Aum - the sound symbol of consciousness that is the basis of all existence. Interestingly, during the freedom struggle, Tamil poet Bharathi sang on Guru Gobind Singh to rouse Tamil people against the British rule.

The subsequent struggles between Mughals and the Sikhs are grounded in this basic clash of Indic spirituality and organized expansionist religions. It is exactly this conflict that some historians try to negate through devious means. So when the class XI history textbook prepared by historian Satish Chandra discusses the martyrdom of Guru Tegh Bahadur, it makes a point to include 'the official Mughal version' of the execution which blamed the Guru for extortion of money. Then the Marxist historian faithfully added what he called the 'Sikh tradition'. And guess what the 'Sikh tradition' had to say about the martyrdom of Guru Tegh Bahadur: "According to Sikh tradition, the execution was due to the intrigues of some members of the family who disputed his succession and by others who had joined them."

The intentional belittling and distortion of Sikh tradition by some historians is the result of an inherent inability in the establishment historiography to understand the social dynamics of Indic spirituality.