The Unbroken Tradition Of 'Rajatarangini' 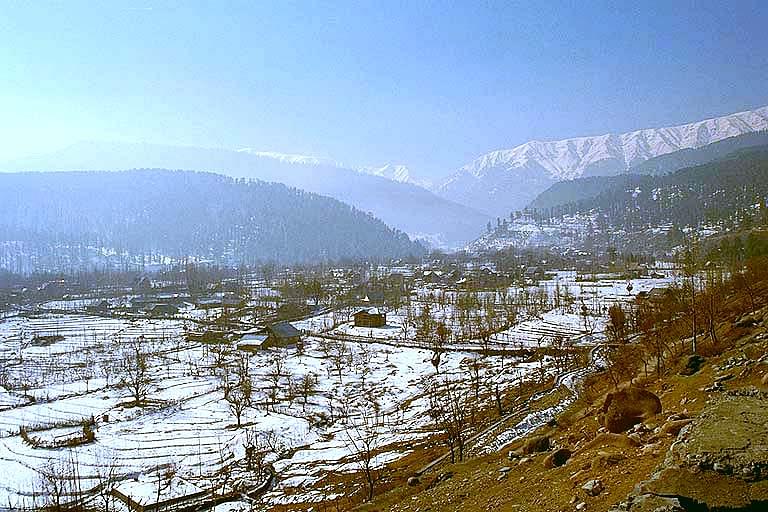 An unbroken chain of poetic tradition in Kashmir traces it’s roots to that seminal work of Sanskrit poetry—Kalhana’s Rajatarangini.

It appears that a pair of halves of their (Siva and Parvati’s) bodies, embarrassed by their desire to compete and win, have dissolved into the three worlds, in which they are revered.  The remaining pair, united in friendship like the competing desires of two sides to win, may bless us with the wealth of unison (Advaita).

Thus begins Jonaraja, his monumental work called the ‘second Rajatarangini’.  He wants to be seen as continuing a tradition (albeit two centuries later), with an invocation to the same deity, Ardhanareeshwara, as his illustrious predecessor, Kalhana.  Jonaraja also pays tribute to the best of Indian poetry, as he begins his work in fashion identical to Kalidasa’s in Raghuvamsha.  From the use of the indeclinable ‘क्व’ to the description of crossing of waters and to the description of his own work as that of a ‘binding thread’ (सूत्र).

Jonaraja, in his work, provides precise details about himself and his time.  He was the son of a Nonaraja and grandson of Laularaja (verse 1034 from Rajatarangini).  He was from the fifteenth century and was the court poet of King Zainulabidin.  Dr. K S Nagarajan, points to the quality of the commentary of Jonaraja on Bharavi’s Kiratarjuneeyam and Mankha’s Srikanthacharitam to attest to the learned abilities of Jonaraja.

Jonaraja’s work was continued by Srivara Pandita, his disciple, in what is called the third Rajatarangini.

The moon, adorning the forehead of Siva, merged half his body with the dark night of Parvati’s plaits, emulating his master Siva. Let the Ardhanareeshwara with his body split into two parts bestow upon us the feeling of unity.

The tradition of paying homage to Ardhanareeshwara continues, and Srivara ehnances the feeling of unity and separation inherent in this form, right of the bat.  He too uses similar word-play as Jonaraja to pay tribute to Kalidasa.  Whether Kalidasa was from Ujjain or Kashmir or some other part of the country, Kashmiri poets like Jonaraja and Srivara seemed to consider him their patron-poet.

Srivara was recepient of the patronage of three successive rulers, Zainulabidin, his son Hyder Shah and grandson Hasan Shah, in the fifteenth century.  Dr. Nagarajan notes that this coincided with the brief rule of Sultans, who were independent of the Delhi Sultanate and showed great interest in Valmiki Ramayana, YogaVasishta, BrahatKatha, Puranas and Dharmashastras.

Srivara was considered proficient in music and provides a detailed account of music during the time.  Dr. Nagarajan lists a number of popular ragas like KedaraGauda, Karnata and Gandhara, as referenced by Srivara.  His work is embellished with descriptions of famines, floods and festivals by the great lakes.

Srivara is also known for Katha-kautuka and Subhashita-vali.  Katha-kautuka is an epic in fifteen cantos and is an adaptation of a Persian romantic piece, Usufzulaikha.  Dr. Nagarajan comments that Srivara shows how to bring about a synthesis of the best of Persian and Sanskrit traditions. Subhashita-vali is an anthology quoting more than 400 poets and is an important work from a catalogue stand-point too, as it references works and authors not as well-known.

Prajya Bhatta and Suka were historians from the 16th century Kashmir, who together wrote Rajavalipataka or the fourth Rajatarangini, continuing in the tradition of Srivara.  Suka was a disciple of Prajya Bhatta.  Their work starts from where Srivara left and concludes with Akbar’s annexation of Kashmir.  The tradition of Ardhanareeswara stotra is continued, as the singular use of Kalidasiya phrases pointing to the continued style of paying tribute to previous generation of authors.  Interestingly, the first shloka has a phrase similar to the one used by Anandavardhana in his epochal Dhvanyaloka, in perhaps a tribute to that great Kashmiri genius.

Dr. Nagarajan notes a significant difference in the first half of this work to its second half and points to the annexation of Kashmir and related troubles as reasons for the second half being a very confused account.  Verses 885-889 clearly point to the impact of the Mughal era religion-based taxation system, where only the ones with wealth could afford to pay the higher taxes and save their religion and others forced to flee such rule, forcing the end of Sanskrit and scholarship in Kashmir.

Western scholars consistently point to a lack of ‘historical’ works in the style understood by them in ancient India and thereby in Sanskrit.  Kashmiri poets like Kalhana, Jonaraja, Srivara, Prajya Bhatta and Sukra have shown the existence of such style of chronicles in Sanskrit.  After starting this journey of chronicling some of our great poets of Kashmir on a ‘historical’ footing, we will journey to take a peek at the classical poets of Kashmir.

Part one of the Kashmir heritage series can be read here : A Look At Kashmir’s Literary Heritage