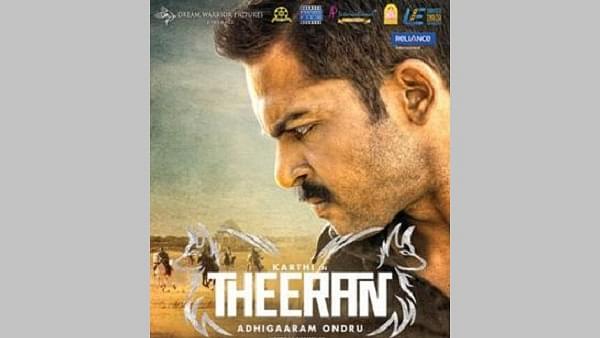 Theeran Adhigaaram Ondru is a recently released Tamil film that is loosely based on Operation Bawaria, which was conducted by Tamil Nadu police in coordination with Uttar Pradesh police and national intelligence agencies more than a decade ago, in 2005.

During this period, isolated houses along the national highway were targeted. Not just Tamil Nadu but also neighbouring Andhra and Karnataka had their share of incidents. The murders of Dravida Munnetra Kazhagam (DMK) leader Gajendran and Congress leader Thalamuthu Natarajan of Salem were also said to have been committed by the same group of dacoits.

The operation was conducted by a special team which was led by S R Jangid, known across Tamil Nadu for his tough and no-nonsense approach to crimes. He was then inspector-general of police for the north zone, Tamil Nadu. The makers of the film have taken the pain to consult with the police officials and tried to make a film which tells the story of an operation which was successful in arresting Oma Bawaria and Ashok Bawaria, apart from the ‘encounter killings’ of Bsura Bawaria and Vijay Bawaria.

The movie nevertheless is quite hero-centric, with the essential opiates of all Tamil movies – a fair-skinned heroine, duets, romantic life of the hero leading ultimately to the sacrificial coma of the heroine as she faces a brutal attack from the chief dacoit.

The police operations, which are usually a well-coordinated team play, here become restricted to the achievements of the hero and hero alone, while other policemen are depicted as below-average and mediocre professionals who merely take orders. Then, to expect anything better from a regular action thriller of the police type in Kollywood or Bollywood should be considered a heinous superstition punishable by all laws. Just relax, enjoy the movie. Fly with the romance, feel the thrill from the action, cry for the heroine if you are the emotional type, and then salute the brave police officials shown in the film and return home. So far, so good.

However, problem arises when the movie takes a turn towards depicting the history of the gang and ties it with the colonial narrative of thuggees and criminal tribes. ‘Kuttra Paramparai’ or hereditary criminals is a colonial construct that emerges throughout the ‘research’ that our hero conducts on the movement of the gang. As the investigator of crimes turns into an anthropologist for the viewers, the screen speaks highly of William Henry Sleeman (1788-1856) and even blames, in the colonial fashion, Indian kings for encouraging the communities of highway robbers.

A point comes when the movie repeats the names of the communities which the British had decreed as ‘criminals’ in nature. Interestingly, the words ‘Kuttra Paramparai’ itself has been edited out because certain communities which are dominant in Tamil Nadu have bitter memories associated with CTA.

In Tamil Nadu, it was Pasumpon Muthuramalinga Thevar, the legendary nationalist leader, who took the fight to the CTA. In 1934, he organised a convention urging the authorities to repeal the CTA. He formed a committee consisting of himself, P Varadarajulu Naidu, a Congress nationalist who would later become Madras Hindu Mahasabha leader; Perumal Thevar, Sasivama Thevar, and Navaneethakrishna Thevar. Not only did the then ruling Justice Party (the precursor to today’s Dravidian parties) not revoke the Act, it widened its implementation. At an all-India level, the tallest of the Hindu Maha Sabha leaders, Veer Savarkar, met the tribal leaders of Pardhis, branded as ‘criminal tribes’ during his whirlwind propaganda. The Hindu Maha Sabha publication of 1941 says they “were most unjustly tabooed as a criminal tribe”.

It is interesting to note that from the Aryan race theory to criminal tribe anthropology, the Indic resistance to the racism of colonial social science projects has always been consistent in denying the racial categorisation and stereotyping of the tribes.

Unfortunately, the film’s makers seem to have been more swayed by the colonial discourse rather than the reality of Indian society. The problem that the words 'Kuttra Paramparai' carries in Tamil Nadu has made the film makers issue a statement as well:

The film’s intention was never to depict any single clan in a bad light. No community exists and thrives only on murder and robbery. However, since a section of people have taken offense, we, on behalf Theeran team, apologize and confirm that the controversial scene and the word used to describe Bawariya community will not be included with immediate effect in theatres and in television broadcast as well.

Yet the film remarkably does that. It characterises an entire community and village as well as educated members of a denotified community as all being part of a hereditary crime gang. By repeatedly showing the purported historical roots of a community and linking it to the present-day crimes of a gang of a few individuals, the film shows a nomadic community in Rajasthan as ‘habitual or hereditary’ criminals.

It is important to note that CTA was part of a whole series of laws which then the West so casually implemented on societies and human communities around the world. During the colonial period, the severed heads of the so-called dacoits were sent to England, where the colonial British doctors anticipating the Nazi doctors later studied the severed heads and pronounced judgement on the character of ‘Hindoo types’ lacking moral conscience and inherent tendency towards criminality.

Consider this statement of James Fitzjames Stephen, the law member of the governor-general of India’s council in 1871:

... a tribe whose ancestors were criminals from time immemorial, who are themselves destined by the usages of caste to commit crime, and whose descendants will be offenders against the law, until the whole tribe is exterminated or accounted for.

Theeran Adhigaaram Ondru not only romanticises the encounter killing and capture of the dacoits by the Tamil Nadu police; it also plays into the racist prejudices against Indic nomadic communities which have been so deeply enshrined in the colonial legacy of the British-Indian police system.

Had the movie shown just the hardships, the networking between various agencies, interstate cooperation between the state police departments, the problems and even the battle within the police to overcome the stereotypes about our nomadic communities sown by the British colonial vested interests even as the police officials succeed in capturing and battling the criminals, the movie would have made us proud as both Tamils and Indians.

Unfortunately, this is a movie that dangerously reinforces the colonial prejudices with a hint of elitist chauvinism. A scene shows the cerebral and brawny hero speak about the ‘prisoner's dilemma’ game and the police officer accompanying him could not even pronounce the word ‘dilemma’. The hero seems to be the brown-skinned descendant of Sleeman.

Even a romanticised depiction of the real police world with all its inner problems of colonial legacy, corruption, prejudices and its conflict with the Indian reality and a humane quest for justice, still eludes the Indian silver screen. Meanwhile, juvenile cowboy heroes in police uniforms hunt Indic communities based on inherited British frameworks when they are not hip-gyrating with their fair-skinned heroines around the trees. Goodness save the nation and her tribes if in real life the police officers in today’s India see Sleeman as their hero!