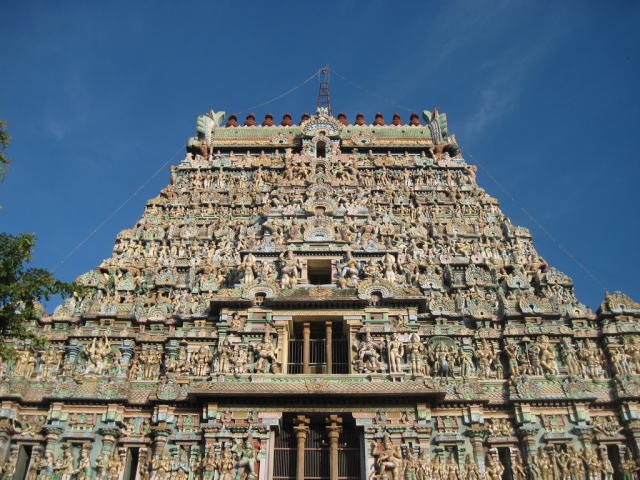 Of the illustrious Vaggeyyakaras, who have enriched our musical heritage by their sterling compositions, the name of Tyagaraja stands unique in many respects. He was a rare combination of a saint, a poet and a composer. His unique versatility, which is reflected in his kritis, stress the importance of Bhakti, which alone would help an individual to attain salvation. He chose the vehicle of sangita, for conveying his teachings, thus demonstrating its noble purpose. In this respect he followed his predecessors, Purandaradas, Ramadas, Tukaram, Tulsidas, Meera and Kabir.

Tyagaraja was one of the greatest composers of Carnatic music. He lived his intellectually formative years in Tiruvaiyyaru, which he describes in his kriti, Muripemu Kalike Kada, in Mukhari. He drank deep at the fountain and from his kriti, we learn that he had mastered the rare musical treatise, Swararnava, stated to have been given to himby Sage Narada.

He also attained good proficiency in Sanskrit, the Vedas, Itihasas, Puranas the Upanishads, and Agama Sastras. These attainments account for his command of the language, the aptness of the imageries and the allusions he uses in profusion in his pieces.

Tradition has it that he composed 24,000 pieces (to correspond with Valmiki’s 24,000 slokas of the Ramayana), which though is a prodigious number, is not impossible, considering the fact that he lived to a ripe old age of 81, and is believed to have poured out his heart every day at least in two new songs. We are now left with about 800 pieces; the rest being irrecoverably lost. It is likely that a good deal of the compositions of Tyagaraja was lost by not being properly recorded and even those recorded, being not properly preserved.

The flow of Tyagaraja’s music, like the flow of the river Ganga, is majestic, serene and perennial. There is no word in his kritis that fails to express his unalloyed devotion to the Lord, just as there was no moment in his life without Rama’s name on his lips. His love of Sri Rama was spontaneous and intense. At times he was the child of Rama and Sita, craving for their affection, and tenderness. Sometimes he was Dasaratha or Kausalva doting on the child and lavishing on him all the affections of a parent. At other times he was like Hanuman, the Lord’s most trusted dasa or like Lakshmana, always at the service of the Divine Couple.

But in many moments of introspection the saint composer realised how small and helpless man was, and completely surrendered himself to God.

When Tyagaraja went to Tirumalai to worship Balaji, he could not have the Lord’s darshan. A curtain was hung in front of the Lord. Tyagaraja thought within himself that what prevented him from seeing the Lord was not the curtain in front of him; the real curtain was within himself. It was the curtain of ego, of jealousy, of greed and of lust. He sang a beautiful kriti praying to Lord Venkatesa to remove this curtain from his mind. The priests soon realized that a great bhakta had come and at once removed the curtain in front of the Lord. Dazzled by the effulgence of Balaji, Tyagaraja sang in ecstasy that “to worship Lord Venkatesa one needs ten thousand eyes“.

Thyagaraja lays particular emphasis on concentration, devotion, understanding and a heart free from material aspirations during prayer. Tyagaraja holds that it is only our service to the Lord which leads to real and perennial happiness.

The unique comfort derived from chanting the name of Sri Rama is superior to the relief and satisfaction a cup of water can afford a thirsty man; a huge treasure to a man in dire poverty; of ray of hope and courage to a terrified man seeking refuge; delicious rich meals to a hungry man; composure of mind to a man of unlimited loose temper; dawn of wisdom on a dullard and also to the quietude of a seer. Only a true devotee (like Tyagaraja) knows the quality and measure of such a joy. Not all get this comfort, but only he who yearns for it.

Tyagaraja has bequeathed to the music world, three beautiful geya natakas, Prahalada Bakthi Vila yam, Sita Rama Vijayam and Nowka Charitram. A point to be realised here is that the raga nomenclature and its derivatives of the Tyagaraia and post-Tyagaraja school of composers follow the sampuma mela paddhati, unlike the school of Venkatamakhi, which follows the asampuma mela paddathi. The fact that the kritis of Tyagaraia emerged as a combined matu-datu stream, invested them with a special fragrance and lent a special charm. It is the primary duty of the vidwans to render them in their authentic form and of music- lovers to demand such high standard from the performers.

The dignity, grandeur, beauty and erudition of Tyagaraja’s compositions are incomparable. Like the ancient Vedic chants, the sound of Tyagaraja’s raga alone is said to have a mystic power on people’s minds.

Tyagaraja’s kritis are like a limitless ocean and they have an eternal, universal appeal.

This piece was first published in the January 8, 1977 edition of Swarajya