Vande Mataram: A Song That Transcends All Languages 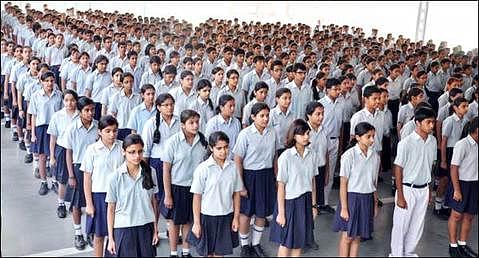 In a recent order, the Madras High Court made an extraordinary appeal to the educational institutions of Tamil Nadu. It said that Vande Mataram must be played and sung once a week in all institutions and once a month in factories and offices. Predictably, the literati and a section of the media are up in arms against the order.

Why should the Tamils be compelled to sing a Bangla song, rhetorically asks Garga Chatterjee, a PhD holder from Harvard and commentator on political affairs of South Asia on many left wing portals. Chatterjee says.

India’s national song is Vande Mataram, with a “V”. However, in its original part-Bangla and part-Sanskrit form, written by Bankim Chandra Chattopadhyay and featuring in his seminal work Anandamath (1882), it was Bande Mataram with a “B”.This was how it was pronounced as such for about 50 years, before the song became popular in the Hindi belt. And just like all things Indian after 1947, the Hindi belt’s mispronunciation became the official format for the national song of the Union.

That was in March 2017. Now, with the Madras High Court order, the scholar writes again, this time, in Firstpost:

Earlier, such mandatory singing of certain songs or making certain postures was largely limited to Hindi-belt politicians of the Hindutva ilk. Now the judiciary seems to like what these Hindi-belt Hindutva-types have preached for long. Whether that is purely coincidental after 2014 is not something on which I would be able to speculate.

Note the idea that Vande Mataram was famous only in the Hindi belt and that attempts are being made to impose it in South India only after the present government assumed power. Also note the repetition of the idea that Vande Mataram was being mispronounced and that it is only a song limited to the ‘Bengal nation’. What never fails to amuse me endless is the utter ignorance of the history and culture of South India these scholars exhibit, except their mouthing of a few pious academic stereotypes about Tamils being distinct Dravidian aliens. Tamils have a long and well cherished emotional relation to the song Vande Mataram.

Interestingly, the Tamils’ relation to the song also has its bearing on the specific contention of the Harvard scholar that for 50 years it was only known as ‘Bande Mataram’ before it became popular in the Hindi belt. It was originally published in 1881-1882. So the 50-year mark is clearly 1930. Before that it was known only as ‘Bande Mataram’ and was only a song for the ‘Bengali nation’?

In 1896, it was sung in the Congress session by poet laureate Rabindranath Tagore. At least by 1907, we know that it had been already translated into Tamil by none other than Subramania Bharathi, the most popular poet of modern Tamil literary movement and the face of modern poetry. What is interesting is that during the translation, Bharathi took care to update the population figure mentioned in the original composition. From seven crore it became 30 crore post translation. The song has become the national song of India breaking any linguistic barrier if at all it was bound by it.

In 1908, Tamil Nadu saw the eruption of workers strike in Coral Mill in the port city of Tuticorin. It was one of the earliest organised mass movement of Indian workers against the British economic exploitation of India. Reports filed by journalists as well as the CID department highlight the role of Vande Mataram in the agitation. The striking workers, numbering about thousand, marched in the streets shouting ‘Vande Mataram’ reports Times of India (7.3.1908). Chirkin, who was an official at the Russian office in India, had sent some reports to Czar Government covering the strikes. They also reported the reciting of Vande Mataram. People surrounded the British personnel in the streets and compelled them to say Vande Mataram says the report. This happened not in North India, but southern Tamil Nadu and much before the ‘fifty-year’ period. Even South Indian students were stirred by Vande Mataram. The Hindu dated 5.3.1908 reported that a police officer was suspended for 10 days because he failed to stop the students from shouting Vande Mataram at a police official. We see a very clear Devanagri Vande Mataram (not Bande Mataram) in the cover of the Tamil magazine Vijaya run by Bharathi, where Bharat Mata is also featured.

The popularity of Vande Mataram among Tamils can be gauged by an interesting small event. In 1911, a barrister from Gujarat wrote a small note in Tamil enquiring about the ailing mother of his Tamil friend. He ended the personal note with Vande Mataram and then signed his name - ‘M.K.Gandhi’, and that was well before 1930 and needless to say that neither the barrister nor the recipient of the letter was from the ‘Hindi belt’. Gandhi carried on his practice of ending his letters wishing Vande Mataram almost until the end of his life even when he did not want any national symbol to be forced on anyone.

Those who never get tired of reminding us that poet and philosopher Sri Aurobindo in his translation called ‘Bande Mataram’ termed the song the ‘national anthem of Bengal’. But they never bother to look into the whole picture as the very same Sri Aurobindo in 1907 wrote about Bankim Chandra Chatterjee describing Vande Mataram as the “great song which has become the national anthem of United India”. It is unfortunate that the western or the shallow secular educated elite of this nation are utterly unable to understand that there is no schism between seeing any language of India as the mother and the nation as the mother.

It is not an accident that Indians have a spontaneous propensity to visualise their languages in maternal feminine imagery. It complements the way they see the entire nation and ultimately the whole world as the divine feminine. That is why Bharathi was able to easily move between the poetic salutations of Mother Tamil and Mother India. That even the Harvard educated elite are unable to grasp this historical cultural legacy of this land is another reason why from the school level we need to teach not only to recite Vande Mataram but also imbibe its spirit in the holistic cultural context. That is the spirit of the Indian nation which comes to us from the very dawn of civilisation.

And then there is the modern Indian State. After Independence, none other than India’s first prime minister Pandit Jawaharlal Nehru, in a historical statement on the floor of the Parliament made the feelings of the founding fathers of the Modern Indian state regarding Vande Mataram very clear:

It is unfortunate that some kind of argument has arisen between ‘Vande Mataram’ and ‘Jana Gana Mana’. ‘Vande Mataram’ is obviously and indisputably the premier national song of India, with a great historic tradition, and intimately associated with our struggle for freedom. ... The composition consisting of the words and music known as ‘Jana GanaMana’ is the national anthem of India, subject to such alterations in the words as the Government may authorise as occaion arises, and the song ‘Vande Mataram’, which has played a historic part in the struggle for Indian freedom, shall be honoured equally with ‘Jana GanaMana’ and shall have equal status with it. (Applause)

In these words of Nehru is the embodiment of the spirit of the modern Indian State which bows in reverence to the very substance from which it derived its very existence, Mother India – the ancient nation with all diversity.

Has she a billion faces

One organic being is she

Talks in languages many she

Her soul-beat is ever one