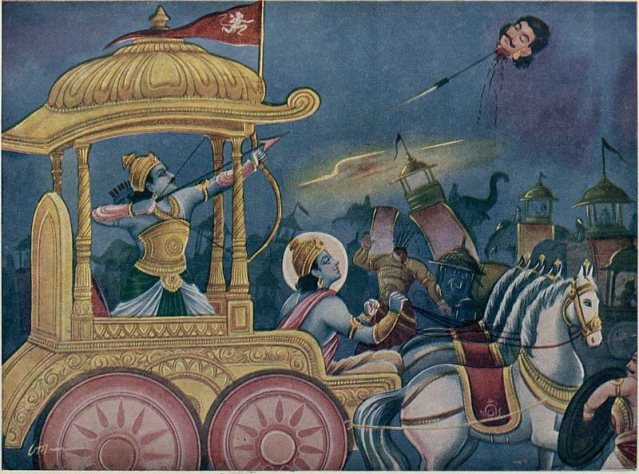 Attempted fratricide, attempted suicide – a bizarre turn of affairs on the seventeenth day!

Krishna may have uttered the most profound 800 shlokas ever at the beginning of the war (Bhagvad Gita Parva). He was successful there – Arjuna picked up his weapons, and the rest, so to say, is history. His words however failed to prevent the war itself. His visit to Hastinapura (Bhagavat-yana Parva in the Udyoga Parva), as a last resort to get Duryodhana to cede to the Pandavas at least five villages did not yield the desired results. Krishna was successful on at least two other occasions in preventing needless violence, once against Arjuna and once against Bhima – but that’s another story for another day and time though. Happily enough, Krishna’s war prevented at least one fratricide during the war itself – between Arjuna and Yudhishthira!

I had written about how Yudhishthira had angered Arjuna enough for Kaunteya to “angrily grasp his sword.” Why? Did Yudhishthira ask Arjuna to give away, abandon, his Gandiva?

Yes, there is one line in Ch. 48 in the Karna Parva that has Yudhishthira telling Arjuna – “Had you given the bow to Keshava and become his charioteer in the battle, then Keshava would have slain the fierce Karna…” This was on top of insult upon insult that Yudhishthira had already heaped upon Arjuna. Patience had been running thin for both warriors, and Arjuna had now unsheathed his sword.

But was Krishna a mute spectator to all this? Yes, so far in this fracas between the two brothers. But not any longer. Not when things threatened to well and truly get out of hand. Mischievously, he told Arjuna that this was a “time for rejoicing”. Why? He had come seeking Yudhishthira, who was “cheerful and well.” Furthermore, Krishna could not “see anyone here who should be killed by you.” “What do you wish to do?”

Arjuna replied that he had taken a vow that “If anyone asks me to hand over Gandiva to someone else, I will slice off his head.” Fair enough. Arjuna had a penchant for taking oaths in haste and acting them out in leisure. This was a lament that Krishna had with the Pandavas right to the end of the war. But a vow was a vow.

Arjuna had possibly realized the silliness of his vow and the serious implications of acting it out, because he now told Krishna that he would do “whatever you ask me to.”

Krishna had to walk the tightrope between not negating Arjuna’s vow on the one hand and not having one brother kill another on the other – there was enough of that already happening on the battlefield. Krishna had to first explain to Arjuna that like everything in life, even the truth had its subtleties. “There is nothing superior to truth. However, it is extremely difficult to understand how one should base oneself on truth. Sometimes, truth should not be spoken. And sometimes, a lie should be spoken. … One should also utter a lie when one’s life is in danger, or at the time of a marriage. … A person who is always based on truth is but a child.”

Politely put, it was juvenile to be “always based on truth.”

Krishna also remarked that “many other people who hold that dharma is only what is the sacred texts. I will not contradict this, but everything is not laid down there.” These were stunning words, the import of which has been missed by many – the Lord himself was saying that it was not wise to go by the book at all times and to treat what’s written as set in stone!

So, coming back to the problem at hand, what was the solution? A beheading was ruled out, and even Arjuna by this time had realized the enormity of his statement, plaintively pleading to Lord Krishna for a via-media – “If I kill him, I will not be able to remain in the world of the living even for a short instant. …  Tell me how my pledge remains true and yet, Pandava remains alive.”

Krishna’s solution was both simple yet elegant. He asked Arjuna to offer Yudhishthira a “trifling insult. O Partha! Address the king as ‘tvam’. … Having been thus addressed, a senior will be as good as dead.” Why? Because speaking disrepectfully to one’s elders is as good as killing them – a cultural, a civilizational message that continues to this day in India in admonishments to the young and brash to be respectful to one’s elders, but on which has under severe attack from the proponents of modernity. Arjuna seized upon this advice, and proceeded to berate his brother, using words, “the likes of which he had never spoken earlier.”

And what exactly were those unprecedented words? Let’s see a sample of those:

– “You are cruel and your strength is in your speech. You think I am also like you.”

– “I have killed maharathas for your sake. But you lie down on Droupadi’s bed and slight me.”

– “You are suspicious and cruel.”

– “Since you are addicted to the vice of gambling, I am not delighted at the prospect of your winning back the kingdom.”

And so on… These were indeed cruel words. Perhaps Arjuna was using this opportunity of giving vent to some of his inner feelings and frustration? One wonders.

In any case, an in a most comedic turn of affairs, after having “insulted” his elder brother, Arjuna had once again unsheathed his sword! This time it was on account of his grief and distress at having insulted his brother. Krishna had an answer for this also. The solution? For Arjuna to “tell him about your own qualities now. Thereby, you will kill yourself today.” [Dr. Debroy writes in the footnote that “self-praise is like killing one’s own self.”] Arjuna then praised himself, in fulsome terms. And that was the end of the matter. The two brothers embraced each other, and the battle resumed.

Note here how Krishna managed to defuse the potentially deadly situation using the wizardry of his words. First, by asking Arjuna to explain why he had unsheathed his sword, he also gave him time to calm down and reflect on his course of action. Once Arjuna was wavering – he asked Krishna for advice – Krishna stepped in with his words. Rather than let Arjuna, or for that matter Yudhishthira, lose face, Krishna allowed Arjuna to both fulfill his promise and then to also atone for having insulted his brother. In this manner, the younger brother’s anger was calmed, and the elder brother’s respect was also maintained. Not every quarrel needed to be resolved with the use of the sword. Even if that lesson needed to be taught in the middle of the most bloody of all wars!

Note: The events described here take place in chapters 47 through 49 of the Karna Parva (the Karna vadha upa Parva) of the Mahabharata. In the major parvas, Karna Parva is the eighth parva, while in the minor parvas, Karna-vadha Parva is the seventy-third parva. I have used Dr Bibek Debroy’s Mahabharata, Vol. 7, an unabridged translation of the Critical Edition of the Mahabharata, published by Penguin India in 2013, as my reference.