Can India Embarrass China In A Limited Military Conflict? 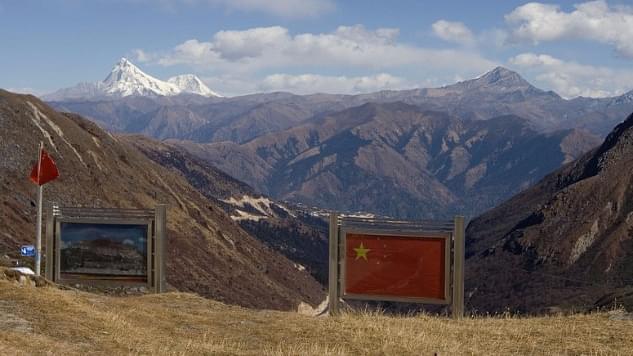 Picture of the Patola Palace, left, and the Chinese flag, on the Chinese side of the international border at Nathula Pass, in Sikkim. (Shayon Ghosh/Flickr)

On 18 July, the South China Morning Post reported that China's People’s Liberation Army (PLA) had moved “tens of thousands of tonnes of military vehicles and equipment into Tibet”, quoting the PLA mouthpiece. Many such moves in the past one week, seen in the light of aggressive statements made by China’s foreign ministry and the blatant warmongering rhetoric from the country’s state-owned media, has triggered a debate in India. Although reports suggest that the PLA has not mobilised troops towards the border with India and that the recent live-fire exercise in Tibet was a routine affair – putting off the chances of a full-blown military conflict, prospects of a peaceful walk-back from the brink appear to be shrinking with every passing day.

Though the Doklam crisis will most likely not lead to war, a localised conflict is indeed possible if the PLA decides to up the ante – something China recently indicated as possible.

Under these circumstances, the question that arises is if India can ward off a limited Chinese attack along the Line of Actual Control (LAC) or the international boundary in Sikkim. The answer lies in analysing force concentration and capabilities that the two countries bring to bear on the common border.

There are some misconceptions about the military balance along the Sino-Indian border. The most common of these is that China’s localised military strength along the border far outweighs India’s. However, studying the deployment of troops and air assets along the border, and particularly in Sikkim – the site of the current stand-off, one arrives at an entirely different picture.

The Indian Army has nine of its 12 mountain divisions deployed in the eastern sector. Each of these divisions usually consists of 15,500 combat troops and 8,000 support elements. Of these, three divisions – seventeenth, twenty-seventh and twentieth – are deployed near the India-China-Bhutan tri-junction, the site of the ongoing stand-off. These divisions are based in Gangtok (Sikkim), Binnaguri (West Bengal) and Kalimpong (West Bengal) respectively, guarding India’s vulnerable chicken’s neck, the Siliguri Corridor, which connects seven northeastern states with the rest of India.

In the western sector, India has an infantry division and a mountain division. While the former is stationed in Leh, the latter is based in Dras. India also has an armoured brigade (with over 100 T-72 tanks) to cover the flat approaches from Tibet towards India’s crucial defences at Chushul.

The Indian side of the LAC in Ladakh sector is much more conducive for mechanised warfare than the Chinese side. In the Sino-Indian war of 1962, six vintage AMX-13 tanks of the Indian Army, which were airlifted to Chushul, inflicted severe losses and delay on the advancing Chinese Army.

In comparison, China has deployed a mechanised infantry division based in Hotan in the Xinjiang Autonomous Region, north of Askai Chin – a part of Jammu and Kashmir that China currently occupies and claims as its own.

Therefore, in terms of the number of troops deployed close to the boundary in both eastern and western sectors, India possesses a clear advantage.

However, a simple bean-counting approach to the Sino-Indian military balance has limits. China’s newly carved out the western theatre command, which is tasked all along the Sino-Indian border, is known to have three Group Armies (corps-level military formations). Although stationed away from the border, China’s superior infrastructure allows it to quickly move troops, such as its Rapid Reaction Forces (RRF) that it has raised in the last two decades, to the conflict zone. By some accounts, China can use RRF groups based in its western theatre against India within three to five days of having taken a decision to do so. This will erode the advantage that India has in terms of the number of troops deployed close to the border. China has built oxygen-rich, hyperbaric chambers in order to quickly acclimatise the forces it will bring to the war front.

While India has made some progress in terms of infrastructure development in certain areas such as Arunachal Pradesh, most of its strategically important roads and railway lines being built close to borders have faced considerable delay. That India has a lot of catching up to do is undisputed.

As many as 31 Indian airfields – nine in the western and 22 in the eastern sector – are located close to the LAC. These include air bases in Leh, Jalpaiguri (closest Indian air base to the Chumbi Valley), Chabua (Assam) and Tezpur (Assam). Bases in Chabua and Tezpur are particularly important because of their proximity to the LAC and the presence of the front-line Sukhoi-30MKI fighters. Indian airbases in the northern plains, including those in West Bengal, can be used against China.

In addition, India has multiple advance landing grounds (ALG), such as the one in Daulat Beg Oldi (Ladakh), on which it has landed its heavy-lift aircraft. In the past few years, the Indian Air Force (IAF) has also operationalised multiple ALGs in Arunachal Pradesh and Ladakh, most recently in Ziro and Along. These ALGs augment IAF’s ability to operate from forward areas.

In comparison, the People’s Liberation Army Air Force (PLAAF) has nine major airfields in its western theatre command, which it can use to launch conventional air operations against India. These include bases in Hoping, Bangda, Shiquanhe, Bayixincun (facing Arunachal Pradesh) and Kongka. China also has airfields in Lhasa, Shannan and XIgaze, which it can make operational in short time. One of its bases in Tibet's Nyingchi prefecture is just 30km away from Arunachal Pradesh. It also has a score of tactical airstrips and helipads spread across the region.

However, most of PLAAF’s air bases in Tibet are located at an altitude of 4,500 metres. This puts the PLAAF in a competitive disadvantage vis-à-vis IAF when deploying fighter jets on the Tibetan plateau because the load-carrying capability of the jets degrades significantly when they take off from bases at high altitudes. Due to reduced payload, the PLAAF has to cut down on the amount of ammunition and quantity of fuel its fighter jets can carry, significantly affecting its combat capabilities. The IAF, on the other hand, can operate with ease from its many airfields located in the plains in both the western and eastern theatres without compromising on its payload capabilities.

Lack of support infrastructure in air bases on the Tibetan Plateau is also a concern for the PLAAF. Most of these bases lack hardened shelters to protect aircraft on the ground, leaving them vulnerable to attacks. Rudimentary support infrastructure would make it difficult for the PLAAF to carry out large-scale air operations in a sustained manner.

In the Chengdu military region facing Arunachal and Lanzhou military region facing Jammu and Kashmir, which have now been largely merged to form the new western command, the PLAAF is know to have four fighter divisions, one transport division and one bomber division. All these divisions are currently based outside Tibet. Due to the lack of support infrastructure on the Tibetan plateau, the PLAAF cannot bring all of its air capabilities to the region. This significantly erodes the quantitative advantage that the PLAAF enjoys over the IAF. Moreover, the relatively long lines of communication for Chinese forces, strung across Tibet, would be vulnerable to interdiction by the IAF.

In comparison, most Indian air bases in both eastern and western sectors have sufficient support infrastructure, including reinforced aircraft hangars.

Therefore, India possesses an edge in air power along the LAC. However, the advantages that India has are eroding rapidly, largely due to the decreasing size of India’s fighter fleet and the deployment of China’s integrated air defence network in Tibet. By 2025, China will likely have more airfields in the wider Tibetan region, significantly increasing its ability to use air power against India.

In the broader sense, China has a numerical advantage over India in almost every area. But, along the border, India enjoys both operational and numerical superiority. This is clear when one looks at the character of force deployment and capabilities that the two countries bring to bear along the common border. So, can India embarrass China in a limited military conflict along the border? It likely can.

Former national security adviser Shivashankar Menon, in his book Choices, argues along similar lines. Beijing, Menon writes, backed down in the 2013 incursion at the Depsang valley in Kashmir’s Ladakh region “because of India’s improved capabilities, which left the Chinese in no doubt that India could embarrass them”.

India’s diplomatic efforts, he states, “have focused on convincing China that any misadventure would result in embarrassment and pain”.