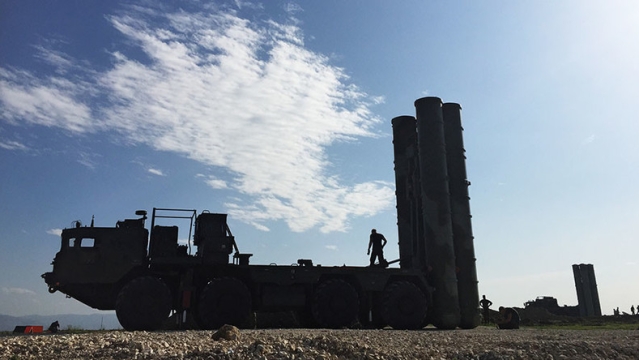 An S-400 air defence missile system is deployed for combat duty at the Hmeymim airbase in Syria. (Dmitriy Vinogradov/Sputnik)

When a Russian Sukhoi Su-24, an all-weather attack aircraft on a mission in northern Syria, was shot down by a Turkish F-16 in November 2015 for alleged airspace violation, Russia responded by deploying its formidable S-400 Triumf air defence system in the region. The move pushed the Turkish Air Force out of Syrian airspace while forcing the United States (US) to change tack. The same could happen in Asia once the S-400 system takes up duty defending the Indian skies.

The S-400 is a mobile, surface-to-air missile system that shoots down incoming aerial threats such as aircraft, drones, and cruise and ballistic missiles. It has been designed to offer a layered defence using four different missiles – the very long range 40N6E-series (400 km), the long range 48N6 (250 km), the 9m96e2 (120 km) and the short range 9m96e (40 km). With a tracking range of 600 km, the missile system can engage up to 36 targets simultaneously within a range of 400 km and an altitude of up to 185 km. The US Patriot missile defence system, in comparison, supports only one interceptor missile within a range of 96 km.

The 9m96e2 missile is the jewel of the system. Flying at Mach 15 and manoeuvring up to 20g, the missile is capable of engaging targets as low as five metres off the ground. It can knock out penetrating aircraft and cruise missiles that may be flying just above the ground to avoid detection by radars.

But there is more. The S-400 system comes with optional acquisition radars (such as 59N6 Protivnik GE and 67N6 Gamma DE in the L-band, the 1L119 Nebo SVU in the VHF band, and the multiband Nebo M), which have been designed to track down modern stealth aircraft. Moreover, the system’s jamming-resistant radars and ability to track a large number of targets make it more effective against drone swarms than other missile defence systems in use.

Russian deployment of the system in Syria significantly limited the action of the US and Turkish Air Force in support of the ‘rebels’. By some accounts, when the US decided to respond to Bashar al-Assad’s alleged use of chemical weapons, the presence of S-400 systems in Syria influenced its choice. The US may have chosen to use Tomahawk missiles in place of strike aircraft to minimise potential losses.

But China Has Those Already

The fact that China will have this capability much before India does (China has started taking deliveries of its first system under a deal signed in 2014) has prompted many to question the utility of the system and its place in India’s defence. The question is fair, but it is based on a misconceived notion that Beijing will bring to bear its best military assets along the border with India. Although it has a disputed border with India, China’s main focus has remained the security of its population and industrial centres along its eastern coast, where it faces threats from the US. This is where China is expected to deploy its six S-400 systems.

The deployment of Terminal High-Altitude Area Defence (THAAD) anti-ballistic missile system by the US in South Korea in 2017 to defend against North Korean missiles has upset China. After the system was operationally deployed in 2017, China had contended that it would undermine its nuclear deterrent capability by degrading its ability to carry out a nuclear second strike in a war against the US. Beijing had hinted at improving its anti-missile capabilities in response, and the S-400 systems that it is acquiring, could be used for this purpose.

Therefore, China’s western flank will not be under the cover of the S-400s. Despite their mobility, the systems are unlikely to be parked by China, to its border with India in the event of a conflict for fear of exposing its coastal flank to attacks.

The number of S-400 systems India will acquire and how it plans to use them is not precisely known. Reports suggest New Delhi could procure up to five systems and may deploy at least two on the border with China. These would, in theory, block incoming missiles and aircraft from the Chinese mainland.

All that said, it should be noted that China’s western flank will not lie defenceless. China has around 15 divisions of the S-400's predecessor system, the S-300. At least one S-300 system has been deployed in Tibet since 2010, giving China limited ballistic missile defence capability in the region. China has also developed surface-to-air missile systems such as HQ-16, HQ-12 and HQ-9, which have been deployed in Tibet. These systems, however, are not as effective as the S-400s.

With the rough terrain on the border making movement of large-scale ground forces difficult, any major Chinese attack would come with a large aerial offensive that would include missiles, fighter jets and drones. With India using S-400s along the border, it would be better placed to neutralise these threats than China, which would use less-effective systems to tackle Indian attacks. Thus, the S-400s will give India some advantage over China and acts as a major deterrent.

How will it affect the matrix with Pakistan?

India may deploy at least three of its S-400 systems along the border with Pakistan, mostly to strike down incoming ballistic missiles. Pakistan’s territory will be swept by the S-400’s jamming-resistant radar. Given its lack of depth, any missile fired from Pakistan would come into the 600 km tracking range of the S-400 system almost immediately. This would give the system the longest possible time to respond and strike down the incoming threat.

The same is true for any fighter jet, unmanned aerial vehicle and cruise missile that Pakistan may try to use against India in the event of a conflict.

“A posse of F-16 jet fighters takes off from the Pakistan Air Force (PAF) base in Sargodha. Approximately 300 km east, at the Adampur air force base, an Indian S-400 system picks up these aircraft instantly. The radar lock unnerves the F-16 pilots and they peel further west – away from the battery’s range. While taking evasive action the PAF jets have to be careful not to stray into Afghanistan – which is increasingly hostile towards Islamabad – or Iran. The Pakistani pilots, however, realise trespass is the least of their problems. As the F-16s arrive over Balochistan – the furthest they can get away from the Indian border – they are tracked by another S-400 battery stationed near the Jodhpur air force base 527 km away.The S-400 systems are routinely scanning the airspace around them in a 360 degree sweep, but the PAF pilots are on the verge of panic. Between the overlapping coverage by India’s multiple S-400 battalions stationed along the border, PAF aircraft can run but not hide. This is the fishbowl effect – the feeling of being observed from all sides.”

Pakistan’s plan to use battlefield nuclear weapons during a conflict will also be affected by the deployment of these systems. Military planners in Pakistan have often contended that they would use battlefield weapons on their soil to halt Indian thrust, bringing down the threshold of a nuclear war. These weapons, if fired, can theoretically be detected by the S-400 system and destroyed swiftly.

To penetrate the S-400 cover, Pakistan would need to use a large number of missiles, fighters or drones (to overwhelm the system’s tracking capability). This would prove prohibitively expensive for Pakistan.

Therefore, the deployment of the S-400 systems would dramatically affect Pakistan’s strategy against India, forcing it to change its tactics. Some of these effects are already visible, with Pakistan rushing to induct Chinese surface-to-air missile systems to strengthen its defences.

That said, all air defence systems around the world, including the S-400, remain largely untested in real battlefield environments. These systems aren’t 100 per cent effective, and it is unclear as to whether they can track and eliminate all incoming threats.