Storming The Sky In The Sukhoi, Nirmala Sitharaman Sets Another Benchmark 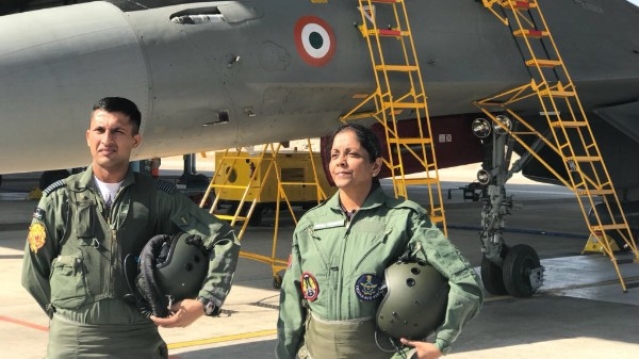 Nirmala Sitharaman is the country’s first woman defence minister to fly in the Su-30 MKI.

She has been to the snow-clad mountains and visited the tidal shores. It was only about time she got her way around the fighter planes. She’s not your average defence minster; she is India’s stereotype-smashing icon – Nirmala Sitharaman.

As the country’s first woman defence minister to fly in the Su-30 MKI, the hands-on minister has in her own way paved the way for many more female fighter pilots in the Indian Air Force (IAF).

An aware and up-to-date minister, Sitharaman has never stayed at the back foot when such technological advances are made in any sectors of the three forces.

Creating history yet again, Sitharaman on Wednesday (17 January) donned the uniform and became the first woman defence minister of India to fly a sortie in an IAF Sukhoi (Su-30 MKI) fighter aircraft.

After her recent visit to INS Vikramaditya, the aircraft carrier of the Indian Navy, Defence Minister Sitharaman, on her visit to Air Force Station, Jodhpur, on Wednesday morning (17 January) took to the skies in the formidable Su-30 MKI fighter aircraft of 31 Squadron.

In her 45 minutes of sortie, some of the unique characteristics and strengths of this mighty twin-engine Air Superiority Fighter (ASF) were demonstrated for her.

After crossing the speed of sound and flying taller than even Mt Everest, as soon as her feet landed on the ground, the minister spoke of the memorable experience that it was. As per reports, a Sukhoi-30 is capable of achieving a maximum speed of 2,100 km/hr – nearly four times more than a commercial airliner.

“It was an eye-opening experience to see what level of alertness is exhibited by our pilots. It also tells me what rigour and level of practice, and with what readiness and how quickly they have to respond to situations,” said Sitharaman after the sortie.

To gauge the operational capability and preparedness of the defence forces, the Defence Minister has been visiting various establishments of the Armed Forces.

These visits go a long way in enhancing the motivation of the defence personnel as they get an opportunity to personally interact with the minister herself.

After her sortie on the multirole ASF, she addressed and interacted with the air warriors of Air Force Station, Jodhpur, and congratulated them on their professionalism, high state of morale and motivation.

During the visit, she was also briefed on employment of air power in the defence of our country.

Another noteworthy feature of this aircraft is that one-sixth of the SU air structures and frame are made in India by the Bengaluru-based Dynamatic Technologies Ltd in their facilities inside HAL Nasik, under a public-private partnership.

The 100th ship set was recently handed over by Udayant Malhoutra, managing director and chief executive officer to Hindustan Aeronautics Ltd in the presence of Minister of State for Defence, Subhash Bhamre, recently.

Owing to its versatile capabilities, Su-30 MKI forms an integral and the most potent component of our nation’s air power.

A pioneer project of the Make in India campaign for defence, the state-of-the-art machine has truly defined the growth of the indigenous industry in the equipment sector.

With these advancements, the reach with air-to-air refueling and standoff performance, Su-30 MKI is a truly potent platform and is bolstering IAF’s strategic capabilities.