Food Subsidy: Centre May Be Winding Down On Cash Transfers 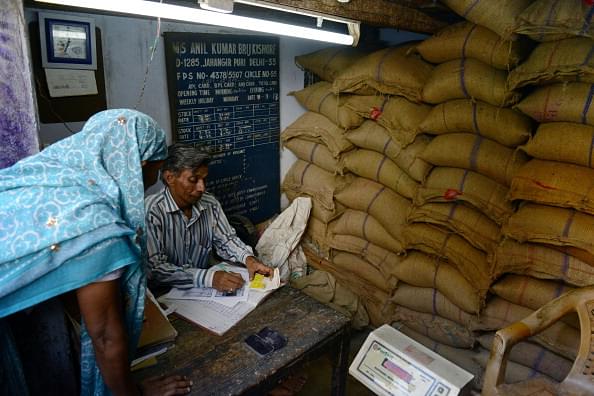 A vendor processes the ration card of an Indian woman at his Fair Price Shop, a government food dispensary in the northern district of Jahangirpuri of New Delhi. (ROBERTO SCHMIDT/AFP/Getty Images)

Petroleum Minister Dharmendra Pradhan has declared that the government has saved close to Rs 21,000 crore on the LPG subsidy bill ever since PAHAL – the direct transfer of subsidy on cooking gas cylinders – was launched two years ago. This, he is reported to have said at the Asia LPG Summit curtain-raiser event, was thanks to weeding out of 3.3 million ghost accounts. It’s not clear if this includes those with income above Rs 10 lakh who have been denied the subsidy, but that’s a minor quibble. If these numbers are correct, the government certainly deserves applause.

The linking of subsidy payouts with Aadhaar-linked bank accounts has, undoubtedly, eliminated a large number of duplicate and even multiple connections. The government has also encouraged people to give up their LPG subsidy and, as of 8 February, another 10 million have done so.

Thanks to the recasting of the LPG subsidy delivery and the deregulation of diesel prices (and helped enormously by declining global oil prices since mid-2014), this government has managed to bring down the petroleum subsidy bill from Rs 60,269 crore in 2014-15 to Rs 27,532 crore in the revised estimates of 2016-17. The petroleum subsidy for 2017-18 has been budgeted at Rs 25,000 crore, 9 per cent lower.

Global oil prices are starting to harden again and it’s not clear whether the government can keep to this budget target. Even if it doesn’t, the LPG subsidy bill is hardly likely to touch pre-2015-16 levels immediately.

What are the chances of the LPG subsidy success story being replicated in the case of the food subsidy bill, which alone is 50 per cent of the total subsidy bill? Unfortunately, perhaps not very much.

After PAHAL, the most radical move the Narendra Modi government took on the subsidy front was to kick off pilot programmes on cash transfers in lieu of subsidised food grains from ration shops in Chandigarh, Puducherry and Dadra and Nagar Haveli. The programmes in Chandigarh and Puducherry have been going on for close to 18 months, while that in Dadra and Nagar Haveli is a year old. And these experiments may remain just that; the chances of these being extended to other places are dim. Reason: there’s practically no take-up by state governments.

Remember, the public distribution system is a subject that is solely within the states’ jurisdiction. The central government can do nothing more than nudge them to innovate or experiment.

In 2015, the union ministry of food, public distribution and consumer affairs wrote to all state governments and Union Territories asking them if they were interested in participating in experiments in delivering food subsidy. They were given three choices: continue with the old system of food grain delivery through ration shops, opt for the LPG model of direct benefit transfer (ration shops would sell rice/wheat at market rates and the subsidy would be credited into the bank accounts of beneficiaries) or an outright cash transfer instead of subsidised food grains.

No state government – not even from BJP-ruled states – has come forward. The pilots under way got going because all three locations are Union Territories and more amenable to influence by the central government. There is little that the centre can do to arm-twist state governments to switch to cash transfers. (Incidentally, this problem arises also in the kerosene subsidy. Kerosene is distributed through the state public distribution system and so the centre has little leverage; a BJP government in Jharkhand is the only one that has taken up a cash transfer pilot in this.)

What has also queered the pitch is media reports quoting a study done for the Niti Aayog that showed the cash transfers programme was not working well. The report is not in the public domain but Swarajya had done detailed reports from the field on the pilots in Chandigarh and Puducherry. There were problems (more in Chandigarh than in Puducherry), but these were last-mile implementation issues that are not insurmountable. But government officials admit that the aggressive push for cash transfers in food has tapered down.

Instead, the centre seems to be going along with state governments who are going flat out to curb leakages through biometrics-based point of sale (POS) machines. Under this, card holders have to physically go to ration shops to buy their food grains (or send designated members of the family) and authenticate their identity through the POS machines. This makes impersonation and consequent leakage/diversion near-impossible (though activists have pointed to other problems of people without Aadhaar or whose biometrics can’t be authenticated). The Economic Survey 2015-16 published in February 2016 had acknowledged that the JAM trinity faced challenges and that BAPU (biometrically authenticated physical uptake) could be a way out. The union food and public distribution department laid out a slew of incentives for this.

Andhra Pradesh has been the clear leader in this area, with 100 per cent adoption of POS-based sales of subsidised food grains through ration shops for more than a year now. Other states that have high adoption rates of POS are Gujarat, Rajasthan, Haryana and Jharkhand. Among the Union Territories, Puducherry had near-universal coverage of POS even before the cash transfers pilot kicked off. Maharashtra is reported to be keen on a big POS push.

On the face of it, anything which curbs leakages should be welcomed without reservation. And, in the absence of a robust cash transfer system, people should not be denied subsidised rations. But is the more efficient delivery of food grains the best way to administer a food subsidy programme? That will mean continuing with government procurement with all its associated problems and increased costs (storage, transportation and other incidentals). There’s been a lot of emphasis by the union food and public distribution department on end-to-end computerisation of the public distribution system.

There is a strong case for a complete recasting of the way food security is ensured; tweaking the existing system will not suffice. But the opportunity for cash transfers in food appears to have been lost for now.